In Search Of Peace, 150 Years After The Civil War 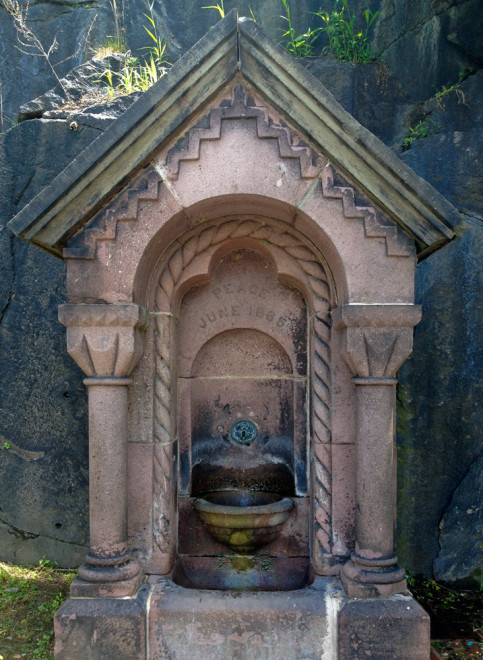 PEACE, JUNE 1865: Exactly 150 years ago, this fountain at the Fairmount Water Works was dedicated to mark the end of the deadliest war in our country’s history, the one that began four years earlier in Charleston, South Carolina. In those 150 years, grounded in the self-evident truths that all men are created equal, we’ve made great strides toward providing personal, religious, and expressive freedoms for ALL, while healing the horrible wounds cut from an inherited belief of supremacy, and worse, flat out hatred. Clearly, we gotta keep going.

The hatred still simmers, usually masquerading as nostalgia in the places that wave the Confederate flag. A flag, of course, that represents the failed, short-lived country established out of the Southern idea their “states’ rights” were being violated—states’ rights that all, obviously, boiled down to the continuation of slavery. In spite of the supposed importance of states’ rights, that failed country still adopted a federal-level constitution, copied and altered after our own, to explicitly allow slavery.

Most often, the hatred rears itself in an aw-shucks, “that’s just our heritage” kind of way, in places like Stone Mountain, Georgia, where they have laser shows over the world’s largest bas-relief sculpture, carved out of the quartz monzonite dome to represent three leaders of the failed country that fought to keep slavery alive (and where the Ku Klux Klan found its footing 50 years after the end of the war).

But as we learned two nights ago, the hatred sometimes runs so deep that a person will act alone, probably because he couldn’t convince anyone else to manifest a similar hatred, and actually declare his own Civil War, a term he chose intentionally for its historic connotation. Nine black people are dead because one white person just could not accept that the freedom he lived could also be lived by people unlike himself, a century and a half after a bloody war was fought, and decided, to determine just that.

Wednesday’s heinous terrorist attack was premeditated, its location no mistake. The perpetrator patiently ingratiated himself for an hour before opening fire on the church’s evening prayer group at Emanuel African Methodist Episcopal Church, called “Mother Emanuel” for its symbolic importance to the African American community of the South.

The Charleston church, founded in 1818, is the oldest A.M.E. church in the South, with strong and deep ties to Bishop Richard Allen and the Mother Bethel A.M.E. Church at Sixth & Lombard Streets. Morris Brown, Emanuel’s founder, risked his life to provide the freedom of worship to the black community in Charleston, long the capital of the slave trade. In 1822, after a slave uprising in which he was implicated, Brown fled South Carolina for Philadelphia, where Allen provided him refuge. When Allen died in 1831, Brown took over the pastorate and became the second bishop of the A.M.E. Church. He died in Philadelphia in 1849.

Last night, Mother Bethel’s Pastor Mark Kelly Tyler led a multi-ecumenical service of prayer and healing. In 2013, along with Phil Katz (whose father Sam produces the Philadelphia: The Great Experiment series, where Hidden City’s Nathaniel Popkin is senior writer), Pastor Tyler produced this moving interview with Clementa Pinckney, Mother Emanuel’s pastor who was slain on Wednesday, as part of a documentary under production on the A.M.E. Church in South Carolina.

One hundred fifty years after the end of the Civil War, everything it was fought for, we must fight for still. I wonder where this conversation will be in another 150 years.