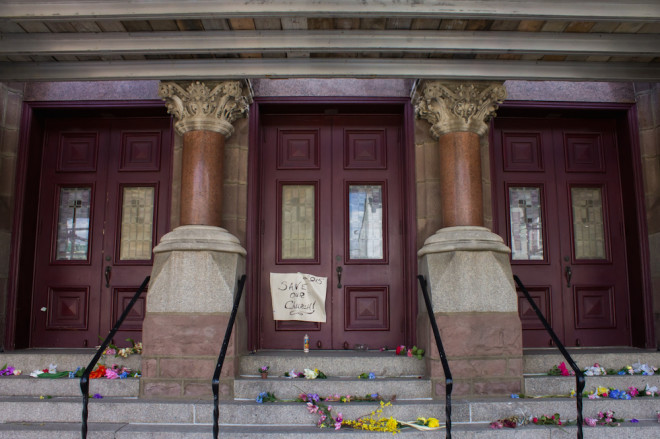 St. Laurentius Roman Catholic Church in Fishtown moved one crucial step closer to being protected from the wrecking ball today when the Historical Commission’s Committee on Historic Designation unanimously ruled in favor of recommending the Edwin Forrest Durang-designed Gothic sanctuary to be considered for historic designation by the full Commission at their meeting on July 12. Buildings listed on the Philadelphia Register of Historic Places are legally protected from demolition.

Committee members said their decision was based on the building meeting all criteria for being historically significant. Namely, that the church–the first Polish national Catholic parish in Philadelphia–was unique and a familiar visual feature of the city, that it represented the cultural and social character of the neighborhood, and that the building has architectural significance.

Room 578 in City Hall was packed with passionate parishioners and members of the Polish community. Heartfelt testimony was shared, relating deep family ties that, for some, date back generations. Sandy Salzman, executive director of New Kensington Community Development Corporation, said that St. Laurentius is a touchstone of the neighborhood. She went on to recount an important life event of her own at the church. “The night I got engaged I was so excited I went and showed everyone at Midnight Mass the ring,” said Salzman. 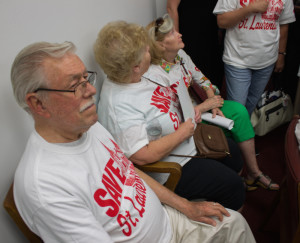 A packed house: More than 20 parishioners and outside supporters showed up in support for St. Laurentius | Photo: Michael Bixler

Others, like preservation engineer Justin Spivey and Debroah Majka, honorary consul of The Republic of Poland for Southeastern Pennsylvania, gave architectural and historic context to the 133 year old church, which was built at Memphis and East Berks Streets with small donations collected over time by Philadelphia’s oldest Polish parish.

The Archdiocese of Philadelphia deconsecrated St. Laurentius and all sacred objects were removed from inside of the church to a storage facility in Overbrook last October–a move seen as preparatory to demolition of the church. Holy Name of Jesus Parish, owner of the now vacant sanctuary and with whom St. Laurentius Parish merged with in July of 2013, contracted O’Donnell & Naccarato for an engineering assessment of the structure. The firm’s report claims that the two feet deep façade—brownstone on the exterior and shist in the interior—has been compromised by age and weather and that the facestone is not stable enough for public safety, citing vertical cracks in the stone and poorly completed masonry repairs.

Holy Name representative Michael Phillips said that full restoration for the church would require an estimated cost of $2-3 million, whereas demolition could be done for around $1 million. Estimates for stabilization in the report by O’Donnell & Naccarato hovered around $5-700,00.