Then And Now: North Broad And Lehigh 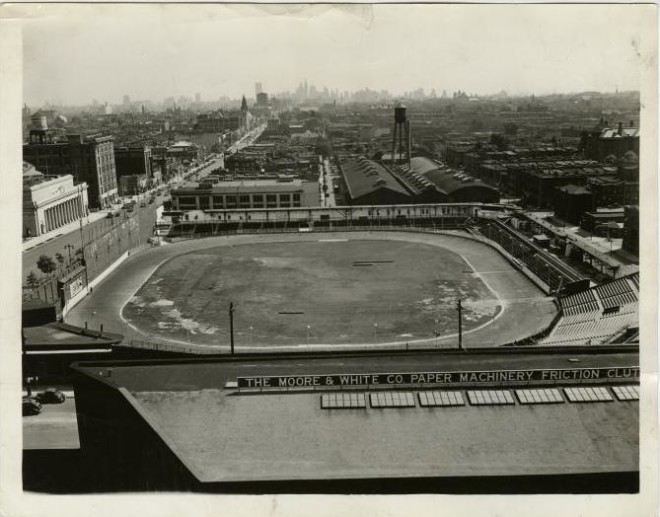 Baker Bowl, the first home field of the Philadelphia Phillies after it was converted into a racetrack, 1939 | Courtesy of the Historical Society of Philadelphia

The city block stretching from West Lehigh Avenue, North Fifteenth, North Broad, and West Huntingdon Streets in North Philadelphia was not always filled with car horns and busy pedestrians. The block once rumbled with shouting sports fans at Baker Bowl, the original home field of the Philadelphia Phillies and Philadelphia Eagles. The stadium was praised for its state-of-the-art design. Baker Bowl also hosted several historically significant events that deepened Philadelphia’s affection for the stadium even more. 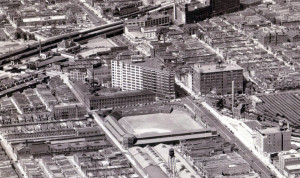 Phillies owners A.J. Reach and John Rogers paid $80,000 to erect National League Park, with capacity for about 12,500 fans, in 1885. The local media commended the stadium as the design followed every inch of the rule book—the sweeping curve behind the plate was approximately 60 feet, whereas some stadiums at the time more or less “estimated” the measurements. Within seven years, the wooden structure erupted in flames and in 1895 the Phillies put up a steel and brick stadium, making it one of the first reinforced steel and concrete baseball venues at that time. The new and improved modern stadium featured the first cantilevered upper deck in stadium construction.

A Stadium of Firsts 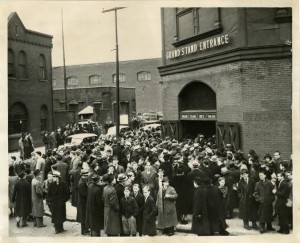 Crow gathered outside the Grand Stand Entrance to the Baker Bowl, 1937 | Courtesy of the Historical Society of Philadelphia

In 1915, President Woodrow Wilson was the first U.S. president to attend a World Series. He threw the ceremonial first pitch at Baker Bowl before the second game against the American League Boston Red Sox. (Boston won 2-1 and each of the following games of the series by the same score.)

Babe Ruth made his first post-season appearance at the stadium and would play his last professional game there in May, 1935.

Baker Bowl hosted several Negro League World Series games on its field from 1924 to 1925, including the first two games of the 1924 series between the Hilldale Daisies and the Kansas City Monarchs.

The Philadelphia Eagles soon marked their territory at the stadium, making it one of the first home fields of their football club. Under owner Bert Bell, the Eagles played there for three years. Bell initially wanted to play home games at the larger and more updated Shibe Park, but instead agreed to make a deal with Phillies’ owner Gerry Nugent. The Eagles played their first game at Baker Bowl on October 3, 1933 against a U.S. Marines team–a 40-0 pre-season victory for the Eagles. In the late 1930s the ballpark’s conditions steadily declined, forcing the football team to move to Municipal Stadium in 1935.

In 1938, The Phillies broke their lease at the deteriorating stadium mid-season and moved into Shibe Park to finish the year. After remaining vacant for several years, Baker Bowl was razed in 1950. (Playing full seasons there from 1885 to 1937, the team record was 3,800 wins and 3,836 losses.) 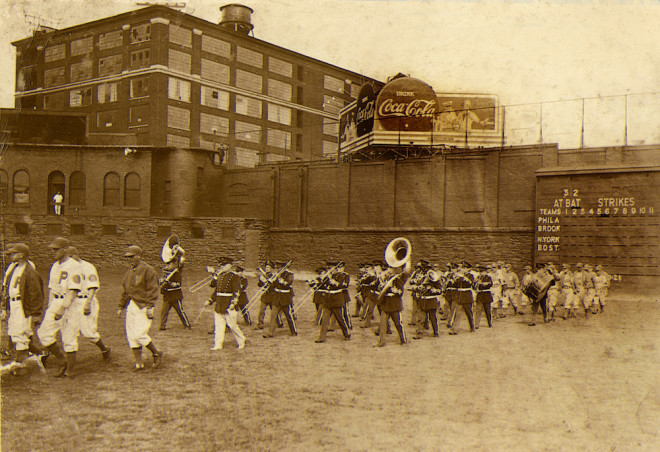 Season opener of the last season the Phillies would play at Baker Bowl before relocating to Shibe Park | Photo: explorepahistory.com

The Philadelphia and Reading Railroad constructed its Horace Trumbauer-designed neoclassical North Broad Street Station Across Broad Street from Baker Bowl in 1928. (The Phillies finished 43-109 that year, eighth place in the National League, 51 games behind the first place St. Louis Cardinals and drew only 182,168 fans to Baker Bowl.) North Broad Station (still extant) sat directly across from the end of the first base grandstand. Home plate was at the corner of North 15th and West Huntingdon Streets. Where much of the outfield was is now the sprawling 79,132 square foot, mid-century Broad Garage–a bus dispatch and transportation services hub built in 1967 for the School District of Philadelphia. The depot is one of three bus garages operated by the School District. Buses are dispatched from a central operations room at District Headquarters twenty blocks away. 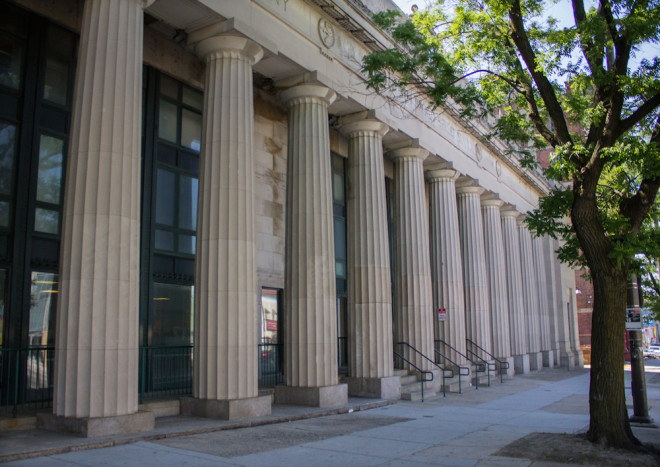 The 10 story, 500,000 square foot Philadelphia Ford Motor Company assembly plant stood across Lehigh Avenue just beyond the outfield wall. This triangular-shaped building manufactured approximately 150 cars daily. Following the First World War, Ford put the original plant at Broad and Lehigh up for sale after upgrading to a newer, larger plant on the Chester waterfront. In 1925, the asking price for the building was a rich $1,725,000. 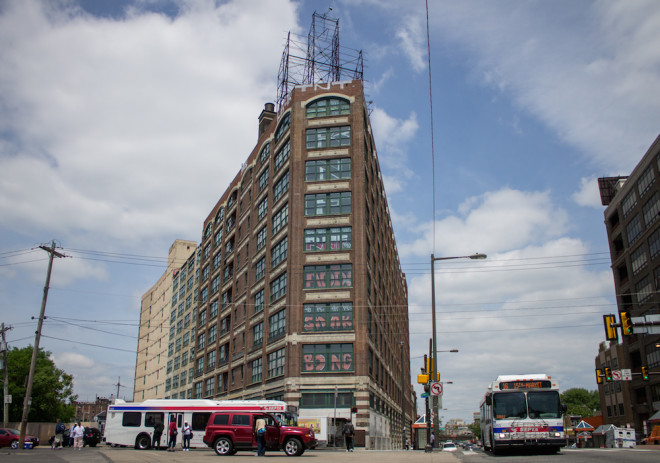 Still vacant and begging for occupancy. The Ford Motor Company building at North Broad and Lehigh once loomed in the background of Baker Bowl | Photo: Michael Bixler

The building was eventually used for US Army storage and a Sears, Roebuck and Company Warehouse. In 1972, Botany Industries purchased the building and began shipping from the Broad and Lehigh location. With fear of building debris falling onto SEPTA regional rail tracks, in 2007 the building was renovated by New York architect Cosmo Veneziale. It’s vacant today. 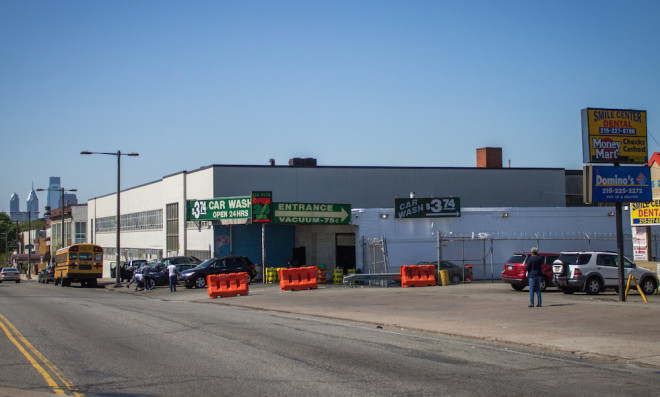 The rest of the old outfield and grandstand is currently a Sunoco gas station and a strip mall that houses a check cashing office, a Domino’s Pizza shop, and a dental office. The $3.74 Car Wash is attached to the School District depot. It isn’t attractive, but then after game one of the 1915 World Series, which the Phillies won 3-1, the team never won another post season game at Baker Bowl, and didn’t win one all together until 1977.