The Stud(ebaker) Of North Broad 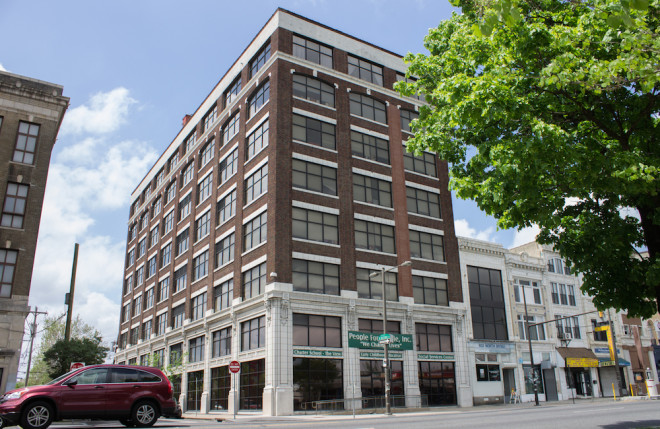 The Studebaker Building at Brown and North Broad Streets had always been used in an automobile-related capacity until People For People Charter School took the helm in 2000 | Photo: Michael Bixler

The successful renovation and re-use of the old Studebaker Building at 800 North Broad Street in 2000 as a social services center was a harbinger that Philadelphia’s early 20th century Automobile Row would endure beyond the automobile age. Now with significant real estate investment in auto and non-auto landmarks between Spring Garden Street and Cecil B. Moore Avenues underway, and new lighting coming, this section of North Broad appears to be zooming back to life.

In early 1917, the Wanamaker Family–owners of the Theophilius Parsons Chandler-designed Hotel Rodman at the Northwest corner of Broad and Brown Street–commissioned architects and engineers William Steele & Sons for a $142,500 seven story hotel. Plans for the new building eventually fell through and the land at 800 North Broad Street was sold. The 65-year-old Studebaker Company took over the project, eager to move their Philadelphia location to the city’s primary Automobile Row from the secondary one located in a series of short garages on South Broad Street, where the company had previously produced horse-drawn carriages. Studebaker hired William Steele & Sons to revise the building design for a $350,000, seven story office and sales center. 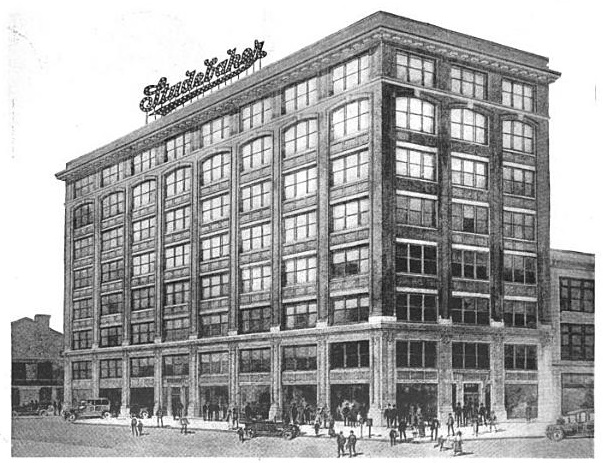 Steele & Sons designed the building for visual appeal despite its utilitarian use, much like their other buildings along North Broad and elsewhere in the city. The auto showroom with its floor-to-ceiling windows trimmed with limestone encompassing the first floor and mezzanine was meant to draw the attention on the busy street. Brown brick carries the facade upward, the sixth floor windows delightfully arched. The building was complete and showcasing Studebaker automobiles by the middle of 1918.

Shortly after the building was finished, during the first World War, Studebaker offered living space to soldiers. Thousands had shown up in Philadelphia; the only shelter they were offered was the 4th floor corridor of City Hall. When the influenza epidemic of 1918 spread through the city that fall, the City’s public health director Wilmer Krusen decided that City Hall was not a safe place for the troops and sought to commandeer the entirety of the new Studebaker Building for temporary refuge.

Studebaker obliged on the condition that the U.S. Government would sign a $45,000 per year lease for a two year period. The company cleared out and converted the building into living quarters. But the government balked at the high rent and only stayed for one month before moving the operation over to a dilapidated four story building at 18th and Race Streets that had been marked for demolition in preparation for the next segment of the new Fairmount Parkway.

Selling Cars From Top To Bottom 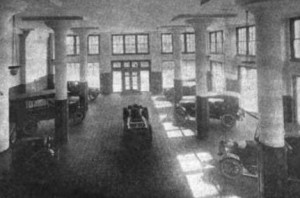 Studebaker only used the building for three years. By 1920, Larson Oldsmobile took over, converting the building into a vertically integrated car manufacturing, repair, and sales center. They built Oldsmobiles on the top floor, repaired them on the fourth, sold used ones on the second, while continuing to operate the retail space as a new car showroom. New cars were assembled on the highest floor and brought by elevator to the bottom floor for sale.

It’s interesting to note that Larson employed a unique way of keeping the showroom free of cigar and cigarette butts (back then known as “squibs”). Each corner was painted with a highly reflective super bright white paint that revealed litter. The theory was that the shame this caused the litter bug would be enough to prevent squibs from accumulating in the showroom’s corners.

Larson Oldsmobile stuck around through the end of the decade. By the 1930s, the building’s remaining office floors from the Studebaker days were used for the back offices of major banks and finance corporations with trophy buildings in what we now call Center City. In the 1940s and early 50s, the building’s manufacturing floors were occupied by numerous textile and printing concerns. 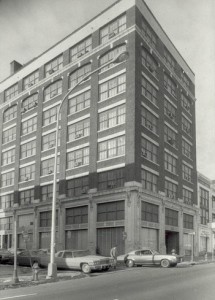 In 1957, the City of Philadelphia took control of 800 North Broad and had city architect Vincent Avellino redesign each floor to be repurposed for a new Philadelphia Traffic Court. This was the role most Philadelphians remember of building, as it operated in this capacity for over three decades. In 1966, the need for even more traffic court space led to the enclosure of the mezzanine, creating a new second floor, making the building eight stories.

At the end of the 1990s, the building was looking dirty, un-used, and abused. However, its salvation was imminent. A few years earlier, Greater Exodus Baptist Church–just south of the structure–had created the non-profit community outreach organization People for People, Inc. The organization eyed the building to be a future headquarters. People for People opened a K-8 charter school in 1999, soon after Pennsylvania passed charter school enabling legislation in 1997.

In 2000, the organization acquired the Studebaker building and proceeded with a head-to-toe renovation under the design of Saxon and Capers Architects. The school opened for the 2001-2002 School Year; President George W. Bush visited in April 2002.

Today, the school occupies floors one through six, with Pre-School in the old auto showroom on the first floor, a cafeteria in the former mezzanine 2nd floor, and classrooms on floors three through six. People for People’s offices and adult education programs occupy the seventh floor, and the building’s current piece de resistance, an event space called “the View”, showcases the eighth floor’s incredible skyline view, including a great catercorner view of the Divine Lorraine.

For (much) more North Broad history and to bear witness to North Broad’s bright future, make sure to check out GroJLart’s Forgotten North Broad Street Tour on June 6th.