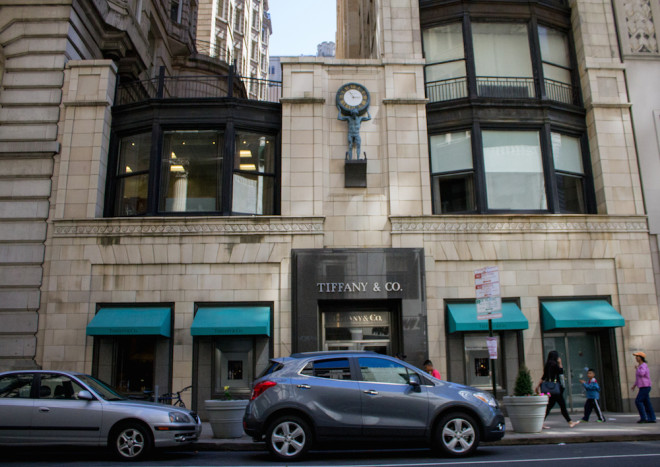 The Bellevue Court Building, right, and the Tiffany & Co. addition that was constructed where the building’s namesake street once connected Walnut and Chancellor Street| Photo: Michael Bixler

The slim office building at 1418 Walnut Street gets more attention today for the Tiffany’s & Co. jewelry store on its ground floor than anything else. Attractive, yet subtle, the structure almost blends into the block in the shadow of the grand Bellevue-Stratford Hotel. Its name, the Bellevue Court Building, refers to a small thoroughfare that once ran adjacent to the building connecting Walnut to Chancellor Street.

The Birth Of Bellevue Court

When the Philadelphia’s showpiece Bellevue-Stratford Hotel was built in 1904 its foundation was extended by 28 feet in the rear of the building in order to support an anticipated future expansion of the structure. Construction began in 1911, and part of the space ended up being used by the cantilevering edge of the Bellevue’s new 19th floor ballroom instead, leaving a 30-foot-wide space between the hotel and 1418 Walnut Street, an old house being used as a lodge for the City Club. The space behind the hotel was paved and became a privately-owned street named Bellevue Court.

While the new addition on the Bellevue was being built, the City Club moved into temporary quarters on the 17th floor of the Real Estate Trust Company Building at 1370 Chestnut Street–currently being renovated by MRP Residential and Principal Real Estate Investors for 220 high-end apartments on the 4th to 17th floors–in anticipation of their move to a new lodge at 313 South Broad Street. The lot where the former lodge stood, along with the site of recently demolished International Records, is currently being developed by SLS International and Dranoff Properties to make way for the residential tower, SLS LUX Philadelphia. 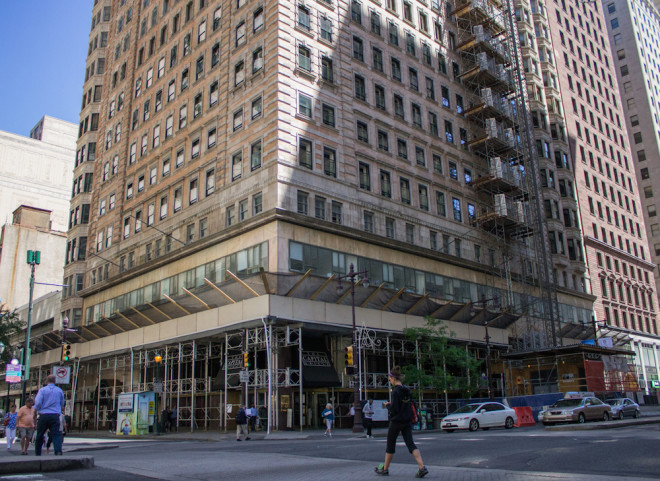 Likely not by coincidence, the Real Estate Trust Company, partnering with an investment firm in the same building, Cramp, Mitchell, and Shober, purchased the City Club’s former clubhouse in 1912 and proposed a slim, nine-story office building to be constructed on its 25′ x 86′ lot. It was to be named the Bellevue Court Building.

Theodore W. Cramp, director of Cramp, Mitchell, and Shober, arranged Cramp & Company as the project’s contractors, a company ran by fellow descendents of distinguished, local shipbuilder William Cramp. It was designed by Horace Trumbauer, who was also responsible for Theodore W. Cramp’s city house and his country estate, Portledge, in Bryn Mawr. The building’s design is not terribly unusual for Trumbauer commercial buildings from this era, but it does have one somewhat unique feature: a row of large bay windows that run up the Walnut Street facade.

Construction permits were issued in February of 1913, and the Bellevue Court Building was open for business by the end of 1914. Its first of numerous office tenants was the American Association of Portland Cement Manufacturers. George A. Huhn & Sons, a banking and brokerage firm, purchased the building and hired Trumbauer to redesign its first floor and basement for a financial institution. They attempted to re-brand the building as the George A. Huhn & Sons Office Building, but the name never stuck. Most of the firms leasing space there still listed “Bellevue Court Building” as their address. 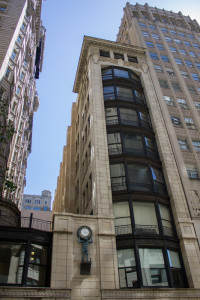 An extensive list of different businesses, organizations, and firms made the Bellevue Court Building their home over the years, but some are especially notable. Commercial fitness gym chains in America are commonly thought to have begun in the 1960s, however the Bellevue Court Building was hosting one on its fifth floor as early as 1914. The Collins System of Physical Culture was a physical education program designed by a science teacher named Charles H. Collins in Chicago in 1905. He incorporated his program into a physical education and exercise business in Philadelphia in 1911. Collins’ gym was one of the Bellevue Court Building’s first tenants–it later moved to a larger space down the street, but kept its space at 1418 Walnut Street for a women’s branch. (The 24-page guide Collins published is viewable at the Historical Society of Pennsylvania.)

Another notable occupant was local architect Ralph Bencker. He began his career in 1917 when he joined the firm, Price & McLanahan, later striking out on his own after splitting with McLanahan in 1925. Bencker designed the delightfully visual architecture associated with the vast group of buildings occupied by Horn & Hardart automats, restaurants, and commissaries in Philadelphia and New York during his time at the Bellevue Court Building.

The Bellevue Court Tavern spent over two decades occupying the rear section of the building’s ground floor retail space, accessible directly from Bellevue Court. It was one of the city’s most popular nightlife venues in the 1940s and lasted well into the 1960s.

In the following decades, use of the building declined. Despite some renovations and alterations by the Albert Greenfield Company in the 1950s, the building was a worn symbol of Philadelphia in a much different time–Penn Center was the city’s new gleaming office nexus. By the beginning of 1980 the building stood vacant. 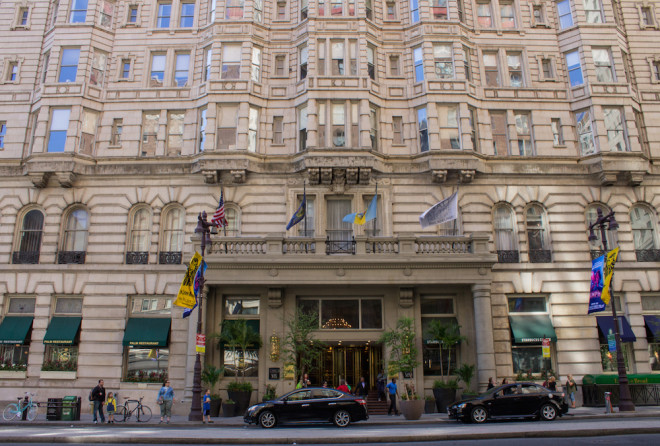 The Bellevue at 200 S. Broad Street. The hotel’s original public space on the ground floor were converted into shops and floors 2 through 11 were repurposed for offices in the early 1990s | Photo: Michael Bixler

Following Richard I. Rubin’s grand restoration of the Bellevue-Stratford after its fall from grace following the fatal Legionnaires’ disease outbreak in 1976–a string of fatal illnesses that infected attendees of an American Legion state convention at the hotel caused by the spread of bacterium Legionella pneumophila through the Bellevue’s air conditioning system–other buildings in the area were also targeted for improvement. Among them was the old Bellevue Court Building. In 1984, Rubin & Company acquired the building and re-activated the first floor. The La Petite Boulangerie chain of French-inspired bakeries set up shop and would stay in the space until 1990, when Rubin’s second renovation of the Bellevue-Stratford into a mixed use office-hotel-retail center led to the expansion of 1418 Walnut Street’s retail space into Bellevue Court, eliminating the street and creating one contiguous row of development–something this part of the block had not seen in nearly a century. The offices above were also restored and brought back into service.

The new, two-story addition, designed by RTKL Associates, was constructed  specifically for the Philadelphia location of Tiffany’s & Co. It seamlessly blended into Horace Trumbauer’s street level design, adding a grand entrance where the two structures meet with and was embellished with the iconic Atlas Clock that adorns most Tiffany’s & C0. locations. The jewelry store continues to occupy the 12,400 sq ft retail space and the Bellevue Court Building appears nearly brand new, as if it never fell into vacancy and disrepair.