Blazing A Trail To Venice Island With Waterways 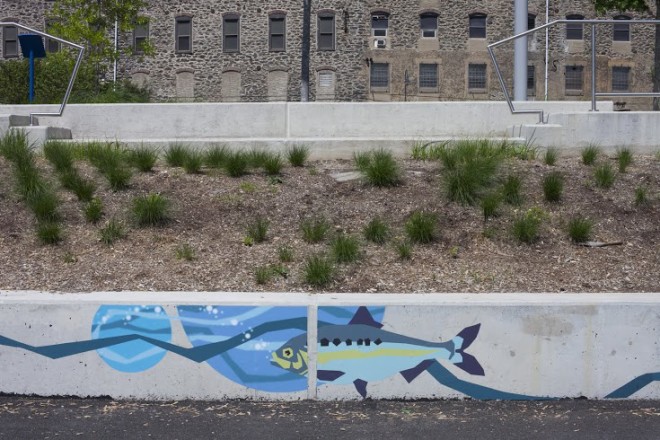 This Philadelphia shad is one of 50 vinyl prints that mark a path to Venice Island in Manayunk | Photo: Dan Papa

The accessibility, conservation, and treatment of water are issues we should all pay close attention to. That’s the message of “Waterways,” an ambitious public art project commissioned by the Philadelphia Water Department in collaboration with the Mural Arts Program. The artist Eurhi Jones designed more than 50 temporary vinyl prints installed across 10 city blocks in Manayunk. Jone’s project is meant to draw attention to the impact of polluted runoff on Philadelphia’s streams and rivers and at the same time the environmental benefit of the Venice Island Performing Arts and Recreation Center, with its storm and runoff controls and rain garden. “A lot of people really respond to art in a way that they don’t respond to technology, engineering and science,” said Tiffany Ledesma, of the Philadelphia Water Department. “It really allows us to elevate our platform and communicate in a whole new way, to a different audience. For us, this is a really exciting time.”

Kate Jacobi, of Mural Arts, is managing the project; the Bucks County firm Sign and Design fabricated and installed the art. 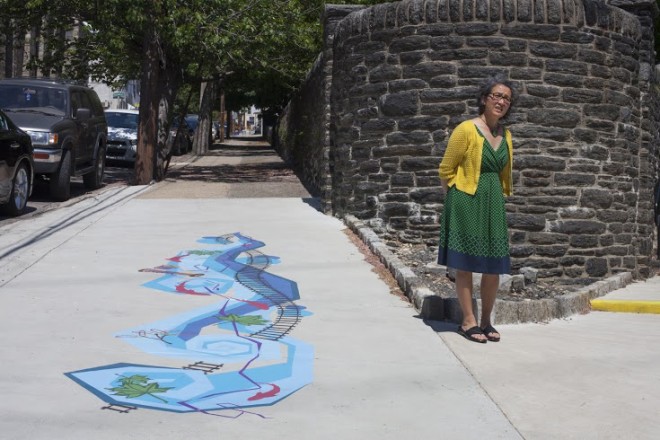 Eurhi Jones lives near Manayunk, and she spoke on her relationship to the landscape. “My family and I spend a lot of time wandering around the woods and the creeks of the Wissahickon, so when it came to thinking about what this work should be about, I immediately thought of the natural history element,” she said. Jones described the conceptual starting place of the installation as Pretzel Park, slightly uphill from Venice Island, where a large piece depicts railroad infrastructure, invoking the industrial and residential history of Manayunk.

The Pretzel Park starting point is literal, but also symbolic. When PWD surveyed 113 residents at Pretzel Park, only 11 of them new about the new arts and recreation center at Venice Island. Project leaders believe that “Waterways” will draw people down into Venice Island and discover the new community resources there.

“It’s about ensuring that we’re connecting the community that lives and works here to the river and to Venice Island,” said Ledesma. “It was really critical that we start here in the community.” 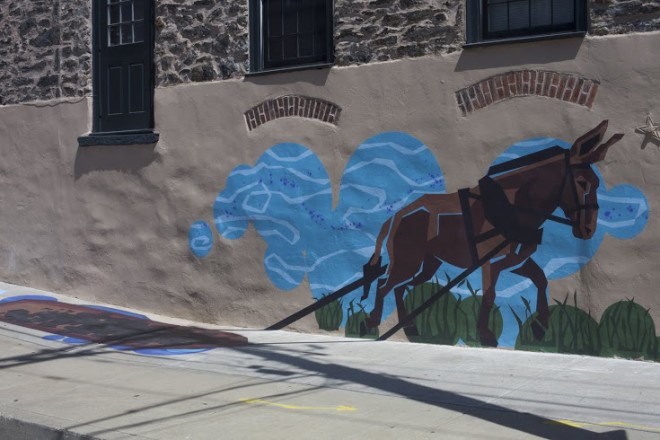 The art moves downhill, as water would, onto Main Street. Along the way, wildlife such as native shad are depicted, once plentiful in the region. Also featured are herons, crayfish and turtles, specifically a turtle design from Lenni-Lenape tradition (In the Lenape language, Manayunk means “the place to drink.”) A Lenape dugout canoe is also depicted on one of Jones’ pieces. Spools and gears are integrated into some of the designs, representing the history of large textile mill operations in Manayunk.

As one approaches Venice Island, the largest art piece can be seen–a mule pulling a barge. The animal is placed on the brick wall and the barge on the sidewalk. It creates a playful and impressive visual effect that reflects the industrial original use of the canal, which fell out of use once the railroads arrived. 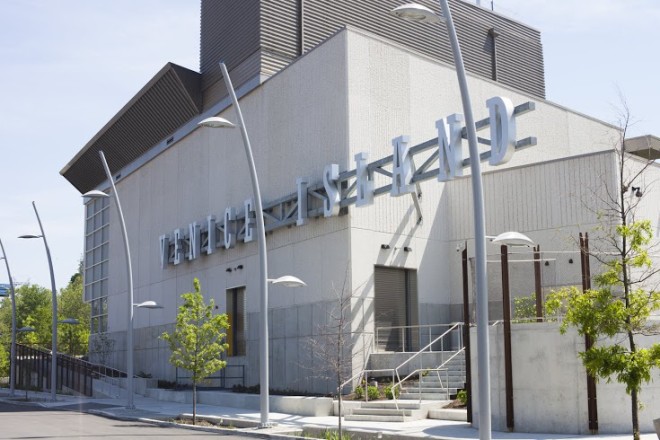 The new facilities at Venice Island include a performing arts building, a pump house with green roof, basketball courts, stormwater planters and an outdoor amphitheater. The major hidden piece of infrastructure is a massive underground storage basin that can hold four million gallons of untreated storm water. The polluted water is then removed and treated, preventing it from entering into the waterways.

The outdoor amphitheater and recreation area has been impressively fashioned with many of Jones’ designs depicting more native species and the ideal clean water conditions that the underground basin will help to create. PWD will install new signage with QR codes for the public to learn more about green infrastructure. Similar signs will be placed around the city at schools, recreation centers, and the zoo. No other public utility in the country is doing as much with art and technology to engage and educate citizens about greening initiatives. 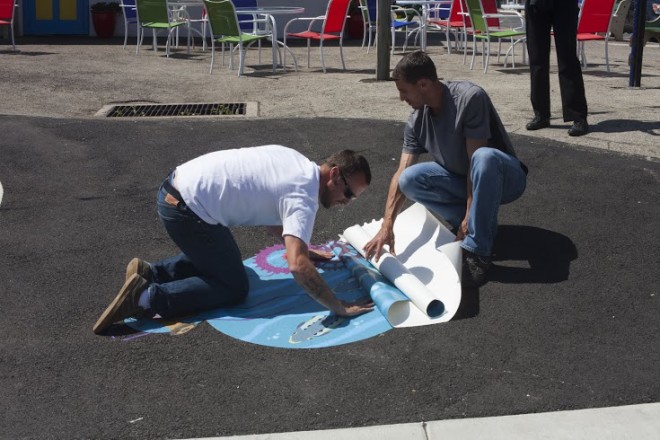 The art project and new facilities at Venice Island indicate a shift in Philadelphia’s treatment of public space and the environment. Hopefully residents will push for similar initiatives across the city, as many riverfront areas are in the process of being redeveloped for public use.

The creators of “Waterways” encourage the public to use the hashtag #phillywaterart when photographing their favorite piece of art.

For more information about PWD’s environmental stewardship, check out their Watersheds website HERE.