Unedited North Philadelphia is back tomorrow, Saturday, April 11, with an all-day screening and panel discussion, “From Reel Footage to Real People,” at the Wagner Free Institute of Science. Archival programming includes historic footage of the surrounding neighborhood, including Martin Luther King Jr. at Baptist Temple, Richard Nixon’s visit to Progress Plaza, highlights of the Uptown Theater, the Columbia Avenue Riots, the ascent and end of the legendary Blue Horizon boxing arena, and, just recently added to the program, “Finding Northadelphia”–a video produced by Youth Empowerment Services in 2010 that explores the history and development of North Philadelphia through conversations with community members and residents.

“The footage screened will reflect the mixed nature of footage in the collection as it will be a mixture of both raw and packaged news pieces and documentaries,” says John Pettit, assistant archivist at Temple University Libraries’ Special Collections Research Center and the program’s co-curator. “Some of the presentation is clustered geographically within the Columbia Avenue and the North Broad Street corridors. Hopefully people can get a sense of some of the evolution of these spaces and multiplicity of uses over time. An example will be the juxtaposition of a 1947 parade of Temple students with a 1970s Black Panther convention that both occupied the same block of Broad Street.”

Pettit says Saturday’s programming is a partnership with the Wagner, which wanted to narrow the focus of the event to the immediate neighborhood. Adding “Finding Northadelphia” to the screening will lend a voice to the community, something a few found lacking in the last screening.

“When we did the screening back in November [Unedited North Philadelphia: Girard to Lehigh] we only had footage from Temple’s Urban Archives, which contains mostly local media clippings,” says Cara Scharf, programs and communications manager of the Wagner Free Institute of Science. “Some felt that the media footage came from a certain bias and was not telling the full story of the neighborhood. We wanted to address that by adding some more footage to the program that represented the community’s voice.” 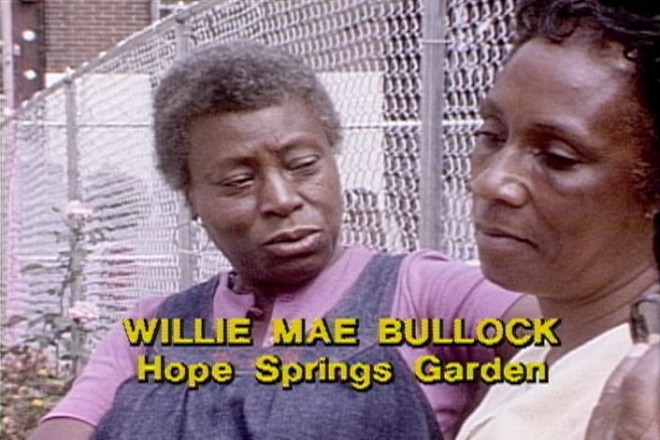 Scharf says that highlighting threatened neighborhood landmarks was also a consideration with the screening’s curatorial choices, nominally with footage of the Uptown Theater and the Blue Horizon, the exterior of which was recently placed on the Philadelphia Historic Register, but iconic interior arena was not.

“Highlighting these spaces fits into the overall ‘mission’ of the event, which is to preserve the legacy of the neighborhood and foster appreciation for all that has happened here,” says Scharf. “These buildings represent the culture and history of the area, which tends to be overlooked by the rest of the city. The fact that these buildings are threatened is indicative of how the area is changing and it’s important that, in the midst of this change, people are able to recognize what the neighborhood is to them and fight to ensure that the past is not forgotten with new development.”

A slideshow of John Mosley’s portraits of the community from the 1930s through the 1960s, collected from the Temple University Libraries’ Charles Blockson Afro-American Collection, will also be shown.

A panel discussion will be held post-screening where impressions and expertise will be shared. Philadelphia Public History Truck founder Erin Bernard will moderate the discussion. The panel will include Temple archivist John Pettit, Beech Companies president Kenneth Scott, who will speak on the neighborhood’s commercial and economic development, Karen Warrington, neighborhood advocate and communications director for Congressman Robert Brady, and Scribe Video Center founder and director Louis Massiah, who will touch on capturing the stories of communities with video.

“We expect that the discussion will be a mix of people telling their own stories, people asking questions about what in the footage still exists today and why or why not, and people discussing the current and future state of the neighborhood, which may touch on issues of gentrification and change,” says Scharf. “My hope is that it can be a chance not only to reflect on the history of a neighborhood that is not well understood today by many who don’t live here, and a forum for the community to express their feelings about what is happening to the neighborhood today and perhaps create shared understanding and respect between long-time residents and new residents, as well as residents of other neighborhoods.”

Following the panel discussion Bernard invites program attendees to share personal stories and neighborhood artifacts with the Philadelphia Public History Truck, which she will include in her exhibit, “They Say They Gonna Build,” opening on June 5th at 2152 N. Broad Street.

Programming for “Unedited North Philadelphia: From Reel Footage to Real Stories” will take place on Saturday, April 11th from noon-4:30PM. The Wagner Free Institute of Science is located at 1700 West Montgomery Avenue.