The Other Side Of The Tracks: A Tale Of Two Trestles 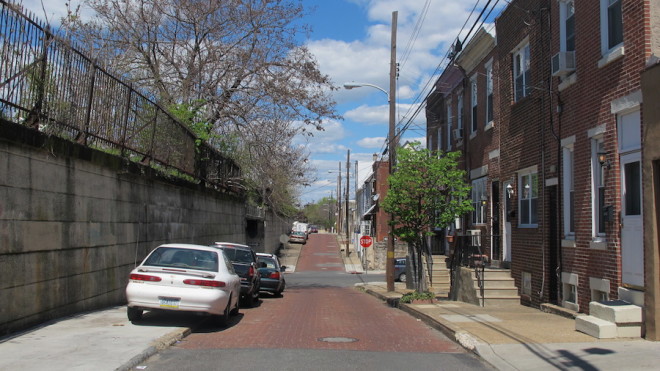 The use of the idiom “the other side of the tracks” to designate a socially distinct area from the observer’s own, is as old as the first American railways. Considering that Philadelphia is the home to some of America’s oldest rail corridors, it should come as no surprise that our city abounds with train-bearing barriers, dividing our city by class, race, and worldview.

The Business of Boundaries

Gentrification is a relatively recent addition to the complex tangle of race and class in Philadelphia, but there is no ignoring its rapidly accelerating pace. It can both modify and magnify preexisting divisions, dissolving old neighborhood definitions while creating new ones. Rail corridors, by delineating the ultimate geographic extent of a gentrifying neighborhood, can offer the sharpest, most distinct transition between a redeveloping neighborhood, and one that remains unaffected. Houses on one side can increase in value tremendously, while houses on the other stagnate. The point of this article is to suggest that this division is not just an intangible idea, but one that can be captured, and statistically analyzed in two neighborhoods, West Philadelphia’s Cedar Park, and the ambiguously-named transition zone between Fishtown, Port Richmond, and Kensington, known to the local civic association as Olde Richmond and as Port Fishington to other less meticulous residents.

The two neighborhoods differ greatly in terms of aesthetics and sociocultural background, with the former a liberal, progressive, multicultural bastion, and the latter a dense, traditionally working-class neighborhood of almost wholly white Catholics. Yet they both share the unique trait of having their outer geographic limits defined by large, imposing rail corridors. The development of these corridors reflected and influenced the neighborhood’s histories in a way that still very much affects them today. 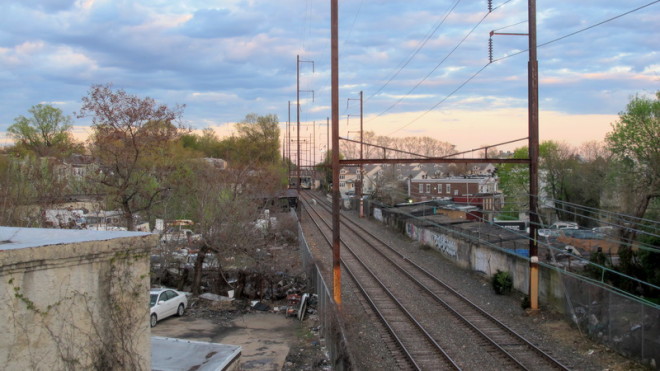 Serving as one of the boundaries between West and Southwest Philadelphia, SEPTA’s Media-Elwyn Regional Rail tracks split from the Northeast Corridor just south of Woodland Cemetery, running diagonally northwest to a point just south of Baltimore Avenue, after which the tracks parallel the avenue on its way beyond the city limits. While cutting northwest, the tracks separate Cedar Park and the more southerly Squirrel Hill from Kingsessing Avenue, creating one of the city’s starkest divisions of race and class. The tracks themselves date back to 1853, and the neighborhoods around them were simultaneously developed as archetypical streetcar suburbs at the turn of the last century, but as institutions and social capital continue to flow into the side closer to University City’s core, the contrast has only been getting stronger. 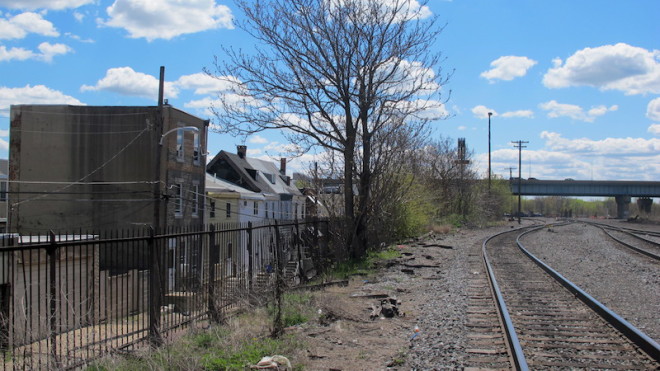 Running in between Lehigh and Somerset Avenues, from the Delaware River across North Philadelphia to the Schuylkill River and the coal fields beyond, the Lehigh Viaduct was once the world’s most active coal transport line. At its peak in the 1870s, 2.25 million tons per year of anthracite were loaded onto ships at the Reading Railroad’s Port Richmond Terminal. As the waterfront infrastructure and the industry it served collapsed, the viaduct was reduced to one active freight line that still runs today, though the viaduct’s most active use today is as a refuge for drug users, seeking an isolated refuge inaccessible to both police and hostile peers.

Unlike Cedar Park, the surrounding neighborhoods were uniformly working-class since their development, though over time, the more inland areas suffered greater job losses and thus more blight than riverside Fishtown and Port Richmond. The proliferation of artists, musicians, restaurants, and new residential development over the past decade in Fishtown has created another differentiation, between an increasingly economically vibrant west side, and the more inert development of neighborhoods to the east of the trestle.

In both neighborhoods, the tracks are crossed by multiple streets, visible in the areal images below. 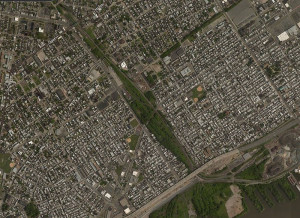 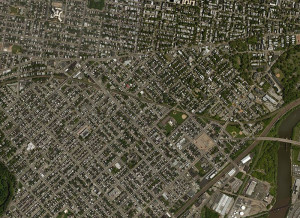 For this analysis, we narrowed focus specifically on the crossing streets that extend below or above the train tracks, since they offer the most direct comparison between conditions on either side of the tracks. We collected two blocks worth of house sale prices, on either side of the tracks, a total of four blocks for each of these streets, and for both of the aforementioned timeframes.

Both graphics show that apart from a few exceptions, discussed below, there is a favored side to each trestle, with streets on the more high-status side seeing significantly higher appreciations in house price. In both cases, the favored side is the one closer to the core of Center City, confirming the idea that the two trestles serve as the outer boundaries of a wave of gentrification that is spreading from our downtown core in all directions. The following tables represent the years between 2005-2015. Research was conducted using the City of Philadelphia’s Office of Property Assessment database. 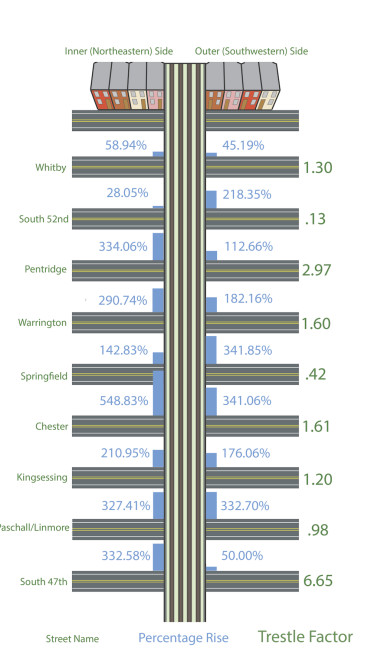 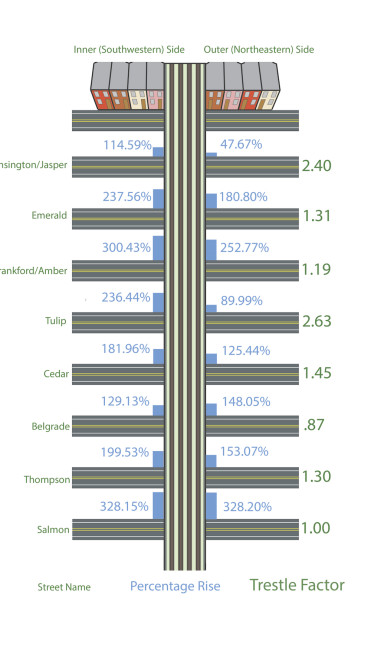 Next, we analyzed the specifics of each side’s appreciation in price. High-profile developments, differences in housing stock, and widely-reported misdeeds explained much of the fluctuation from street to street; we detail them below.

West Philadelphia–The lack of differentiation on Linmore and Paschall Streets most likely has to with the relative isolation of the houses on either side of the tracks. With dead ends on several of the streets and Linmore Street’s one-way traffic flow facing away from Woodland Avenue, the inner side to the north and east of the train tracks has not capitalized on its fortuitous placement.

Conversely, on 47th Street, the difference in price appreciation is vast, but this is no doubt influenced by the much greater square footage of the twins to the north of the tracks, compared to the single-family rowhomes to the south.

The rare inverse relationship on Springfield Avenue, where the outer side of the tracks has seen a greater appreciation, may have to do with the historic stability of the inner side. The presence of the vital St. Francis de Sales Church and school at 47th Street and Springfield Avenue has no doubt anchored the surrounding neighborhood. As a result, the house sale prices on the eastern side of Springfield have never been as low as on other streets, so the appreciation of their prices, proportionally, has been lower.

Pentridge Street, just south of Baltimore Avenue, attracted a creative developer who recently converted an empty lot into a contemporary live-work industrial space, shared by, among others, a guitarmaker and a therapist. Such a high-profile development on the right side of this otherwise quiet and unassuming street has no doubt contributed to the very steep differential between the two sides of the tracks.

The inverse relationship on 52nd Street makes slightly more sense when one considers the massive physical presence of the Apple Storage facility on the northern side of the tracks, which throws surrounding row house blocks into shadow by early afternoon. There have been redevelopment plans for the facility for some time, but they have stalled from neighbors’ concerns over parking and tax abatements, which has frozen price appreciation on the neighboring stretch of 52nd Street. The lack of large industrial parcels in West Philadelphia somewhat hampers large-scale development, but small-scale community improvement projects such as Farm 51 have now been in progress for several years. 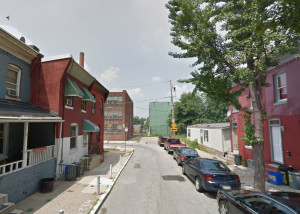 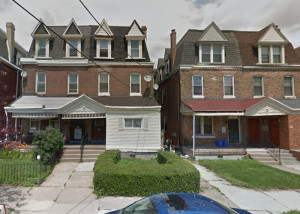 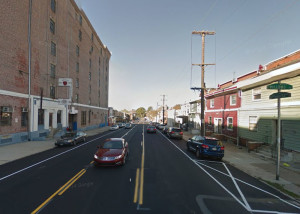 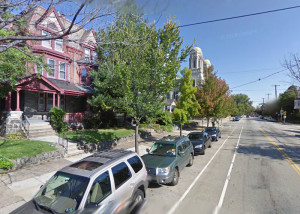 Port Richmond also has relatively few empty parcels awaiting or recently having completed development, with one notable exception on Belgrade Street, a large house just past the trestle, which may explain the price inversion found here.

As one continues on to Cedar and Tulip Streets, the disparity between the two sides begins to grow. Readers familiar with the area will recall Robert N. Coyle’s real estate scam, “Landvest.” In a textbook case of blockbusting, Coyle let his properties decay to the detriment of both tenants and neighbors. The scheme’s efforts were focused north of the trestle, in any area already perceived as overlooked compared to the core of Port Richmond, and thus properties there barely increased in value. Meanwhile, just a few blocks away on the south side of the trestle, a new development on Cedar Street is being praised for its sleek architectural aesthetic.

Into Kensington, the area closest to the El, Jasper Street’s southern side is home to Little Berlin, an art collective that has been finding innovative uses for both its interior and exterior spaces since 2010. Their efforts have been so noteworthy that its outdoor garden and performance space has now been slated for development by Viking Mill owner David Hirsh in a move that may prove disappointing to the renter artists, but highly lucrative for the landlord. Meanwhile, just a few blocks away, the further stretches of Jasper Street lie a stone’s throw from Somerset Station’s open-air drug market.

Belgradenew is the new construction on Livingston Street | Google Maps

Whether the outer sides of these trestles continue to languish will depend on the combination of high-profile development and low-profile buzz that have characterized the inner sides. The NKCDC’s Orinoka Mills project is scheduled to transform an abandoned factory teetering over the city’s most high-profile drug corner into a mixed-use headquarters for one of the city’s most active CDCs, while on the other end of the Lehigh Viaduct, PennDot’s restructuring of Interstate 95 will reconfigure and brighten the formerly visually unappealing Richmond Street crossing.

The relationship between house prices and a neighborhood’s quality of life can be misleading. Displacement of long-term residents and the rapid change of a neighborhood’s reputation, profile, and even boundaries is destabilizing. It would be ideal if affordability kept up with improvement, and yet even the humblest neighborhood improvement efforts are often inseparable from gentrification, even if that is as far as possible from the improvers’ attempts. More deliberate efforts to change a neighborhood, whether in the form of new housing, businesses, or festivals, can offer opportunities to both new and old neighborhood residents, though as this study shows, these are too often limited to specific parts of the city. The benefits of living on the right side of the tracks are numerous, though it would most preferable if there was no “right side” at all.