In Strawberry Mansion, Making The Case For Adaptive Reuse 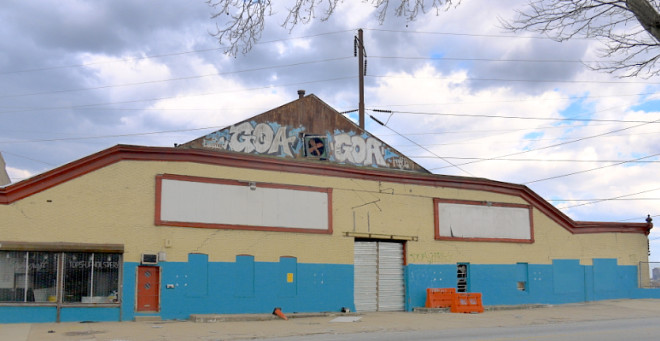 When I give family, friends, and colleagues a tour of the city, we always drive by the mansion sites of East Fairmont Park. Rolling toward North 33rd Street the excursion slows down to point out the poorly maintained, but impressive Hatfield Mansion. Once across the old Pennsylvania Railroad right-of-way I never forget to point out the former Metropolitan Garage–one of the most interesting utilitarian oddities in Philadelphia.

The large, one-story brick warehouse, with its truly bazar parapet and roof configuration, hovers in its triangular lot at 1501-05 North 33rd Street, just northwest of where Amtrak separates Brewerytown and Strawberry Mansion. Overlooking both the railroad tracks and an incredible view of the city, the building features a vast façade of brick, amicably interrupted by stucco and glass at street level and a vehicle entrance. The garage is topped off with an unusual camel-back parapet and an over-built balloon roof. For most of its life, this 100-year old beast has been used for parking and servicing vehicles, a function that ended just after the last century. In 2013, ML Builders of Huntington Valley purchased the building for $150,000 with plans to demolish it. 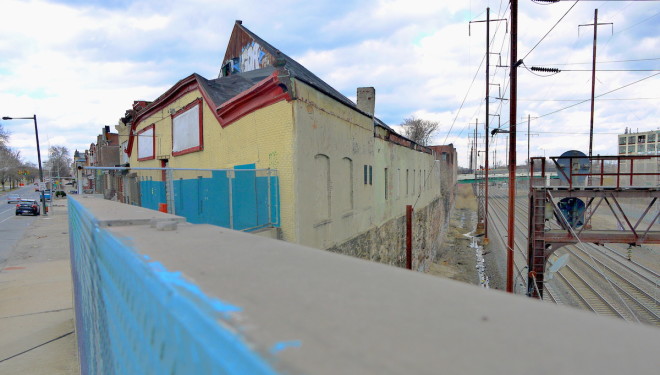 “Cities have to grow and change,” says Ian Smith, of Ian Smith Design Group, when I asked him why razing the building was the only plan on the table. Smith filed a demolition permit application in 2013 on behalf of ML Builders. 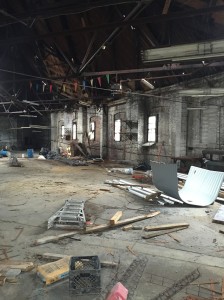 In September 2014, L&I issued permits for new construction of a five-floor mixed-use building with balconies on every level but the commercial first floor. The Metropolitan Garage parcel is one of few in the area zoned for high density and mixed-use. Late last year, City Council unwisely approved steep downzoning of much of North Philadelphia from higher density multi-family to single-family residential. Smith said it was too early in the project to specify if the residential component of the project would be rental or owner-occupied. He couldn’t speculate on the size of proposed units or their cost.

The decision to build on the old garage’s lot likely has to do with the excellent view. Both the perception and reality of crime here matter, but the neighborhood bursts with beauty and architectural potential. A long block southeast of the newly restored SEPTA Bus Station at 33rd and Ridge there is a large, ornate vacant apartment building and vacant row houses, both large and small–many unique and impressive. The John Coltrane house is nearby along with plentiful vacant lots awaiting reinvestment.

A Matter of Significance?

“We fully researched the history of the building and it’s nothing important,” Smith says. Perhaps that’s true, on the face of it. In fall 1913, two publications—the Iron Age and Motor World Wholesale–announced that William Stellway, then proprietor of a Metropolitan Garage at 57th and Chestnut Streets, would open another garage at 33rd and Jefferson Streets (this is where Jefferson Street would be if it crossed the railroad line). The plans included a one-story garage, measuring 140 by 180 feet—a much wider version of the similar period building shown above. Guided by the precise strictures of the 8,700 square foot lot, the triangular building originally featured 16,402 square feet of interior space with electric lights, steam heat, and concrete floors, all of which sat beneath a large, ballooning wooden roof supported by light steel trusses. This large garage was designed to hold up to 65 cars. By July 1914, the garage was advertised as a Goodyear Service Station. 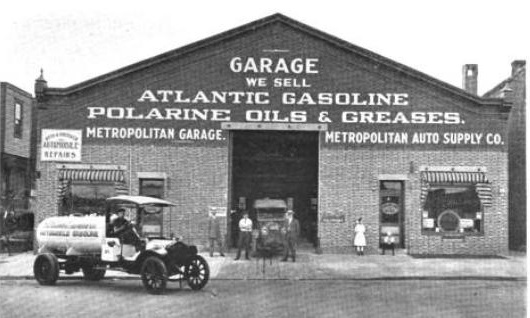 A similar, but smaller version of the 100-year-old Metropolitan Garage at 1501 N. 33rd Street—once a chain of service garages and auto suppliers that had a national presence in the 1910s | World Motor Wholesale Magazine, 1916

The Metropolitan Garage offered all manner of services, from auto-maintenance, cleaning, parking, and even some sales. While much of the park-side streetscape along N. 33rd Street was devoted to large three-story row houses and impressive apartment houses, there were several auto-related business in the immediate vicinity. A contemporary of the Metropolitan Garage, the Fiat Motor Company Garage and Service Station, was located northwest across Natrona Street—an impressive, and extant, small garage. A car dealership constructed in the 1920s in a what was then a vacant lot roughly eight houses northwest of the garage is another interesting old building taking up its entire lot between N. 33rd and Natrona Streets.

While the prospect of new construction in Strawberry Mansion is exciting, not all development is good development. The notion that struggling neighborhoods like this one should accept anything often leads to poor-quality buildings. So why not hold off on this one–on a precious commercially-zoned lot–until developers have rehabbed some of the existing vacant housing stock? “An industrial building is really inappropriate across from a park, and in a neighborhood of homes,” says Smith. But this isn’t an industrial building. Rather, it’s a funny 100-year-old artifact of the automobile age, full of the kind of character this city is fast losing. Reuse it boldly and you might get something rolling.