Getting Wise To Watershed Waste With One Man’s Trash 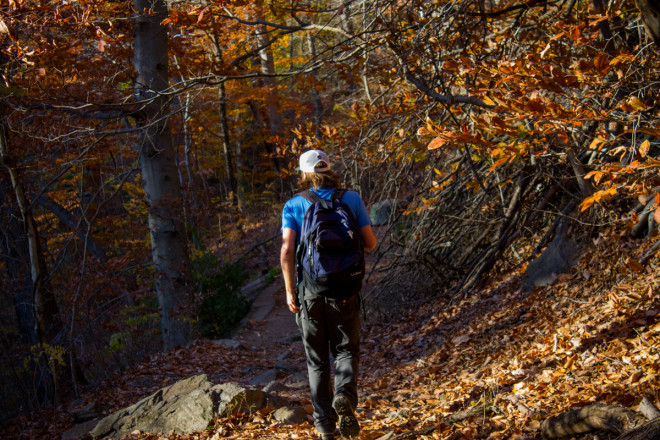 Down in the valley with Bradley Maule | Photo: Michael Bixler

Editors Note: Taking a hike in the Wissahickon Valley with Hidden City co-editor Bradley Maule is as peaceful as it is educational. Over the course of 52 consecutive weeks, Maule collected, sorted, and documented 3,786 individual pieces of litter–149 glass bottles, 22 socks, 3 pregnancy tests, etc. During this period he himself has transformed into a walking encyclopedia of the park’s trail system, topography, geological landmarks, and crumbling industrial past. With One Man’s Trash–part environmental art installation, part human behavioral study horror show–Maule hopes to raise awareness of just how much litter ends up inside the park and within the city’s watersheds. His collection goes on haunting (and often hilarious) display inside the Interpretive Center at Fairmount Water Works today, April 21st–Earth Day–with an opening reception at 6pm.

Hidden City co-editor Michael Bixler got in touch with colleague Bradley Maule to talk some trash.

Michael Bixler: Tell me a little bit about re-discovering the Wissahickon. You moved to Mt. Airy specifically to be closer to the park, right?

Bradley Maule: I did move to Mt Airy to be close to the park. Starting with my days in Fishtown and the role Penn Treaty Park played in my life while living there, I recognized a greater importance for nature in my life. Especially after living in Oregon, where there is an abundance of lush greenery, I knew when I came back to Philly I needed lots of trees and topography.

MB: What was the defining moment when you decided to turn your clean up hikes into an environmental art project?

BM: I don’t know that there was a defining moment per se, but I did know from the beginning I wanted to sort and keep everything with the goal of making a big presentation of it all. 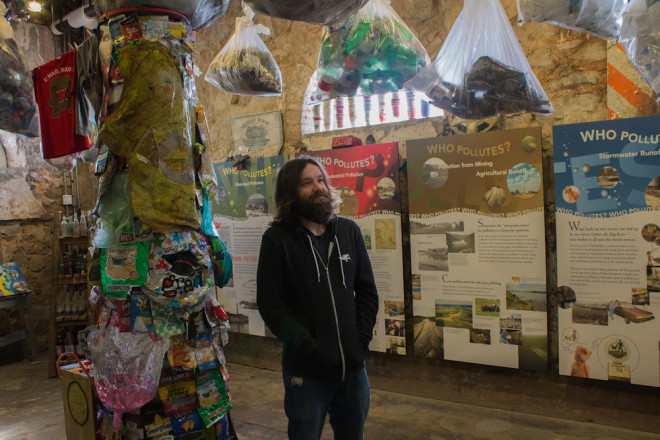 MB: 52 weeks in sunshine and brutal, inclement weather is a stiff commitment. Was there any point when you asked yourself, “What in the Hell am I doing?”

MB: Tell me a little about your process for mapping the trails? How is the map you’ve charted different than, say, the trail guide that is already available?

BM: Well, it’s pretty similar—they’re the same trails and streams and streets, after all. My scale is slightly larger, though—I go out just a little farther into the surrounding areas for a little broader context, and I’ve added some details like watershed boundaries and stream names, as I think those are important. By the same token, the official Friends of the Wissahickon map has helpful topographic contours that I wasn’t about to attempt in pen. 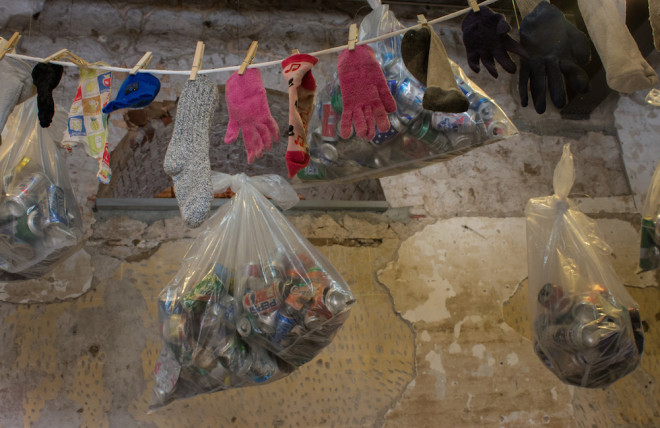 MB: You’ve mentioned trouble spots in the park where litter and traffic turns the surrounding area into a dumping site. What are the top 5 dirtiest spots and why do these areas attract folks?

5 – The upper end of Houston Meadow where it abuts the Andorra neighborhood. I picture this as a place where Roxborough and Andorra kids go after their prom.

4 – Rex Avenue Trail where the White Trail crosses. This has always been a popular party spot.

3 – Under the Henry Avenue and Walnut Lane Bridges. These are also popular party spots, but the amount of trash thrown from passing cars, especially along Walnut Lane, is impressive.

2 – Ridge Avenue entrance. This location is the main entrance to the park for anyone arriving by bicycle from Center City, Fairmount Park, and Manayunk. It’s also a SEPTA transit center with 11 buses coming and going in both directions. On top of not having any notable trash receptacles, the small adjacent barbecue joint has two dumpsters that people frequently use to dump their own trash.

1 – Devil’s Pool. Far and away the most littered spot in the entire Wissahickon, it’s also the most beautiful and geologically significant, which of course heightens the trouble caused by its abuse. 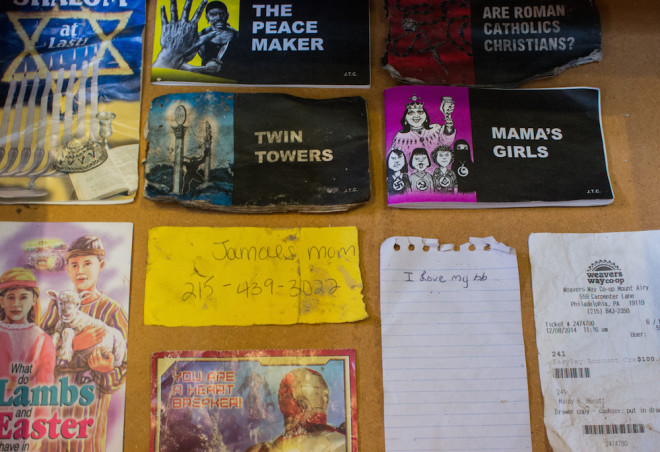 MB: Ultimately who is at fault for the litter and what do you think they could do better in litter prevention? Is it a shortage of investment or simply a lack of oversight due to limited resources?

BM: I hate to think of it in terms of blame, but honestly, I see it as a cultural thing. When parents are changing their babies’ diapers and leaving the dirty ones behind in the woods, they’re literally starting these kids’ lives with an idea that it’s okay to do this. And when you think of what they’re doing—leaving behind plastic that barely decomposes, full of human feces in a place that people come to for its natural beauty–it’s beyond frustrating. I think this degradation started when Frank Rizzo dissolved the Fairmount Park Guard in the early 1970s.

MB: What is the biggest thing the park needs right now?

BM: To be clear, the Wissahickon is well cared for relative to most of the parks in Philadelphia. Friends of the Wissahickon have been incredible stewards of the land for over 90 years. And they know better than anyone just how much abuse it suffers. For me, I think the biggest thing the Wissahickon could use is enforcement at Devil’s Pool. It’s technically against the law to go swimming there, but to me, that’s not the problem. The trash left behind, obviously, is the biggest problem, with graffiti and the trampling of vegetation right behind it. I hear a lot of calls for more trash cans in the park, something I whole heartedly disagree with. Putting new trash receptacles deep in the park only encourages people to leave their trash there, and they require constant attention from people (usually volunteers) who need to empty them. It is really very easy to take your trash, which will always be lighter than it was when you brought it into the park, out with you. There are usually trash cans at the parking areas. 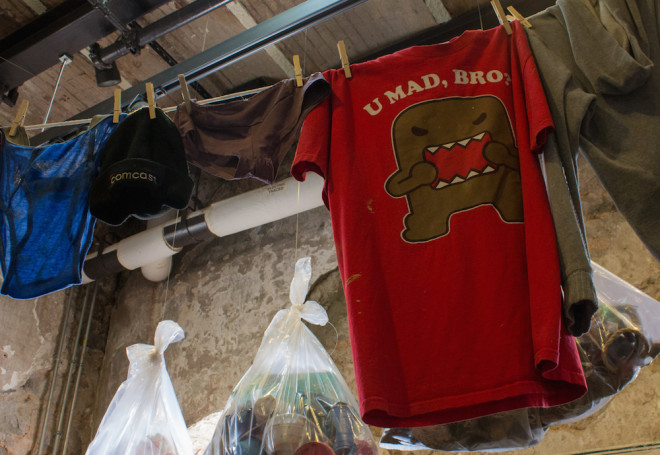 MB: The trails around Valley Green and Devil’s Pool are indeed extremely popular. It’s like an amusement park during the summer and somewhat unbearable. What are some good spots for peace and quiet during the warmer months?

BM: At the break of dawn, those same areas are full of peace and quiet. I also really dig getting into lesser-used parts of the park like the upper end of the Cresheim Valley and the East Falls section of the park on the east side of Lincoln Drive.

One Man’s Trash will be on display inside the Fairmount Water Works Interpretive Center until June 26th. The center is open Tuesdays through Saturdays from 10AM until 5PM and on Sundays from 1PM until 5PM. You can help clean up the Wissahickon Creek this Saturday, April 25. Information HERE.