For Whom The Bells Toll: The People Vs. Saint Mark’s Episcopal 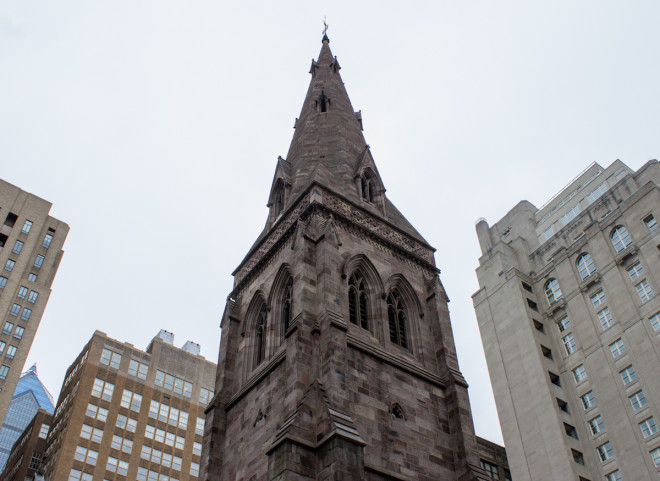 Residents of the Ayer Condominium at 7th and Walnut are already airing grievances about the newly-installed LED sign on top of the Lit Brothers building. Allan Stein recently told the Inquirer, “You can’t imagine how it destroys any sense of relaxation of being at home, with having this constant projected light.”  Fears are also stirring among condo owners that the offensive illumination will depreciate the value of their home and that the light from the sign detracts from the historical temperament of Washington Square.

The emerging conflict mirrors a number of similar environmental nuisance disputes in the city throughout the years, none more contentious than the great Saint Mark’s Episcopal Church bell controversy of the late 1870s.

Founded in 1847, Saint Mark’s Episcopal Church was built by John Notman on the 1600 block of Locust Street. Saint Mark’s was specifically established to reflect the theology of the Oxford Movement within the Church of England to reclaim its Catholic heritage. Its architecture is in the Decorated Gothic style commonly used in England in the late 13th and early 14th centuries. The church is recognized as one of the best examples of this Gothic Revival style in America. The first public service was held there in October, 1849.

The steeple of Saint Mark’s was completed by 1852. About 25 years later, the parish raised money to install four bells, ordered from London’s Whitechapel Bell foundry—the same iron works that cast the Liberty Bell in 1752. Saint Mark’s bells were mounted in 1876, followed by four additional smaller bells two years later. To accommodate the new bells, a timber structure was built higher within the tower at the base of the spire. The four larger bells were then remounted in this new bell frame.

By the 1870s, wealthy Philadelphians were building large houses in the neighborhood surrounding the church. Many were as tall as the steeple–the bells were almost as high as the upper floors of the residential dwellings. When the bells rang they reverberated between the houses and the church, thus amplifying their sound. The noise did not resonate favorably with the neighbors.

Foreseeing a conflict in the making, a letter signed by 21 neighbors living in the vicinity of Rittenhouse Square was submitted to the church before the first four bells were even installed. The neighbors requested that plans for hanging the bells not go forward, alleging that the ringing would have adverse effects on the nervous systems of young children, the elderly, and the ailing. Neighbors also worried that the ringing could cause the church tower and spire to collapse.

Fears were initially driven by what the bell ringing would do to residential property values. The neighborhood was inhabited by wealthy businessmen and professionals of Rittenhouse Square who were accustomed to getting their way. Though, the vestry and congregants of Saint Mark’s were also used to having things their way. In response to the petition the church curtly explained that the bells had already been ordered and that plans to install them in the church tower remained unchanged. 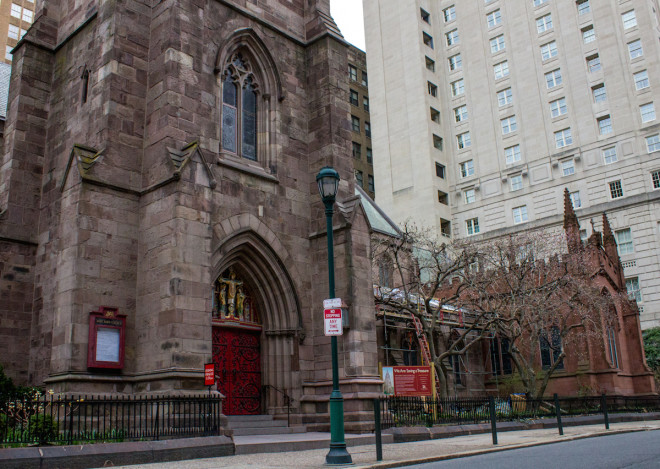 Saint Mark’s on Locust Street was a hotbed of unrest in 1876 | Photo: Michael Bixler

The next day, MacGregor J. Mitcheson, an attorney for the aggrieved neighbors and himself a nearby resident of Locust Street—and a pew-holder of Saint Mark’s—wrote to the church, complaining that the bells had violently startled people from their sleep. He also claimed that the noise had caused violent headaches. Mitcheson’s primary objection was the 7AM ringing. The church remained unfazed.

The matter then escalated. In late October, the son of George L. Harrison, one of the aggravated neighbors, called on the rector of Saint Mark’s to cease the 7AM chimes as they were taking a terrible toll on his father’s nervous condition. He said that even the expectation of the bells ringing was keeping his father awake all night. Mr. Harrison’s physician, Dr. S. Weir Mitchell, who was also a popular author of the time, wrote to the Saint Mark’s vestry to report that some of his patients were being driven mad by the early morning bells. The church rector directed the early ringing to be discontinued after reading the doctor’s letter.

Soon thereafter, a formal petition was signed by 48 neighbors and presented to the vestry asking that the daily round of bell ringing be discontinued entirely with the exception of a single service. A companion letter signed by 14 local physicians calling for an end to the ringing, citing the sweeping, adverse effects on public health was also submitted. In response, Saint Mark’s agreed to consider any special appeal that was made for stopping the bell ringing in specific medical cases, but remained unwavering in their right to regulate the ringing of their own bells.

Frustrations further escalated and a circular was printed and distributed by the neighbors, attacking Saint Mark’s for allegedly ignoring the pleas of doctors on behalf of their patients. The feud quickly made the newspapers, and a bill for injunction was filed with the Philadelphia Court of Common Pleas on January 2, 1877. Depositions were taken from residents near the church, as well as medical and scientific experts, real estate experts, and theological professors.

Just about all of Philadelphia became embroiled in the case. Dr. Mitchell submitted an affidavit with his opinion on the bells, as did famous Philadelphia doctors Samuel D. Gross and David Hayes Agnew (of Thomas Eakins’ The Gross Clinic and The Agnew Clinic fame). Well-known architects Samuel Sloan and Addison Hutton also submitted statements. Real estate experts offered testimony generally regarding the value of homes in the vicinity of a church with bells, and professional bell ringers supplied testimony as well. 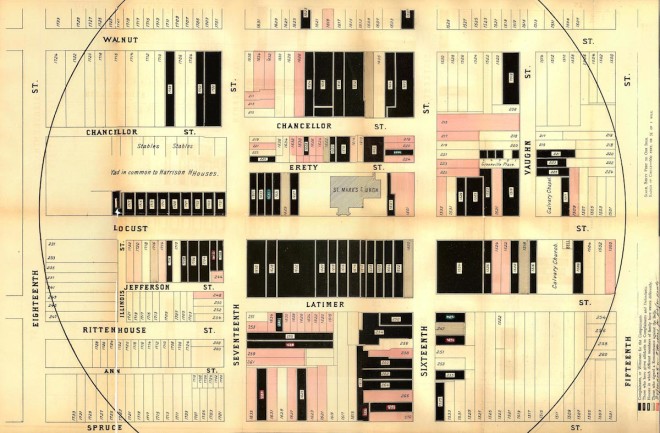 A color-coded map of the area surrounding Saint Mark’s showing the distance and height of buildings from the church| Source: Harrison et al. vs. the Rector, Church-Wardens and Vestry of St. Marks Church, Court of Common Pleas, No. 2 of Philadelphia County, December Term, 1876

All of the documentation was gathered into a volume nearly 500 pages, longwindedly titled, Report of Harrison et al. vs. St. Mark’s Church, Philadelphia: A Bill to Restrain the Ringing of Bells So as to Cause a Nuisance to the Occupants of the Dwellings in the Immediate Vicinity of the Church (1877). The book included a color-coded map of the area surrounding the church and showed the location of complaining residences relative to the church. At least one other volume of the Complainant’s Affidavits was produced, which contained a ground plan of buildings in the vicinity of Saint Mark’s and the height of the surrounding buildings. A wooden scale model of the neighborhood was also introduced during the proceedings.

Attorney MacGregor Mitcheson and several other prominent Philadelphia lawyers litigated the case. William Henry Rawle was the lead lawyer for the complainants, and George W. Biddle defended the church. A frequently-raised point was that the bell ringing was not part of the church’s religious service and that Saint Mark’s had done without any bells at all for over 20 years.

The judge ultimately issued an silencing order against the church. Not to be deterred, Saint Mark’s immediately appealed to the Supreme Court of the Commonwealth of Pennsylvania, which affirmed the lower court’s decree, but modified it to allow the bells to be rung on Sundays for two minutes, half an hour before the beginning of worship and the smallest bell to be rung alone for five minutes before. The ringing was limited to three divine services on Sunday and did not include early morning services. In 1878, a modification was made to permit the bells to also be rung on certain holidays and for weddings and funerals.

A Tune Up In The Bell Tower

In recent times, Saint Mark’s has once again become known for its bells. The church has developed one of the most active change-ringing programs in the United States since restoring the tower bells in 2000. 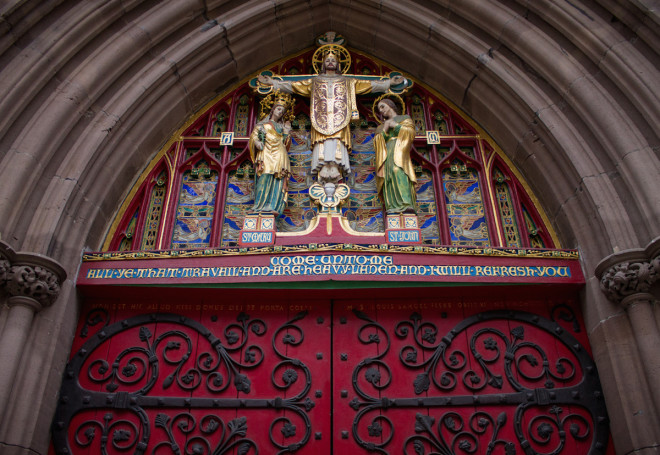 Change ringing–the method of ringing a set of tuned bells in a series of mathematical patterns called “changes”–differs from other forms of bell ringing that make no attempt to produce a conventional melody. With change-ringing, bells are made to follow one another in order–each ringing once before the first rings again–striking the bells in precise orders that are mapped out using rows of numbers. No bell moves more than one place in each row at a time. Ringing like this creates specific rhythms and patterns of sound. Under the manner in which Saint Marks’ bells are hung, the bells may be swung back and forth so that the clappers strike the swinging bells, but they may not be rung full circle according to the ancient English manner. Interestingly, when the bells of St. Mark’s Church were restored for change ringing, they were rehung in an enclosed chamber of the tower where the sound can be completely muffled for practice.

Today the bells of Saint Mark’s are rung by members of the Philadelphia Guild of Change Ringers, who provide the ringing of Saint Mark’s Episcopal on Locust Street and the Church of Saint Martin-in-the-Fields in Chestnut Hill–the two bell towers in Philadelphia equipped for English change-ringing. There are about forty such church towers in all of North America. World-wide there are some 5,500 towers, mostly found in England. Ringers regularly visit Saint Mark’s from around the globe to ring the Philadelphia bells in the traditional English manner.