Circling Back To The Ross Loopholes 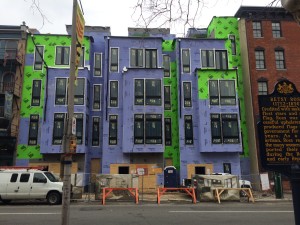 Maybe it’s fitting that Betsy Ross was a seamstress, an occupation that eventually made her blind, for the Ross Luxury Townhomes, going up across the street from her house, made it through some rather wide loopholes. The first was zoning. The site is zoned for commercial mixed uses (CMX-3), a designation meant to encourage commercial activity, density, and street-level vitality. It also allows single family houses. And north of Market Street private street-front garages haven’t been banned, as they (nominally) have south of Market into Queen Village and Bella Vista. So if you could have a single family house in CMX-3 at Third and Arch Streets, you could have one–or three of them–with private, street-facing garages. Even on a 300 year old retail street across from a legendary historic site.

The Zoning Board of Adjustment couldn’t do anything about this, either (I initially reported this incorrectly in my earlier article). The ZBA adjudicates requests to violate the zoning code. In this case, the developers of the houses, Lee Kaplan and Bob Miller, proposed less open space than was allowed; the ZBA rejected this request. The developers adjusted their plan to fit code, and the ZBA never heard from them again.

Deputy mayor of economic development Alan Greenberger told me he was incensed about the project when he learned it would have private garages and curb cuts. When the CMX-3 category was created, he said, no one imagined it would be used for single family houses. He is prepared to ask City Council to close that loophole by removing single family housing from the category.

But there were other loopholes. 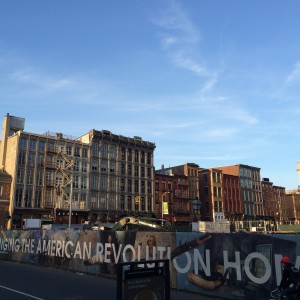 The parcel, near Third and Arch, is in the Old City Historic District. The Historical Commission has a statutory role on any development in a City-designated historic district. It can reject inappropriate adaptive reuse of existing buildings and it can offer guidance about new construction on parcels that have been vacant for a long time. The Historical Commission ruled on October 11, 2013 that “the buildings should be completely redesigned.” The residential scale and the garage fronts were in violation of the Secretary of the Interior’s historic preservation standards (the basic guideline for the preservation field). But since this parcel had been “undeveloped,” the Historical Commission’s ruling was non-binding; the developers were free to ignore it.

While the Historical Commission voted unanimously to reject the garage-front plan, it didn’t have the power to stop it and it wasn’t backed by a clear neighborhood voice on the issue. This is because the once-feared Old City Civic Association, the group that had–for better or worse–aggressively managed the look and scale of the neighborhood, had dissolved several months before.

The fact is that garage-front houses and curb cuts, as I and others have reported before at length, have eaten up blocks of our strongest and most viable neighborhoods, ultimately limiting the impact of growth by undermining the very urban experience, undercutting transit, and sacrificing public good for private gain (a two-for-one loss of public parking spaces). In Fairmount, Bella Vista, Queen Village, and Fishtown, garage doors near transit hubs predominate.

But most of this is hidden to most of us. The Ross luxury garages will be there every time you bring your aunt Mabel to the Betsy Ross House to learn about early needlework. You’ll look across the street and see a great big loophole, and some kind of expensive car inching through it, (hopefully) trying to avoid the pedestrians just trying to get to Starbucks, on the corner.