A Slim And Sturdy Survivor On Race Street 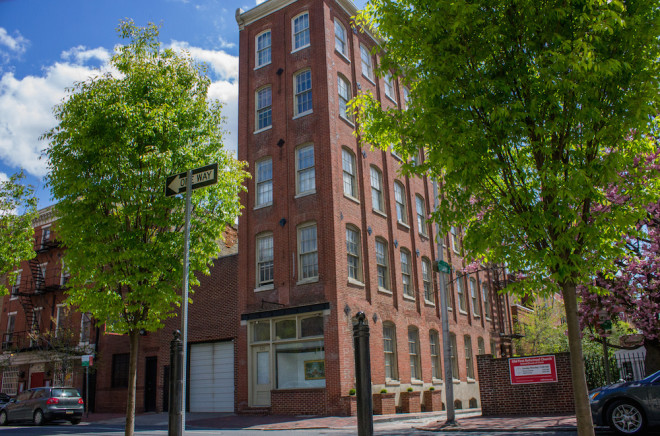 The distinctly thin five story building on the corner of Race & N. Orianna Streets is only 16 feet wide and 55 feet tall. The trim structure has housed an array of industrial tenants over the last century, including Saxe Paper Company, whose sign can still be seen on the exterior. Now a well groomed, repurposed condominium complex, 320 Race Street has weathered the neighborhood’s many dramatic shifts and suffered a number of failed conversion plans to get to where it is today.

Various druggists occupied the four story row house-turned-warehouse on the corner going as far back as 1854. The final tenants of that earlier building, Eisner & Mendelson and Elim Graff, were shameless snake oil salesmen who constantly avoided both the law and angry, unsatisfied customers. Eisner & Mendelson used fake testimonials made by real doctors in their advertising, and Elim Graff regularly sold “medicinal” concoctions that were laced with cocaine. 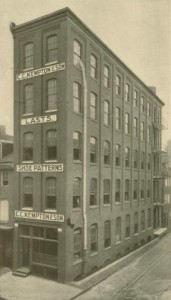 As C.C. Kempton & Sons in 1898 | Source: Philadelphia Pennsylvania, The Book of Its Bourse & Co-operating Bodies via the Athenaeum of Philadelphia

In the second half of the 19th Century, heavy industry came to Old City. Even the First German Reformed Church (still standing) was converted into a paint warehouse by John Lucas Inc. Some trinities and the first incarnation of the Mikveh Israel Cemetery, located on North Orianna Street (originally Sterling’s Alley and later Hillsdale Street), gave way to cigar box factories and lumber mills. The Eisner & Mendelson and Elim Graff building was demolished and replaced by the slender, present building in the 1890s, though the architect, builder, and its original developer all remain unknown.

A Revolving Door of Manufacturers

The building’s first major occupant, C. Carroll Kempton & Son, came along in 1897 and primarily manufactured lasts–cast iron forms in the shape of a human foot used to manufacture shoes. They also made brass and zinc shoe patterns. The company emblazoned almost every floor of 320 Race Street’s façade with its name and the items they made. C.C. Kempton & Son were highly successful in their field and outgrew the thin building by 1913. Within the next year the company commissioned the firm William Steele & Sons to design a modern re-enforced concrete factory for the company at Vine & Randolph Streets, which was eventually demolished to make way for an Interstate 676 ramp.

In 1916, Jacob Rosenfeld’s Sobo Cigar Company moved into the building from its former location–a converted row house–at 411 Arch Street. The fledgling firm, only three years old at the time, had become successful enough to make complete, head-to-toe renovation of the five story building, converting it for cigar-making purposes. The company stayed a scant five years before moving on to even bigger quarters, eventually being absorbed by the Regina Cigar Company. 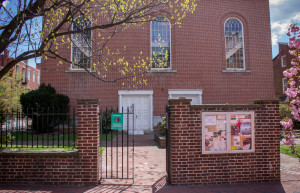 Old First Reformed United Church of Christ, once reused as a paint warehouse, was founded by German immigrants in 1727 | Photo: Michael Bixler

In 1921, Nathaniel Saxe purchased the building for $14,500 and completed another major alteration to the interior to accommodate his paper company. The Saxe Paper Company made napkins, paper bags, tissues, and toilet paper at 320 Race Street for almost four decades. On January 10th, 1941, a two-alarm fire consumed the entire building and wiped out the entire stock of the Saxe Company. Afterward, Saxe had the entire building overhauled–much of the flooring, most of the windows, all the plaster on the walls, and the roof were replaced. A surviving Saxe Paper Company ghost sign still adorns the building’s façade at street level facing Orianna Street.

Nathaniel Saxe sold the building in 1960. Local developer Milton Calesnick later acquired it. He installed his Cal-Vet Laboratories food additive business. The ground floor was used for wholesale heating, ventilating, and air-conditioning equipment sales–one of many such businesses from Old City’s days as a wholesale goods district.

The Long Road To Reuse

In the mid 1960s, the neighborhood began to change. The creation of Independence Mall and the investment of federal and state funds in Society Hill lead to a focus on historic preservation. The First German Reformed Church, now called Old First Reformed United Church of Christ, was restored. Developers bought industrial buildings and turned them into loft apartments. In the late 1970s, 320 Race was worn, vacant, and often covered in scaffolding. 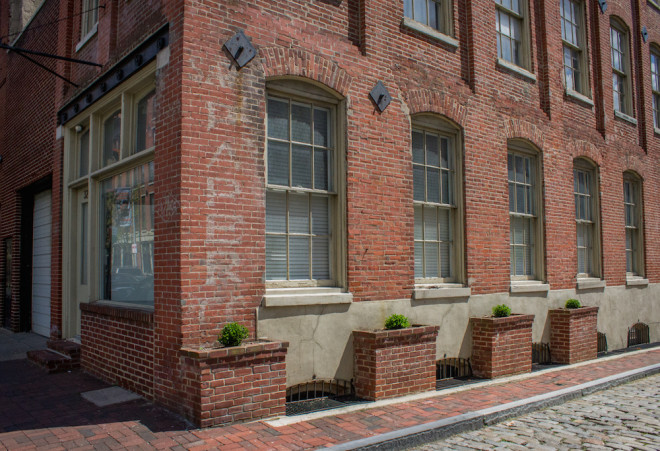 The now dilapidated building’s long rows of west-facing windows and the interior’s beautiful brick and wood details made it an obvious choice for residential conversion. In 1983, local businessman A.E. Wolf initiated a first attempt to convert the building to residential use, under the designs of architect Robert Rosen. After two years of negotiation, Zoning Board of Adjustment approved the plan and changed the building’s official use to residential. However, the project stalled. In 1992, developer David Mermelstein took control of the building and proposed the building’s conversion into a 23-room hotel. This plan died, too. In 1998 new owner Jeffrey Casnoff succeeded in completing the conversion of 320 Race Street into five apartments and 1,800 square feet of retail space under the designs of local architect Ollie Cherniavsky.

Today, an art gallery occupies the retail space; a 915 square foot condo goes for $339,900. The façade was cleaned and re-enforced with pointing squares in 2007, though the Saxe Paper Company ghost sign can still be seen.