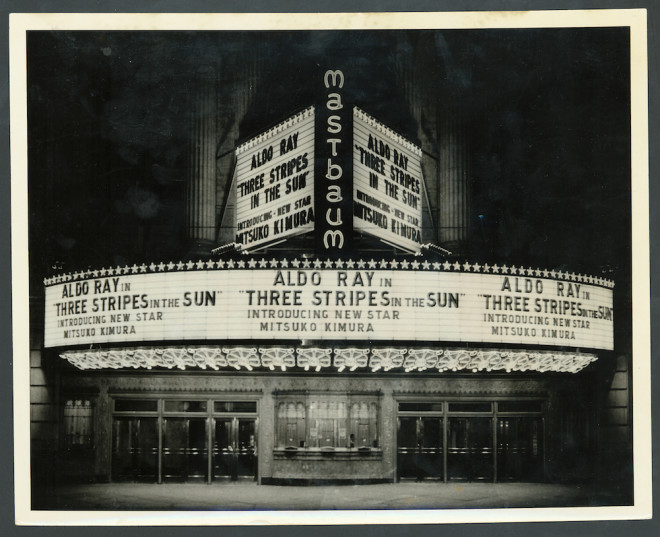 The brilliant marquee of Mastbaum Theater in 1955 | Courtesy of the Glazer Collection, Athenaeum of Philadelphia

From an early 1900s movie palace and vaudeville house to a mixed-use downtown office complex: the northwest corner of 20th and Market is the first subject of a new feature, Then And Now. Built in 1929, the sumptuous Mastbaum Theater featured five magnificent lobbies filled with statuary and murals. Despite bringing in some of the greatest performers of the 20th century, the Mastbaum couldn’t survive the cultural shifts of the post-War period. Television changed habits and Urban Renewal put this section of downtown into transition. The theater was demolished in 1958. For a two decades the northwest corner of 20th and Market sat vacant; later it was used as a parking lot. In 1988, 30 years following the demolition of the grand theater, real estate developer Maguire Thomas and multinational corporation IBM opened the first of a twin tower complex aimed at change the city’s skyline: One and Two Commerce Square. 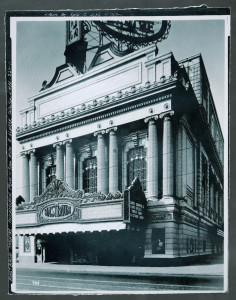 Greek Revival and then some: The Mastbaum movie palace | Courtesy of the Glazer Collection, Athenaeum of Philadelphia

In 1916, brothers Jules and Stanley Mastbaum purchased the Regent Theater of Philadelphia. Their joint venture, Mastbaums’ Motion Picture Company of America, was later renamed the Central Market Street Company. Jules restructured the company after Stanley’s death in 1918, renaming the business the Stanley Company of America. In 1919, the company was worth $15,000,000 and operated 34 theaters in the region. In May 1926, an $80 million merger added 225 theaters and the Stanley Company of America quickly became the largest theater chain in the United States, owning and operating motion picture theaters throughout Pennsylvania, New Jersey, and Delaware. The theater company’s crown jewel at 20th and Market was to be named the Jules Theater. But Jules died before construction and Warner Brothers took over the company. To commemorate the former owner, Warner Bros. hired Philadelphia theater architects Hoffman-Hernon to build the Mastbaum Memorial Theater in Jules’ honor. With over 4,700 seats in its massive auditorium, the Mastbaum was the biggest theater in Philadelphia and the 8th largest movie palace in the country.

Hoffman-Hernon were masters of sumptuous design. (Their only surviving downtown Philadelphia movie palace is the Boyd, though it is uncertain if the interior architecture of the Boyd is still in tact.) The architects enlivened the Mastbaum with leaded glass windows, statues, paintings, and lavish interior design–all to a cost of $5.5 million. Czechoslovakian crystal chandeliers hung in the five vast sequential lobbies. The auditorium featured three balconies, a Wurlitzer organ, and was home to the largest chandelier in the city. On February 28, 1929, the theater’s opening gala featured the world premiere of Warner Brothers’ Sonny Boy with a large orchestra and ballet accompaniment. (The majority of performances featured a full orchestra accompanying the production.)Dean Martin, Judy Garland, and Bing Crosby would all eventually perform there. 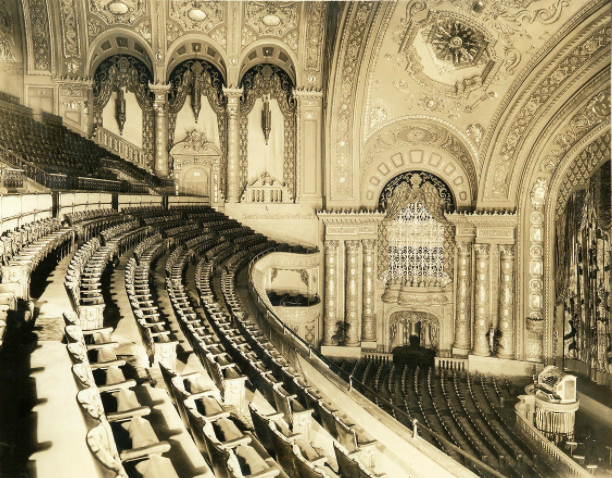 The Mastbaum’s auditorium featured cathedral-like embellishments and largest chandelier in the city | Courtesy of the Glazer Collection, Athenaeum of Philadelphia

The opening was cursed, of course, by its timing. The theater was expensive to run and difficult to fill during the Depression, despite movies’ popularity as an affordable diversion. The Mastbaum was full on many nights, but this was never enough to make a profit. After multiple attempts at remain in operation and financially soluble, the Mastbaum was forced to close its doors in 1934. 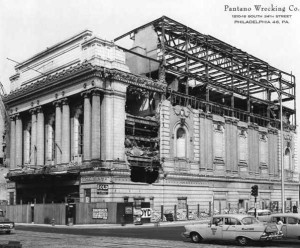 After the economy began to recover, the movie palace reopened in 1942 with the film Tales of Manhattan. Mastbaum hosted dozens of premiers during the 1940s, including Pride of the Marines in 1945.

But television was coming, taking down the city’s grand movie houses with it. The demolition of Mastbaum’s movie palace coincided with the federal “urban renewal” program, which Philadelphia leveraged perhaps to a greater extent than any other city. West Market Street, now opened up by the removal of the Pennsylvania Railroad’s Chinese Wall, would provide a way for the city’s office core to expand, though the process took 30 years. The corner where Mastbaum once stood was empty for two decades; only in the late 1970s was it converted into a parking lot. 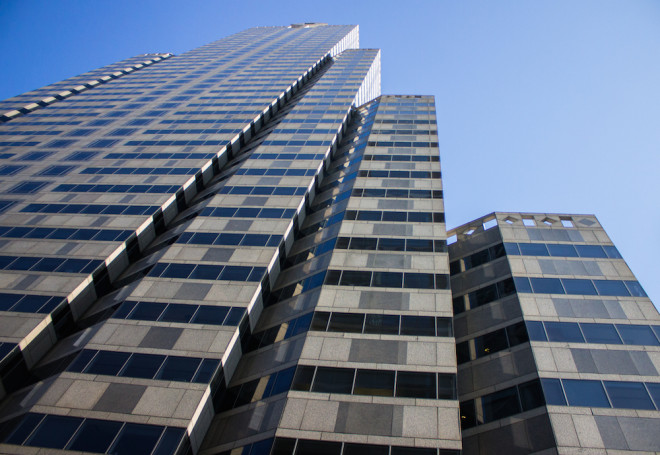 In 1985, thirty years after the demolition of the Mastbaum Theater, Maguire Thomas Partners and IBM opened One Commerce Square in what was becoming the financial district of Philadelphia. Designed by I.M. Pei & Partners, One Commerce Square—built as the first of the two skyscrapers—was home to the American multinational technology corporation, IBM, which leased over half of the property for the company’s mid-Atlantic headquarters. Two Commerce Square was not built until a lead tenant was secured for the building in 1990. Consolidated Rail Corporation–or CONRAIL–signed on to make the skyscraper its main headquarters. The building was completed in 1992 at the height of Philadelphia’s long recession. 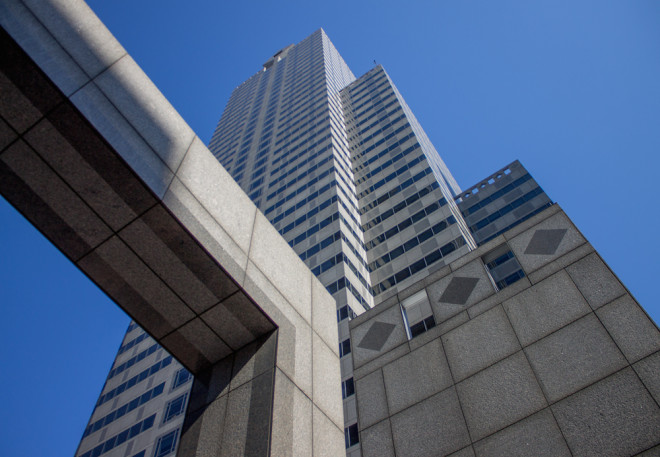 The granite-clad, Post-Modern towers contain 1,850,000 square feet of office space, retail around a central courtyard, and a 625 car parking garage. Oversized diamonds brace the rooflines of both towers. Floor plans are generous, influenced by IBM’s preferences for ample elbow room in the 1980s. The 30,000 square foot courtyard was designed by the firm Hanna/Olin, now OLIN (Hanna/Olin and I.M. Pei were frequent collaborators). The focal point of the center of the courtyard is a large, pink granite fountain. According to the Philadelphia Business Journal, Philadelphia’s City Planning Commission–influenced by Commerce Square’s plaza–instated a new building code to govern open space. 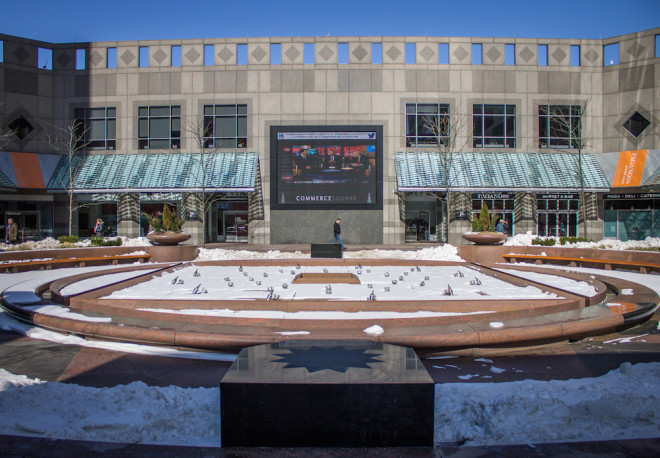 Within a few years, most of One and Two Commerce Square’s original tenants moved out of Philadelphia and smaller firms, including The Pew Charitable Trusts, Ernst & Young LLP, Pennsylvania Lumbermens Mutual Insurance, moved in, with a smaller IBM and CONRAIL presence remaining in the buildings. The Courtyard at Commerce Square features a ground-level retail and a restaurant, and boast a “dancing” fountain equipped with an LED light system. Today, an embedded digital “Media Wall” graces the open space courtyard with streaming news broadcasts and sports events.

The author would like to thank the The Athenaeum of Philadelphia for their excellent digital archive, Philadelphia Architects and Buildings, and the website Cinema Treasures for being an indispensable resource for theater research.