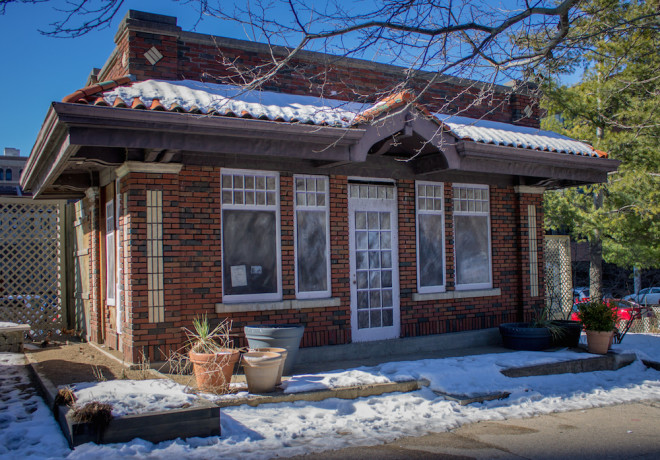 The “Avis Lot” at the southwest corner of 20th and Arch Street is a prime example of the many spiritless, underutilized properties in Center City West. However, the tiny Gulf Oil station on the lot’s 20th Street side–where the former service station has held its ground for 85 years–is a prize result of the parcel’s lack of development. The vacant, Mission Revival structure still has its original colorful flair, though the it is easy to pass by without being noticed.

At the start of the 1920s, the area northwest of the old “Chinese Wall”/Filbert Street Viaduct was eyed by developers for a new wholesale district for the city. Its proximity to the large Philadelphia & Reading Railway Freight Yard at 23rd and Arch made it ideal for interested entrepreneurs. One of the speculators was Jacob C. Kahn, an ambitious pawnbroker-turned-developer who had made a name for himself building auto sales and service stations along North Broad Street’s Automobile Row and elsewhere in the city. (One of Kahn’s sales rooms–occupied by Max Paul’s Toyota Certified Central City–still stands today at 48th and Chestnut Street). For a brief period, Kahn’s real estate company focused on urban office development, but it largely specialized in automobile-related development. 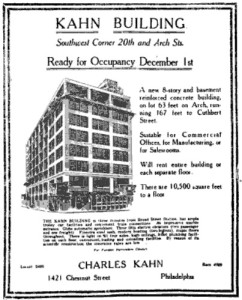 Ad for the Kahn Building while it was under construction | Source: Philadelphia Evening Ledger, October 31, 1921

In 1921, Kahn proposed a $250,000, 8-story re-inforced concrete office and loft building for the 68′ by 163′ foot space previously occupied by three large former row house-offices at the southwest corner of 20th and Arch Streets. He commissioned architect Leroy Berman Rothschild, who Kahn had previously worked with on the Biberman Building (now part of 600 North Broad), at 15th and Mt. Vernon Streets. Kahn hired his son Charles to manage the building and he named it for the family.

In January 1922, contractors finished the Kahn Bulding and Cluett, Peabody, and Company, a NYC-based manufacturer of shirt collars, moved in. However, the company didn’t stay there very long. About a year later, shirts with collars already attached had come into style and the company took the hit, forcing them to leave the Kahn Building. Next to move in was the brand new United States Veteran’s Bureau, established to care for the many World War I veterans that had re-entered the country over the previous few years. In 1923 the location became the Veteran’s Bureau’s District 3 Office and was the building’s headliner with its name installed on all sides of the façade. This organization was one of the many precursors of the current Veteran’s Administration, which came about in 1930. 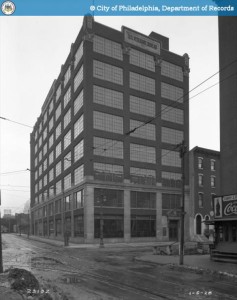 The Kahn Building as the U.S. Veteran’s Bureau, 1928 | Source: PhillyHistory.org

By 1929, Kahn had cultivated business relationships with large oil companies around the world and would assist many of them in building gas stations at major corner locations throughout the region. Over 200 of them, in fact. Charles Kahn identified the Kahn Building’s corner at 20th and Arch as an ideal location for a gas station. With the Veteran’s Bureau already planning to move out, only eight years after its completion, Kahn tore down his namesake building.

In October 1930, Kahn leased the lot to Gulf Oil, which put up the small building that still stands on the site today. Gulf Oil was a pioneer in gas station architecture and changed the look of the brand’s stations frequently over the years. During the approximated period of 1926-1932, Gulf often employed the Spanish/Mission Revival style. This was a departure from the “pagoda” style the company had used in the late teens and early 20s. This particular station was one of the rare variants of this period that did not have a long drive-through canopy attached.

The Kahn Family’s connection to automobiles and the development of suburbia lasted through the 20th Century. Today, the 100 year old company, based in Fort Washington and run by a fourth generation of Kahns, is a retail pad site and strip mall developer.

The Gulf station on 20th Street stayed in continuous use for the next three decades. The adjacent lot at 2006-2010 Arch Streets was paved for surface parking in 1939 and divided into the lots 2012 Arch Street in 1958 and 2014-18 Arch Street in 1962. That year, the City of Philadelphia considered using the parcels for a new fire station–this was first time the little Gulf Oil hut was threatened by demolition. The fire station plan never materialized and the Gulf station stayed in service. 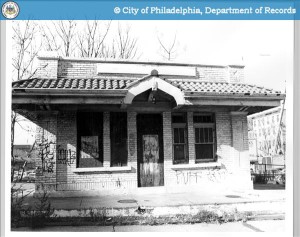 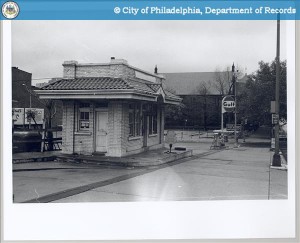 Still in use as a Gulf Station, 1970 | Source: PhillyHistory.org

In 1974, the little building was threatened again by a proposal for a 21-story, 245-room hotel to be designed by the firm Nowicki & Polillo. That development fell apart after being rejected by the Zoning Commission. The Gulf Station stood abandoned for seven years until becoming a hot dog stand in 1981, right around the time the building was added to the Philadelphia Register of Historic Places.

In 1984, the Linpro Company bought up the three lots, consolidated them, and cleared even more space at 2020-24 Arch to make room for a proposed 19-story office building under the designs of the architecture firm Curtis, Cox, and Kennerly. When the proposal failed, Linpro cut its losses by proposing that the lot be used temporarily as an “interim rental car agency.” By the end of 1986, the Zoning Board of Adjustment approved the plan with a number of restrictions and contingencies, one of which was to install attractive landscaping around the old Gulf hut. 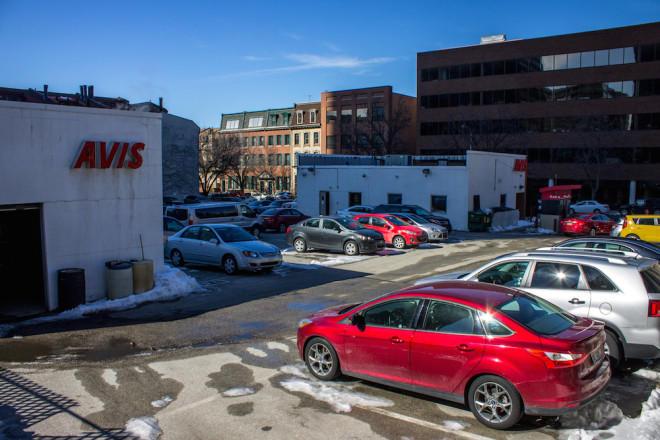 Twenty-nine years later, Avis still rents cars on this development-doomed parcel. Though, the curse of the lot may be broken soon. This last December, Parkway Corp bought the large 32,000 square foot property for $8.4 Million, no doubt to speculate on the Comcast’s expansion in the area.

If the diminutive Gulf Oil hut gets threatened with demolition once again, don’t fret. Nearly exact copies of it still stand in parts of the United States, including one in Algiers Point, Louisiana that still has its Gulf signage intact.