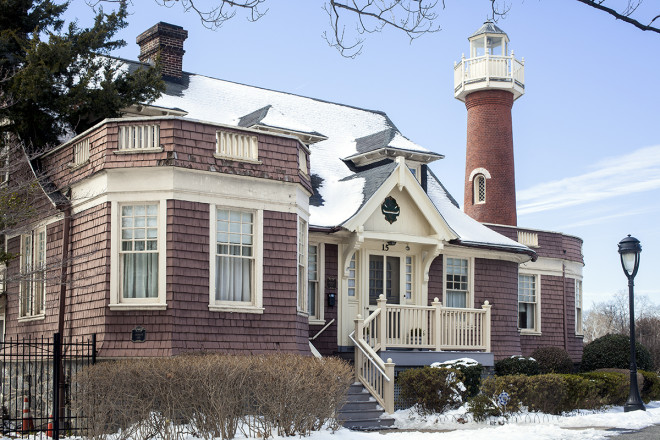 Turtle Rock Light was built in the late 1800’s to keep river traffic away from the banks of the Schuylkill River | Photo: Peter Woodall

One might think life on Boathouse Row would be serene, especially after dark, but the opposite is true, according to Sedgeley Club house manager Joseph Krajewski. “Before moving onto the row, I thought it would feel isolated, but there is almost always someone passing by,” he said. “The loudest days tend to be when the road is closed: bike race, marathon, Fourth of July. Even on quiet days, the prominence of Boathouse Row for rowing, running, cycling, roller blading, and walking keeps people coming by at all hours of the day and night. There is rarely a dull moment.”

Krajewski is responsible for upkeep of the 1903 boathouse and the 1887 Turtle Rock lighthouse, incorporated into the boathouse design, at 15 Kelly Drive on Boathouse Row.

The Sedgeley Club’s interior feels a bit like a time capsule, accented by gleaming antiques and creaking floors. Krajewski and Sedgeley members enjoy a striking backdrop of sky, stone, and river in different shades of slate through the windows lining three sides of the Club’s dining room where the lighthouse rises from the Colonial Revival structure. The Sedgeley is one of the oldest buildings on Boathouse Row, though the lighthouse itself was a freestanding structure for almost 16 years.

“The lighthouse supports a hexagonal lantern room surrounded by an octagonal walkway,” said Sedgeley member Deborah Firth, who explained to me that the light itself, originally powered by gas was electrified in 1990. At that time, workers repointed the lighthouse’s masonry and carpenters installed a new wooden balustrade and newel posts.

The interior is only wide enough to support one ladder so only one person at a time can climb to the top.

A combination of rowing and industrial interests led to the lighthouse’s construction. The lighthouse warns of the Schuylkill dam (and falls) just ahead and illuminates what was–and still is–a busy area for rowing, skating, and industrial transportation made possible by the dam created for the Fairmount Water Works in the early 19th century. The calm water drew rowers and skaters, who had to abandon the area once river, saturated with toxins, stopped freezing.

The Philadelphia Skating Club was formed in 1849 and the Schuylkill Navy in 1858. In 1860, City Councils passed an ordinance allowing both organizations to build a clubhouse and boathouses on the riverfront. The Boathouse Row we see today, lined with 10 buildings that together are recognized as a National Historic Landmark, is what remains of the structures approved for construction beginning in 1860.

The Schuylkill Navigation Company’s ships–a fleet that transported coal year-round from the mountains of Pennsylvania to Philadelphia–were also docked here. 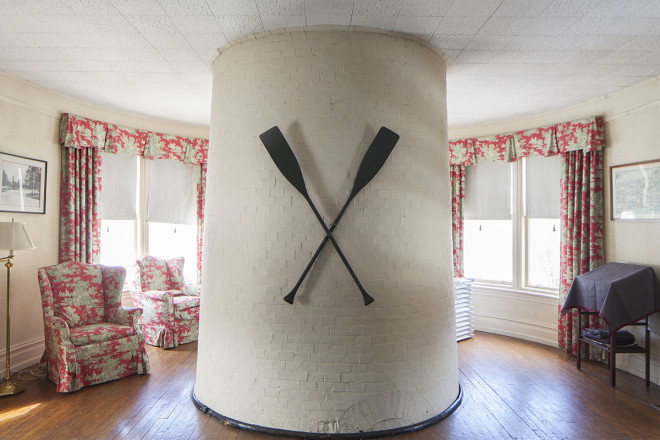 Turtle Rock lighthouse was put up by the builder Frank Thurwanger, who was also responsible for schools and public buildings. Thurwanger spent $2,663 on the lighthouse, which he completed on June 14th, 1887. The Sedgeley clubhouse–home to the first women’s club on Boathouse Row and the first all-women’s boat, canoe and bicycle club in the world–was annexed to the lighthouse in 1903.

The  Sedgeley clubhouse was the last house built on Boathouse Row. Margaret Longstreth Corlies, a Colonial Dame and a member of the Acorn Club, founded the athletic club in the mid-1880s with a group of women who enjoyed bicycling and canoeing along the river. After extensive planning, pressuring, fundraising, and patience, City officials eventually approved the plans to build a clubhouse in what was then an all-male Boathouse Row. “When the doors to the boat house officially opened in 1903,” said Firth, “it was front page news!”

Before the Sedgeley Club’s headquarters was built, the athletic club rented space in the warmer months from the Philadelphia Skating Club at 14 Boathouse Row. It was an arrangement that worked well for several years, but by 1902, with 200 active members and a well-established schedule of activities in place, the Sedgeley Club needed its own space. Park commissioners caved to the determined efforts of Corlies and her group of women and soon plans were underway to build 15 Boathouse Row. Arthur H. Brioche was hired as the architect.

On December 26th, 1902, everyone involved in the launch of Sedgeley participated in the laying of the clubhouse’s cornerstone. Members organized a ceremony where each members paraded toward the site carrying a paddle or flag to mark the occasion.

The clubhouse opened in May 21st, 1903, and soon attracted more members, becoming a popular, festive place known for parties, ping pong, piano music, dinners, and luncheons. Founder Corlies continued serving in leadership roles with the organization until she moved to Boston in 1938. The club has maintained a steady membership of over 300 women ever since. 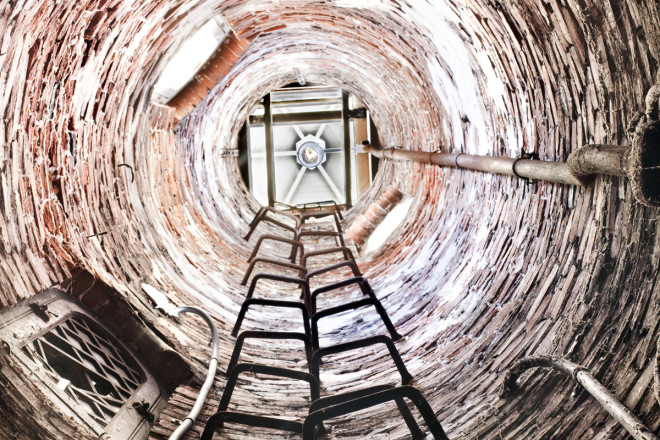 Looking up toward the lighthouse beacon | Photo: Peter Woodall

Club notes and guest books kept throughout the club’s 113 years reveal talk of tea and jam, the purchase of new boats and curtains, commemorative cake at the 75th anniversary of the laying of the club’s cornerstone, and Colonial costumes and cuisine during the 1976 Bicentennial. One note from 1980 records the day the City turned on the lights that outline each of the boathouses, including Sedgeley.

Carey Cheyney, president of The Sedgeley Club, says the building is active year-round with game nights, happy hours, fundraisers, educational programs, and book signings. Each year the club hosts two formal dinners. Cheyney found her way to Sedgeley by way of the lighthouse soon after moving to Philadelphia. After she drove by one day and discovered the history of the building she decided to get involved. Cheyney has been a member for five years, serving as president for the past two years. “I love Philadelphia so to be a part of this place and the community here on Boathouse Row means a great deal,” she said.

Maintaining the clubhouse has its challenges. “It’s a very needy building,” said Carey. Long-term resident managers with personal connections to both the club and the community along Boathouse Row have each played a pivotal role in keeping the building in impeccable shape for over a century. Krajewski, a 25-year-old rower who trained with Penn AC and Vesper rowing clubs, is the current resident manager of Sedgeley. He is responsible for cutting grass, raking leaves, planting flowers, doing small repairs, and leading occasional tours for prospective renters. “Probably my most important role is making sure things do not go wrong,” said Krajewski. “The biggest threat to houses on Boathouse Row is not robbery, though there are opportunistic thieves who scout up and down the Row. I think the biggest threats are the unseen circumstances that might be a risk for historic buildings: leaks, fires. Something as small as a faucet leak, or a dripping roof could do a lot of damage to one of these houses,” he explained.

A position as resident manager on Boathouse Row is hard to come by. Not only is the position well compensated, but the resident manager gets the thrill of living in the historic house. Krajewski adds immediate access to the river, resources like training, equipment, and storage, and being part of the warm, thriving community of the athletes who are regulars on the Schuylkill, a community Krajewski describes as being “like a very large extended family.” 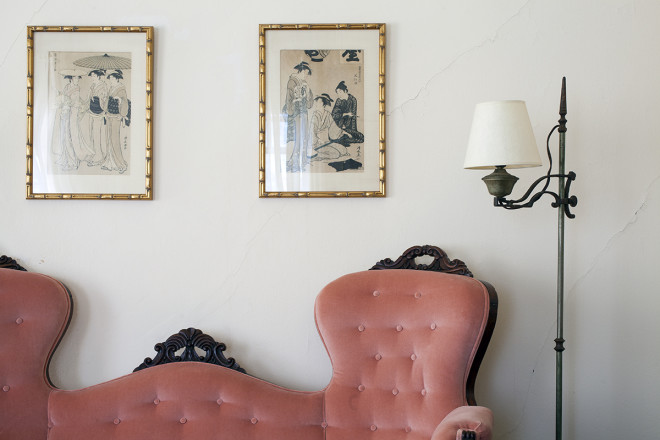 Krajewski’s favorite times at Sedgeley are during heavy rain and snow storms he watches from the club’s glassed in porch surrounding the lighthoude. Some of the most difficult times for Philadelphia–extreme weather, power outages–in fact turn out to be some of the most stunning to experience along Boathouse Row. “I love terrible weather here. Everything gets quiet, almost eerily quiet, but it’s such a contrast to everyday life in the city that I love it,” he said.

The Sedgeley Club is always looking for volunteers, supporters, and new members. Visit the Friends of Historic Sedgeley website HERE.