Late Victorian Charm In The Heart Of Chinatown 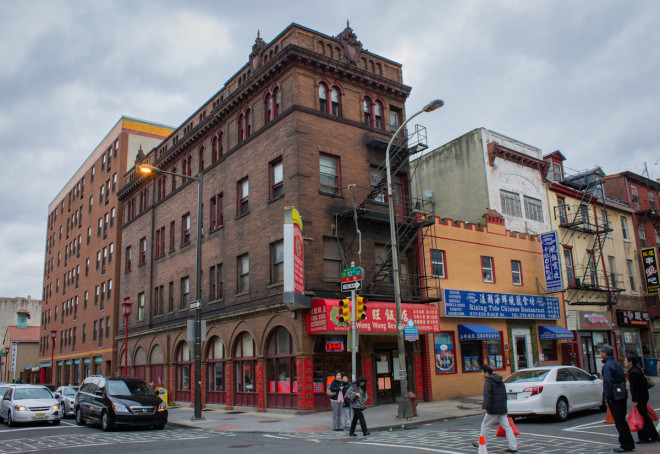 This classy Late Victorian on Race Street is all that and a bowl of wanton soup | Photo: Michael Bixler

The survival of Philadelphia’s relatively small Chinatown over the past century and a half is a blessing. While other cities watch their historic Chinese neighborhoods being swallowed up by gentrification, Philadelphia’s Chinatown is stronger than ever despite numerous attempts to wipe it out. An added bonus of the neighborhood’s survival is its incidental preservation of numerous architectural gems whose many contemporaries to the east, west, and south have all met the wrecking ball. The 115-year-old building at 941 Race Street is one of these beautiful, enduring relics. 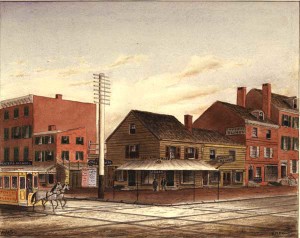 Northeast corner of Tenth and Race Streets, 1883 | Courtesy of the Library Company of Philadelphia

The origins of the building dates back to the beginning of 1900. Daniel Echternach, who lived in a stately home that still stands at 227 South 42nd Street, speculated on some land at the northeast corner of 10th and Race. The location was the southwestern corner of Philadelphia’s earliest version of Chinatown and was surrounded by large printing and pharmaceutical businesses. The lots at 941 Race Street and 201-205 North 10th Street were still untouched by the recent boom in development. Just a few old wooden homes that had been converted into cigar stores stood on the properties. With the two lots Echternach planned to build a new four story, 5,700 square foot office and retail building aiming to take advantage of the neighborhood’s commercial appeal. He commissioned Edwin Gilbert for the design.

Gilbert was the nephew of esteemed architect Addison Hutton and had just recently struck out on his own after years of being his uncle’s apprentice. He would go on to make a name for himself as a general contractor a few years after this particular commission. 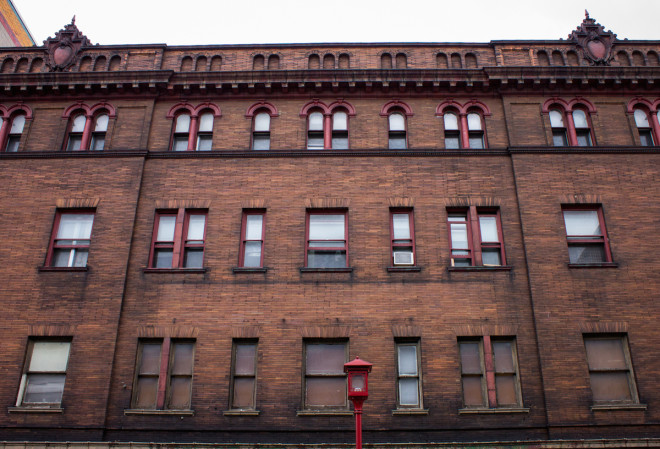 The terra cotta façade may be a tad grubby, but the building’s 115 year old exterior appears to be in great shape | Photo: Michael Bixler

Daniel Echternach died two months after Gilbert completed the plans for the new building, and, very likely, while it was already under construction. Ownership of the property transferred over to his wife, Jane, and a daughter from a previous marriage. The building was finished by the end of 1900.

Gilbert designed this fine corner building in the Late Victorian Eclectic style. The façade’s level of ornament and decoration is stunning, with terra cotta bricks, large medallions, a street-level florentine arch arcade, and even some blind arcading above the cornice, nearly invisible from the street.

A few years after completion, the building was leased by Thomas W. Gillespie, whose family was associated with the 200 block of North 10th Street for nearly a century. The Gillespies home and several of their businesses were all located here. The family opened a hotel at 941 Race Street, cramming 20 guestrooms into the new building. Room and board was one dollar a night. Gillespie’s Hotel went through a major renovation in 1915 after two fires and stayed in service until 1924. 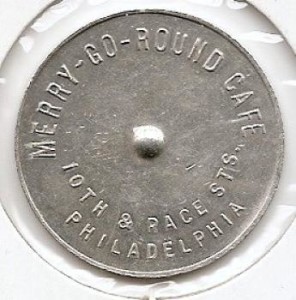 In later decades, the International Alliance of Bill Posters and Billers of the United States and Canada, Local Four leased the building for union offices. In the early 1940s, local entrepreneur Harry Sternfeld (not to be confused with the famous Philadelphia architect of the same name) brought a fast food chain over from California called Merry-Go-Round Cafe. Sternfeld’s restaurant was automat similar to Horn and Hardart, but with one big difference: instead of going to the food, the food came to you. A conveyor belt with compartments of food endlessly rotated along the inside perimeter of a long lunch counter. Customers purchased tokens that gave them the ability to access the fresh food inside. Increased public fear about the transmission of diseases put most Merry-Go-Round Cafe locations out of business by the late 1940s.

Sternfeld’s wife, Rose, purchased the building in 1951 from Clarence & Catherine W. Grosh, who were the last descendants of Daniel Echternach. Rose held the building until her death in the early 1970s. On April 12th, 1972, the building was sold to its current owner, Jong Kai Chin, brother of famous Chinatown entrepreneur and philanthropist King Kai Chin.

The building was in pretty bad shape by this point. The first floor was a bar and the second floor an apartment. The third and fourth floors were sealed off. By the end of 1972, entrepreneur Kam-Chiong Sust opened Imperial Inn on the first and second floors. The restaurant was lauded by critics and recommended in every travel guide of the era. The success and popularity of the Imperial Inn kick-started a new wave of interest in Chinatown cuisine that still endures today. In 1979, Imperial Inn opened a second location in a newly-constructed building at 142-146 North 10th Street, where it eventually consolidated in 1990. 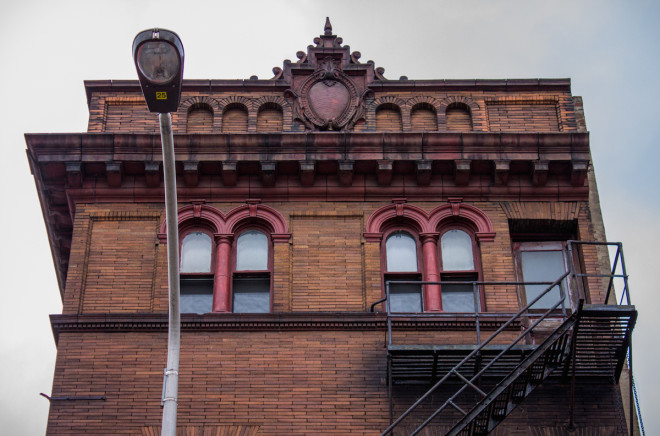 One of the building’s beautiful medallions and distinctive blind arcading | Photo: Michael Bixler

Regal Palace and Lee Ho Seafood Palace have both occupied the storefront, which is today Wong Wong Chinese Restaurant. The upper floors have been converted into apartments under the designs of local architect TeChow Lei.