Give Schuylkill River The Wetlands It Wants 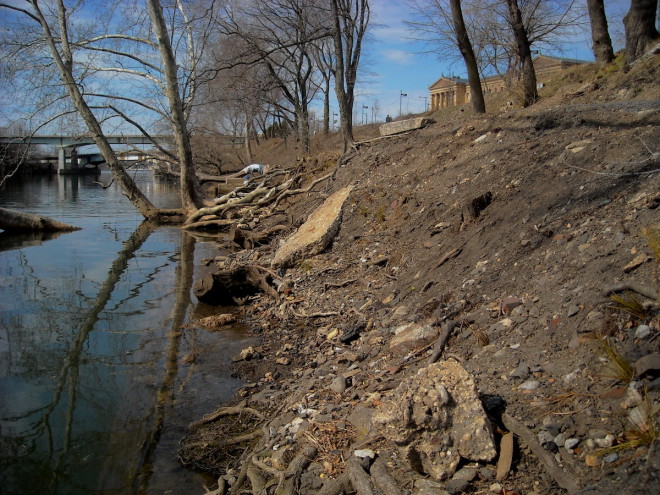 The banks of the Schuylkill River below Paine’s Park | Photo: Sean O’Rourke

An Imagined Conversation with the River

In thinking about the role of the tidal Schuylkill in Philadelphia’s urban ecosystem, I began to imagine, as does the author Beth Kephart in Flow: The Life and Times of Philadelphia’s Schuylkill River (Temple University Press), the river as a character, with its own hopes and ambitions. So naturally I imagined a conversation. “What do you want, river?” I asked. The river said it wanted to be a home for the flora and fauna of a tidal river. It wanted to grow native plants and nurture the animals that live within it. It spoke of the pleasure of the rise of its tide and force of its currents as it meandered to the Delaware.

And then I asked the river about people. It said it enjoyed the conversations of the fishermen on its banks and the kayakers floating with its current. It enjoyed the energy of the bikers and the runners on the trails. It didn’t mind the children who dropped tennis balls from the bridges when it freezes over. It was happy knowing that the lovers laying on the grass and the book readers and sun seekers were attracted to its banks.

But the river admitted sheepishly that it also gained some gratification when its banks overflowed and people came to marvel at its muddy power as it washed downstream in a wide verge. I asked about the storm water from the inlets and city streets it said that this was an acquired taste that was never so easily swallowed. When asked about the expressway it remained silent.

With this week’s announcement of funding for “Bartram’s Mile,” the next phase of development of the Schuylkill Banks, it seems a particularly good time to look at the river and recognize its potential as a tidal river ecosystem that could be restored, nurtured and highlighted. The Schuylkill River Development Corporation’s decades long work to create a riverside park from almost nothing and at great effort and reasonable cost has transformed the relationship between people and the river.

That’s why it’s so important to design future phases of the Schuylkill Banks to promote a natural habitat that supports biological diversity for the fish, birds, and terrestrial animals that can connect to the larger ecosystem of the region’s watershed. Let’s design a naturally resilient ecosystem that works to restore and maintain the health of the river. A healthy urban tidal river ecosystem could add another layer of meaning and significance to Schuylkill Banks that further strengthens a connection to the people that uses and loves it. We should honor the river with the respect it deserves.

But I hope the work isn’t finished there.

My wish is that the SRDC recognizes that stewardship of the river itself should be the next top priority and that it has an obligation to honor the Schuylkill by giving it what it wants. And it wants more than just pilings driven into its bottom, boardwalks built overhead, and its bulkheads repaired. It is time that the SRDC begins looking for opportunities to restore the tidal river ecosystem.

Where do you start? Stand along the river bank below Paine’s Park and look at the river’s edge. The bed is filled with an array of trash and debris. A massive cleanup campaign should take place and the riparian edge (the bank of land above the water) should be landscaped with native plants.

Continue down the trail to Walnut Street and look across the river toward the Schuylkill Expressway. From Walnut Street Bridge all the way to University Avenue Bridge, the Expressway sits on concrete piers and with rip-rap stones stepping up under the raised highway into the river and between the abutments. This whole area could extend into the water as fingers of vegetation that create a variegated river’s edge to provide a protective, in-channel habitat for young fish, amphibians, and insects along the new irregular shoreline.

Now that construction on the boardwalk is complete is is time to finish the job by creating wetlands. Imagine the bulkhead stepping down into a wetland habitat that changes character as the tides rise and lower through the day. Bulkhead replaced with reed beds, riparian vegetation, and a naturalized shoreline increases the complexity of the habitat for the animals. Imagine standing on the west side of the boardwalk to watch the sunset then crossing over to the east side and taking in a dense wetland habitat. 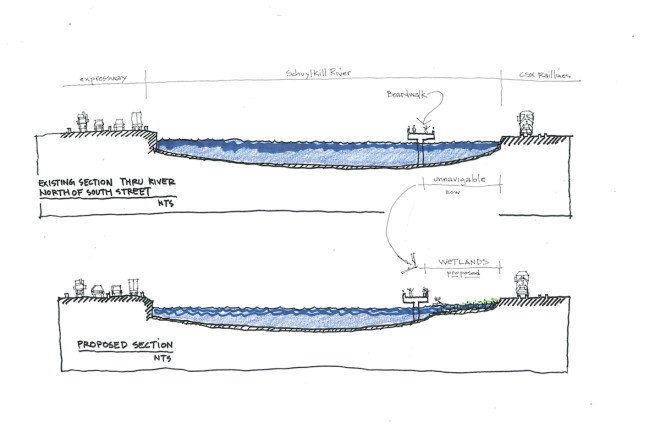 Regarding storm water opportunities, the Schuylkill Banks could become an integral part of the Philadelphia Water Department’s sustainable water management plans to mitigate immediate storm water runoff and remediate toxic pollutants. The number of Center City outfalls that empty into the Schuylkill is staggering. Several streams feed into the Lower Schuylkill along its entire stretch. These covered streams could be restored to provide the necessary natural water flows for aquatic flora and fauna. Stand in the intersection of 26th street and Pine Street over the manhole next to the post box and listen to the water running toward the river. The Schuylkill Banks is positioned to be a great filter for all this water that is finding its way to the river.

University of Pennsylvania’s Grays Ferry Crescent is the longest length of non-bulkhead river edge left in the area and a beautiful bend in the river. Imagine removing the fence so people could access the river’s edge and designing this area as a floodplain, as meadow or forest that allows the river space to expand and contract. These long bends in the lower Schuylkill River, with their dredged channel for navigation and scoured and shoaled edges, beg for attention.

Sean O'Rourke Sean O'Rourke, AIA, is an architect at Bergmann Associates. He has lived, practiced, studied, and taught in Philadelphia since arriving here from college in 1984.