Demolition Of Boyd Auditorium Imminent, Though Lobby And Hall Will Stay 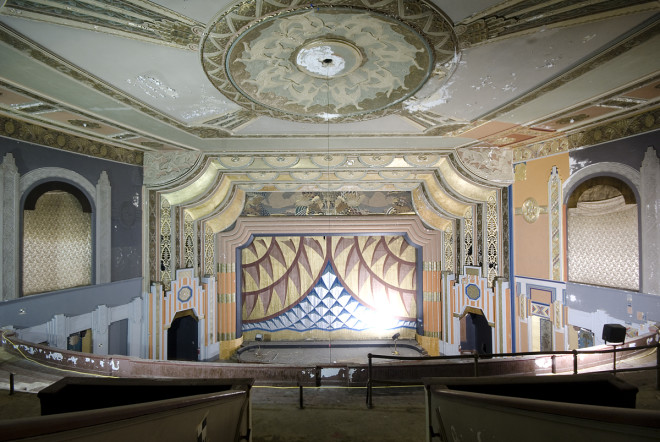 Partial demolition permits have been placed on the long boarded up doors of the Boyd Theater, Philadelphia’s last remaining movie palace. Pearl Properties intends to raze the 87 year old theater’s auditorium and, it is speculated, incorporate the façade into a residential tower. Last March, an economic hardship was granted to developer Neal Rodin by the Philadelphia Historical Commission, allowing everything but the theater’s facade–placed on the Philadelphia Register in 2008–to be leveled. In an unexpected turn of events, Pearl acquired the property from Live Nation and has recently committed to renovating the ornate Art Deco grand lobby and foyer. Plan Philly reports that, although demolition is at hand for the surrounding block, the developer hasn’t revealed building plans and intended use for the theater. For now, how the interior and façade will interface with the new construction remains a mystery.

Howard Haas, the Center City attorney who organized and led the nonprofit Friends of the Boyd since 2002, says that while losing the auditorium is a significant loss for the city and a serious blow to grass roots preservation efforts, all is not completely lost if Pearl principals James R. Pearlstein and Reed J. Slogoff follow through with their commitment to retain the lobby and foyer. “If the Boyd’s facade is restored in accordance with the renderings from the prior plan, which are included in our Settlement Agreement, and the grand lobby and foyer are restored to their Art Deco elegance, then some measure of the Boyd’s identity and history will remain,” said Haas. Original plans for restoration of the interior previously included just the small ticket lobby. “Many of our supporters appreciated that the prior plan kept the Chestnut Street facade. This plan goes further, in keeping the Art Deco interior from Chestnut all the way to Sansom Street, though it does lose the auditorium.” Pearlstein and Slogoff’s reasoning behind retaining a significant portion of the theater’s grand interior has yet to be revealed. 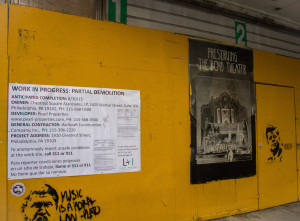 Haas maintains that the loss of the Boyd comes from City officials’ preference for big-ticket developers and the failure in giving the theater due process in hearings overseen by the Philadelphia Historical Commission. “Philadelphia failed to save the glorious Art Deco auditorium which hosted many film premieres, appearances of Hollywood stars and exclusive runs of landmark films and is losing an auditorium with perfect sightlines for all its 2400 seats,” said Haas. “History won’t understand how Philadelphia lost the Boyd auditorium, even more so due in part to the scorched earth tactics of damaging the auditorium to prevent an appeal and then not even proceeding with their reuse plans.”

For our extensive reporting on the Boyd Theater saga, click HERE