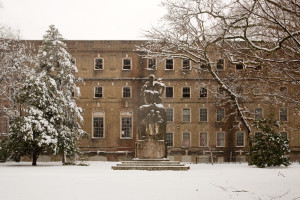 With the future of the Germantown YWCA in jeopardy, and neighbors conflicted over future development of the building and its site on Germantown Avenue, Eight District Councilwoman Cindy Bass promised this morning to stabilize the structure, which has been damaged several times by fire.

Bass will assign $2.2 million in Neighborhood Transformation Initiative funds for the building’s renovation and weatherization. Bass’s office indicated this morning that the Philadelphia Redevelopment Authority has set aside an additional $4 million for rehab of the property.

“When I took office in 2012, the question of what to do about the YWCA loomed large, as this building is an integral part of the neighborhood’s history,” she said. “And while we are still working towards a final answer, I am beyond pleased that we have endeavored to explore additional options. I am most impressed with the creativity of the ideas that have been presented thus far, and nothing less should be expected in and for Germantown.”

The Department of Licenses and Inspections recently completed an engineering report on the building. The investigation, with assistance of former L&I commissioner Bennett Levin, concludes that the building is structurally sound and does not need to be demolished. The Redevelopment Authority will issue a request for proposals this spring for development of the buildings. Bass stressed that the RFP will emphasize preservation and reuse.

This will be the Redevelopment Authority’s second RFP for the site. The first resulted in a proposal by a partnership of the non-profit Mission First and developer Ken Weinstein for subsidized senior housing. Bass rejected the proposal as not significantly transformative and without other options neighborhood residents began to fear the historic building would be demolished. After a public meeting in January, neighborhood residents and advocates pushed the Councilwoman to seek other alternatives.

“We have to be thoughtful and deliberate about development in Germantown-just as we have in Mt. Airy and Chestnut Hill. Nothing less will be acceptable,” Bass said this morning. “With the NTI funds I am committing to this project, it will help make the site more attractive to developers while protecting a vital part of our City’s history.”

Bass indicated that developers have approached her with ideas for market rate housing, offices, and retail and recreation uses.