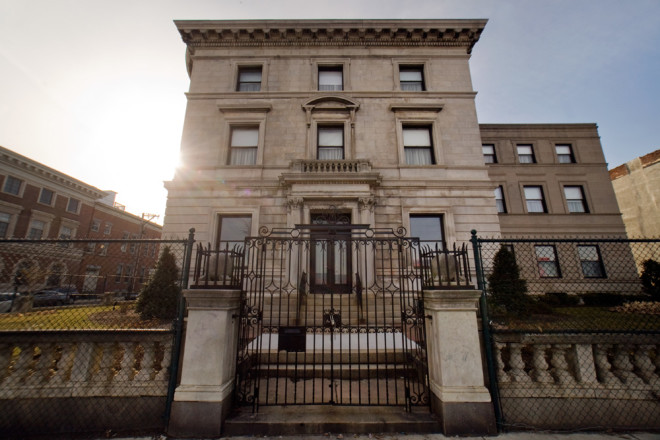 This morning, The Temple News confirmed that the university’s Board of Trustees has approved the demolition of William Penn High School. The school, designed by Mitchell/Giurgola and opened in 1970, was the contemporary of H2L2’s University City High School—currently being demolished by Drexel University. William Penn joins Barton Hall, Beury Hall, and the Biology-Life Sciences Building on Temple’s demolition docket. A block up the street from the high school, on the west side of the 1500 block of North Broad Street, Temple has demolished six properties in the past two years. Could the historic Burk Mansion be next? 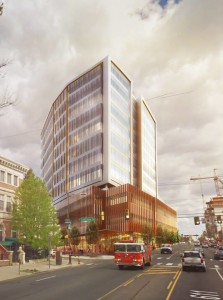 “The Nest,” a proposed hotel on the site of the historic Burk Mansion | Image via Skyscraperpage.com, architect unknown

Skyscraperpage super sleuth summersm343 posted a rendering on that web site’s forum on Saturday that shows “The Nest,” an 11-story, full service hotel proposed for the northwest corner of North Broad and Jefferson Streets, where the Burk Mansion has stood since 1909. The late Victorian Italian Renaissance home was built for Alfred E. Burk, one of the Burk Brothers who built a leather empire at their manufacturing complex in Northern Liberties, where Liberty Lands Park is now.

The last standing of what was once a parade of grand mansions along North Broad Street, the Burk house has been owned by Temple since 1970, a year before it was added to the Philadelphia Register of Historic Places. The university bought the 27-room building and its low-slung conservatory facing Carlisle Street from the Upholsterers International Union, which had owned and occupied the building since 1945.

In a 2011 story, The Temple News said that Temple operated an “award winning” daycare center there for its employees, students, and North Philadelphia neighbors. The center took a hit in 1993 when a fire damaged the building; Temple closed the house in 1995. For the past 20 years, it has sat vacant with a chain link fence affixed to its handsome stone balustrades and iron gate. The same story said that Temple had proposed repurposing it for the Honors Program, but that the $44 million renovation took a back seat as the economy went south.

But any redevelopment of the site as a hotel, particularly one that includes the Burk’s demolition, comes as news to Temple. University architect Margaret Carney says matter-of-factly, “we did not commission this.” Elaborating, she says, “a lot of times a developer will show us an idea for a site, and we have to take it with a grain of salt,” adding that the university recently published its master plan after an intensive planning process. The plan, however, makes no specific mention of the Burk Mansion. 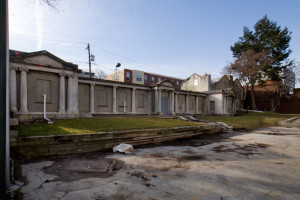 The Burk property goes from Broad Street to Carlisle Street in the rear, where this conservatory faces the house | Photo: Bradley Maule

Carney also indicates that while the mansion is empty, it’s not uncared for. “We’ve invested over a million dollars just to stabilize the roof,” Carney says. “We’ve worked closely with the Historical Commission,” she says, referencing new lights, heating, and ventilation that have also been installed, along with improved landscaping along Broad Street and historically sensitive lanterns on their way.

Philadelphia Historical Commission executive director Jon Farnham confirms the interaction. “My staff and I have had numerous conversations with Temple University about the preservation of the Burk Mansion over the years and worked extensively with Temple on stabilization efforts at the house,” he said via email. “Temple has neither inquired about the demolition process nor submitted a demolition application for the Burk Mansion.”

Interestingly, the mansion’s listing on the Register contains an address of 1500–1510 North Broad Street. Two years ago, the latter address, a four-story row house with a stone façade, was demolished by Temple, which cited “structural failures.” Since the building was on the Register, its demolition had to first meet the approval of the Commission.

According to PHC staff in 2013, the demolition of 1510 North Broad Street was approved because the building stood on its own parcel at the time the Burk property was designated in 1971, but was only later consolidated into the designated lot. It was therefore not technically a contributing feature of the Burk Mansion’s designation, and was never designated individually.

That leaves only two buildings on the block still standing and not owned by Temple: the Rite-Aid on the corner of Oxford Street with a surface parking lot fronting Broad, and the former Levin Funeral Home at 1512 North Broad. The three-story art deco building, designed by Edwin Rothschild and adorned by two decorative urns, opened in 1933. It was added to the Philadelphia Register of Historic Places in 1985. It’s now the Original Apostolic Faith Church of the Lord Jesus Christ. In October, pastor Bishop Ernest Tookes told The Temple News that he has no plans of selling out. 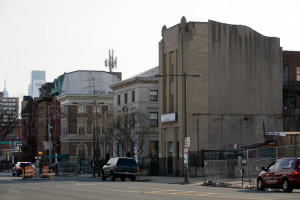 That said, the building is on the radar of the Historical Commission. “One of my staff members recently had a conversation with someone associated with the former Levin Funeral Home, who asked about the demolition and rescission processes,” Farnham said. “However, the Historical Commission has not received an application to demolish the funeral home building or rescind its designation.”

With Temple already having leveled six neighbors on either side with no plans to replace them beyond some newly planted grass, it’s natural for the church to ponder its own fate.

As for the Burk Mansion, it’s not going anywhere . . . but it could use some help. “We’ve considered lots of options,” Carney says, mentioning an alumni house and a president’s house as options that have floated in addition to that of the Honors College hall. “We’re just going to continue keeping it safe and sound until we find the right purpose.”

The Burk Mansion’s design came from the firm of Simon & Bassett, who also designed the Pomerantz Building, which made the Philadelphia Register of Historic Places in the Historical Commission’s last round of nominations two years ago.