Before The Bro Bar: Unboxing The Former Home Of Finnegan’s Wake 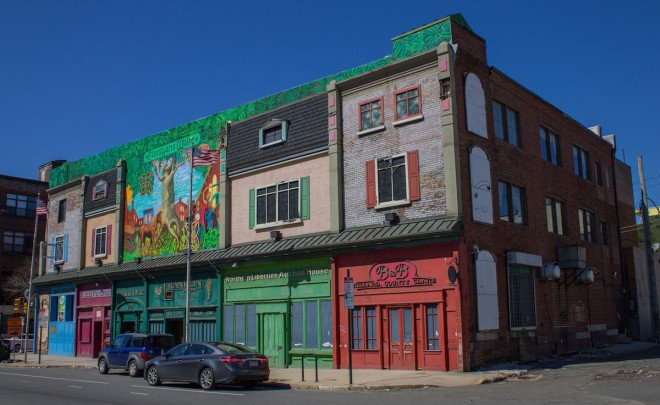 The bar and venue are still intact inside Finnegan’s Wake, but the doors are locked for good | Photo: Michael Bixler

Finnegan’s Wake was a landmark Philly “Irish pub” to some and a distasteful nuisance bar to others. Now closed after 18 years in business, the bar at 2nd and Spring Garden Street still evokes strong emotions to those who recall its contentious legacy. The history of the building itself, though, tells a fascinating story about the movement of 20th century industry within the city and neighborhood renewal in Northern Liberties.

Thinking Inside The Box

The United States Paper Box Company moved to Philadelphia in the mid 1900s after bottoming out in New York City, setting up shop at a long-gone factory building that once stood at 1109 Locust Street. The company had much more success here than in NYC and in only a few short years later they purchased the site of the old Frederick Braun Leather Tannery at 537-41 North 3rd Street in Northern Liberties, where they built their own box-manufacturing headquarters on a 60′ x 112′ plot of land nestled between a stretch of aging row houses.

USPBC overestimated the amount of space they needed upon moving in so they leased out one of the floors to Paxton & O’Neill, a manufacturer of pantyhose-knitting machines.

In 1921, the company sold the building and moved to 1007 North Front Street– now the massive intersection between I-95, Front Street, Germantown Avenue, Laurel Street, and the El. 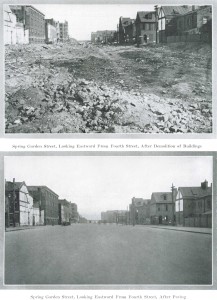 The Datz Manufacturing Company, one of the most successful of Philadelphia’s box-related companies, was the building’s next occupant. The 50-year old manufacturer upgraded the space and installed a Quadruple Stayer–a machine that shaped flat forms into a box shape and applied stay paper, which bonded the corners on all sides at once. Boxes produced with the Quadruple Stayer–built by local manufacturer Stokes & Smith–were considered of lower quality, but could be made five times faster than ones assembled on a Single Stayer.

Two years after Datz moved in, the City extended Spring Garden Street east past 5th Street through to Delaware Avenue, wiping out much of the Northern Liberties’ architectural history. The extension spared the Datz Factory, leaving its southern party wall exposed to the world, complete with the interior wall coverings of the row house that once stood next door. The old Temperance Hall across the street also survived the destruction.

On the night of December 27th, 1947, a massive fire enveloped the building, destroying all the machinery and box stock. The damage totaled to $75,000. Twenty-five people living in six homes nearby were evacuated. The fire was so large that night that the morning newspapers incorrectly declared the building destroyed. Though heavily damaged, the old box factory survived thanks to Andrew Sauer’s fireproof design.

Datz completely recovered from the damage. Two weeks after the fire the F. B. Davis Company was contracted to rebuild the factory–the woodwork, roofing, electrical wiring, elevator, and windows were all replaced. Datz would go on to use the building until 1957, when the Standard Casket Company of Philadelphia moved in. Their former factory at 1406 North 11th Street was razed to make way for the Harrison Plaza housing project. Standard Casket would produce coffins at this location for the next few decades.

A Paddy Pub For Politicos 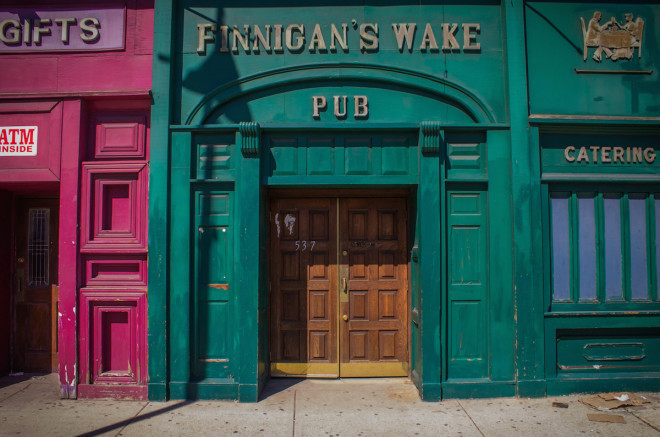 In 1996, the now derelict and dilapidated building was purchased by the investor group Northern Liberties Auction Inc.–a partnership consisting of former State Senator William Stinson, former Casey administration cabinet member William Driscoll, and lawyer/former City Council candidate Charles Volz, Jr. The association’s proposed a massive conversion that would include a restaurant, gift shop, concert venue, dance floor, and even an auction house. The project, Finnegan’s Wake, was named after the 1850s Irish folk song (not the James Joyce novel). With a faux Dublin street façade, Finnegan’s opened on March 1, 1997 and was lauded as the largest Irish pub in the tri-state area. Congressman Bob Brady, who contributed a small investment to the place when it first opened, said, in the Inquirer, “It’s gonna be a nice classy place.”

The bar became a great success almost immediately. It was Democratic City Committee partyhouse and an attraction for convention visitors, celebrities, and the bridge crowd. In 1999, the auction house use of the building was eliminated and the whole building became one massive multi-floor, 19,000 square foot restaurant, bar, catering, and concert space. On Saint Patrick’s Day, 2006, Stinson and partners dedicated artist Paul Santoleri’s mural “In the Shadow of the Wood” above the front door facing spring Garden Street.

Eventually, Finnegan’s Wake became a victim of its own success. The bar’s popularity with the college and bridge crowds kept business strong well into the 2000s, while the noise and rowdy atmosphere it created angered nearby neighbors in this quickly gentrifying part of town.

In 2012, members of the Democratic City Committee–which included Finnegan’s investors–built their new headquarters right next door. While that building was under construction, tensions between the venue and the neighborhood came to a head when the bar’s owners proposed a massive renovation of Finnegan’s that included 14’4″ wide balconies on the second and third floors overlooking Spring Garden Street and the elimination of a small section of North Bodine Street along the building’s eastern side, which would serve as an outdoor deck and a separate catering entrance. The façade would be totally redone and the 2006 mural removed. 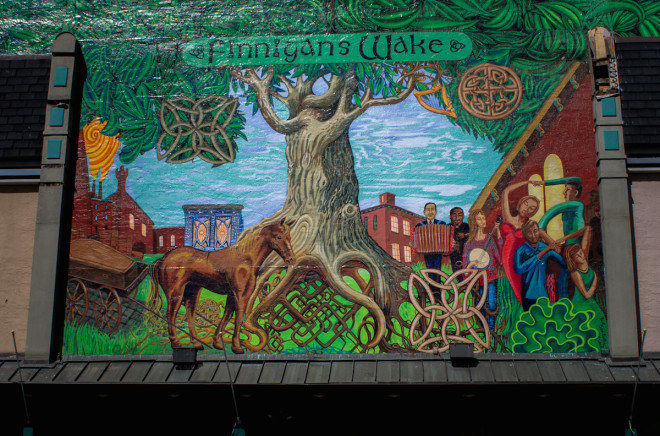 Paul Santoleri’s mural, “In the Shadow of the Wood” | Photo: Michael Bixler

Hundreds of neighbors signed a petition condemning the renovation and removal of Bodine Street. The bar’s proposal was opposed by both the Northern Liberties Neighborhood Association and the City Planning Commission. Then neighbors learned the bar was going to receive a $74,000 grant from the Penn Treaty Special Services District for a “community beautification project.” The request was later withdrawn amidst neighborhood anger. City Council eventually approved the balconies and the elimination of the Bodine Street segment from the city plan despite a mayoral veto and the ire of neighbors, who accused the bar’s owners of receiving special treatment because they were politically connected. The redevelopment, however, never broke ground.

The old United States Box Factory building was put up for sale in September, 2013 for $5 million. A year later, the price was reduced to $3.9 million. The venue has been closed since last summer, after a contract for the sale of the building fell through. To date, the bar and venue does not appear to have been put back on the market.