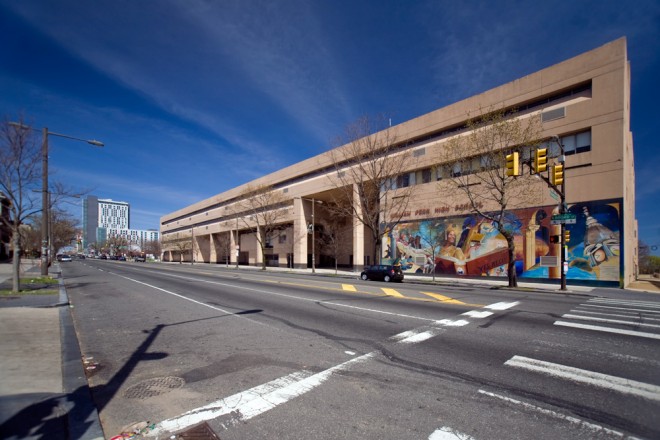 Next on the chopping block: William Penn High School, which Temple University has authorized to demolish | Photo: Bradley Maule

Over the weekend, a rendering surfaced showing a hotel proposed for the site of the circa-1909 Burk Mansion, owned by Temple University and on the Philadelphia Register of Historic Places since 1971. As we learned yesterday, that proved to be a false alarm. But indeed, the alarm sounded largely on account of Temple’s recent run of demolitions, to which William Penn High School was added this week.

Temple purchased the high school, which opened in 1970 with a design from Mitchell/Giurgola (the origins of MGA Partners), last year. The university plans to begin demolition soon, but has not revealed what it will build in its place. That’s not unlike two other demolitions currently wrapping up: one just up the street from the Burk Mansion on the west side of the 1500 block of North Broad Street, and one at Broad & Ontario. At the former, Temple demolished five contiguous buildings that included Temple Garden restaurant and the Zavelle bookstore, with no immediate plans to replace them. James Creedon, Temple’s senior vice president of construction, facilities and operations, told The Temple News that the University’s plan was to “take them down, keep the area clean and neat, and down the road . . . sort out how to use the site.”

With William Penn High School, which anchored the Yorktown neighborhood for 40 years, set to become a vacant lot like those at the former sites of the Zavelle bookstore and Old Medical School Building, we decided to survey additional North Philadelphia landmarks that Temple, in a similar mode to other educational and medical institutions here and elsewhere, has cleared for campus and medical complex expansion. Here’s some of what we’ve found. 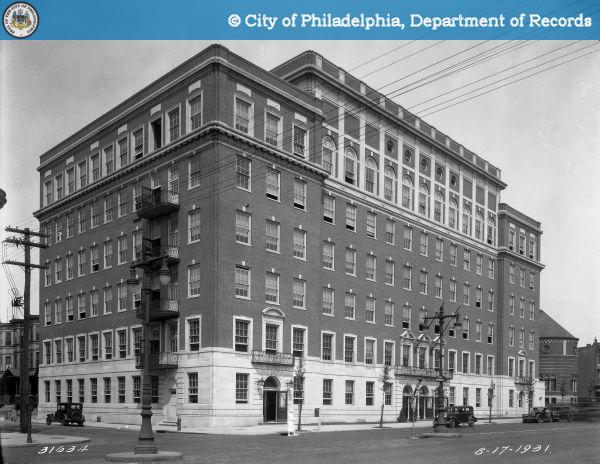 At Broad and Ontario Streets, Temple is nearly finished with the $7.45 million demolition of its Old Medical School Building. Completed in 1930, the seven-story building was designed by architect William Harold Lee (1884-1971) and was the first major building for what is now the Temple University Health Sciences campus. Lee designed mostly theaters and academic buildings. Larry Kaiser, dean of the School of Medicine, told the Inquirer in October that there are “no definite plans” for the site. 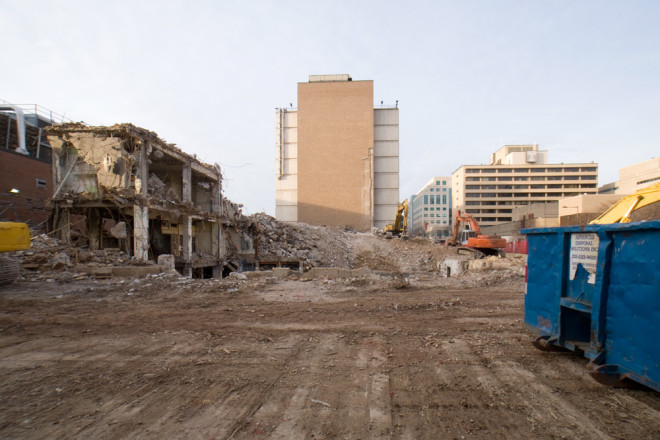 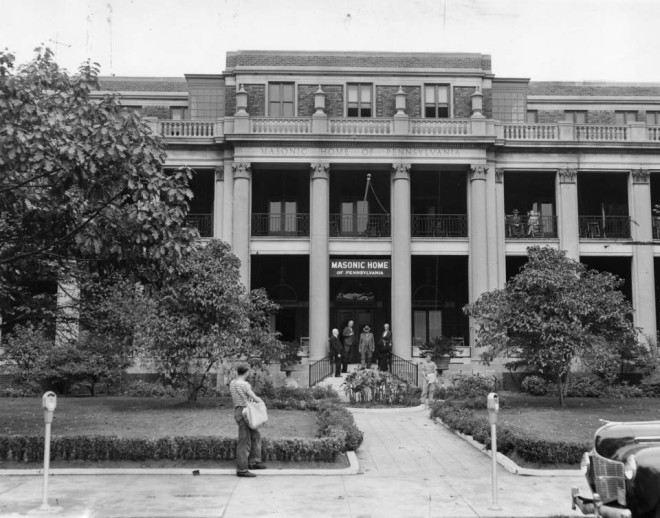 Catercorner to the Old Medical School Building, Temple quietly demolished the former Masonic Home of Philadelphia, located at the southeast corner of Broad and Ontario Streets within the past few years. The home—originally two Italianate mansions—opened in 1885. In the early 1920s, it was redesigned by Ballinger Company. (During that same period, Ballinger designed the Tindley Temple United Methodist Church, which last year won the local chapter of the AIA’s prestigious Landmark Building Award.) Currently, a grass lawn occupies the site. 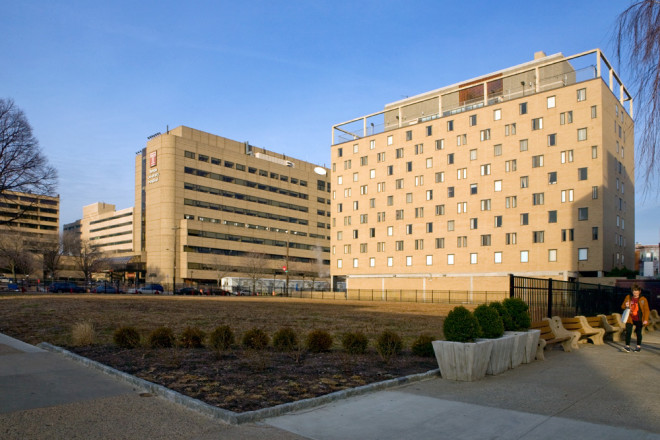 The former site of the Masonic Home of PA is now a grass lawn that affords views of the hospital | Photo: Bradley Maule

Temple University founder, Rev. Russell Conwell, established Samaritan Hospital in 1891. The community-serving “charity hospital” grew quickly, necessitating a 1920s expansion. The hospital was demolished in the early 1980s to make way for the hospital building left of center (with the Temple ‘T’) in the photograph above. 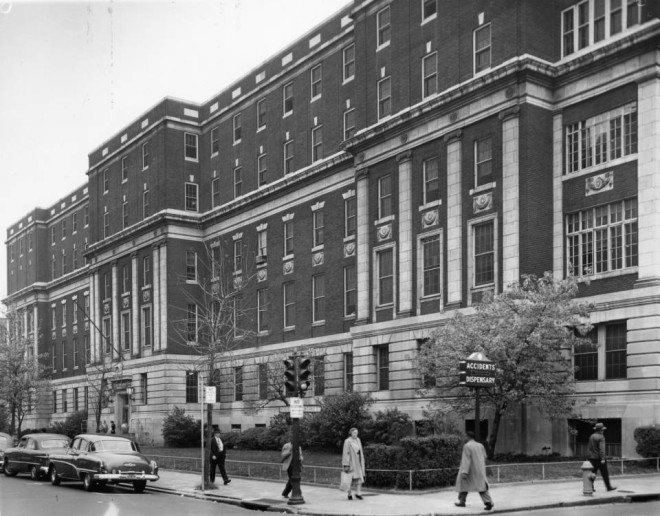 The 1800 and 1900 blocks of Park Avenue, which comprised the Park Avenue Historic District, were acquired by Temple in the 1920s and the 1950s, respectively. According to the 1990 nomination to the Philadelphia Register of Historic Places, the brick rowhouses that lined the west side of the street possessed “significance as one of the most intact remnants of a type of development that came to dominate North Philadelphia during the period of its greatest growth and prosperity.”

All that remains of the 1800 block of Park Avenue is a group of facades that have been incorporated into a single contemporary building (called 1810 Liacouras Walk) and a small church (Shusterman Hall). 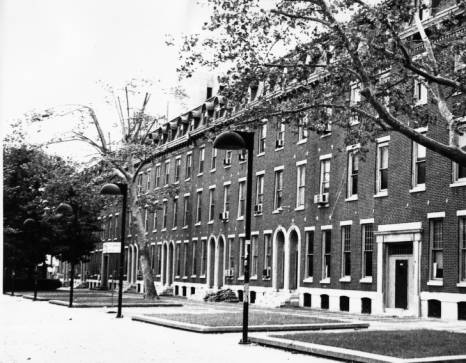 Temple cleared the non-historic east side of the 1900 block of Park Avenue in 1959 to make way for Barton Hall. The university gained control of the site, then consisting of mostly occupied homes, after the Philadelphia City Planning Commission deemed the block and several surrounding blocks as “blighted” in the 1955 Northwest Temple Redevelopment Area Plan.

According to Temple University: 125 Years of Service to Philadelphia, the Nation, and the World, the architect of the university’s 1955 master plan, Nolen & Swinburne Associates, complained that the “squeeze of the slum area is becoming intolerable” and went on to say that Temple was positioned, finally, “to wipe the slate clean from the ground up.”

The sentiment now comes full circle, as Nolen & Swinburne’s Barton Hall will itself come down, to make way for a new central library designed by Snøhetta. Likewise, their Beury Hall and Biology-Life Sciences Building will come down to create a new quad that will face both the new library and the old one, Paley Library, will become a welcome center and café. 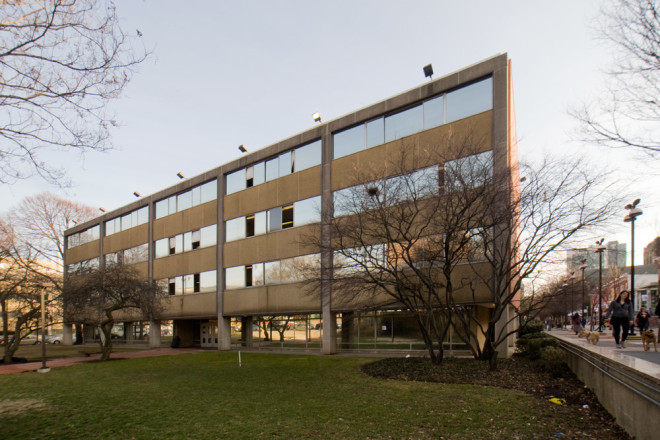 Barton Hall will be replaced by a new Snøhetta-designed library | Photo: Bradley Maule 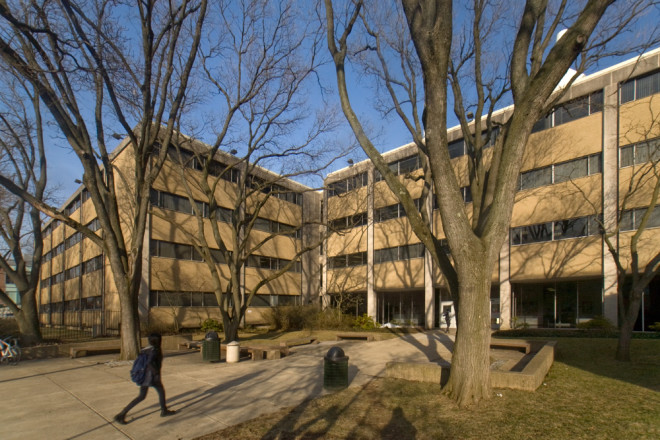 Beury Hall, designed by Nolen & Swinburne in their master plan, has two halves: a northern, workaday section with yellow brick. The southern end is more gloriously mid-century modern, a little reminiscent of a Flintstones dwelling. The southern end opens directly onto “Beury Beach” and the Bell Tower, facing Paley Library. Its curving western wall, facing its mirror image across 13th Street on the back side of Barton Hall, was built with a Sandy Calder-esque tile mosaic. In 1984, the mosaic was replaced with the Michael Graves-like postmodern abstract art wall by John Botkin. 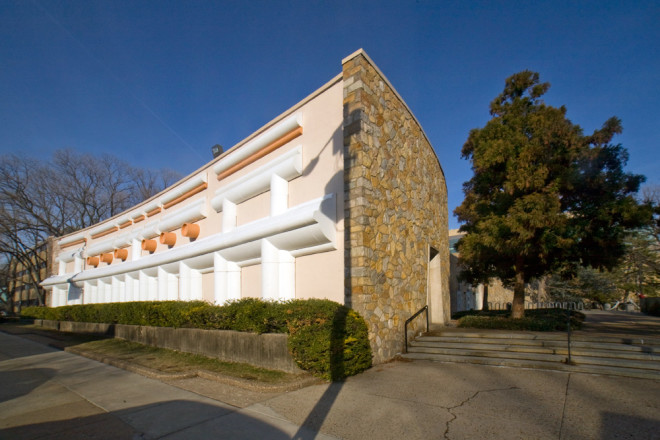 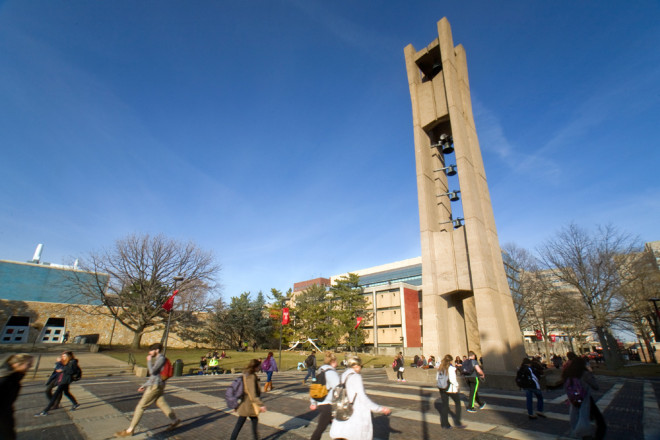 Currently the largest green space on campus, the quad around Temple’s Bell Tower, will be expanded greatly after the demolition of Beury Hall and the Biology-Life Sciences Building–the two buildings pictured to the left of the tower in the photo above.

Though not designated as historic, Temple demolished numerous lived-in rowhouses of similar character. The homes pictured below, located at 13th and Norris Streets, were cleared in the mid-1960s by the Philadelphia Redevelopment Authority in order to make way for Temple’s expansion. Hundreds of residents were displaced. 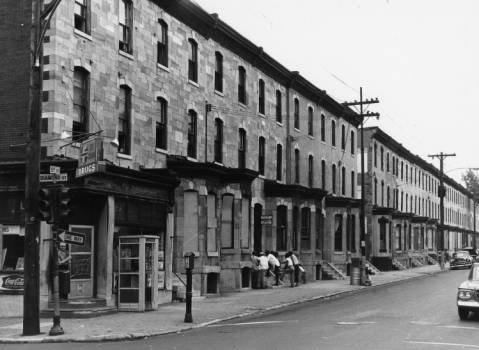 Likely designed by architect Louis Caron Hickman (1863-c.1917), Tioga Baptist Church was located at 3420 N. Broad Street, between Oxford and Tioga Streets. Temple bought the church from the congregation, which relocated in 1960, and subsequently demolished it to make way for the School of Medicine’s Medical Research Building. 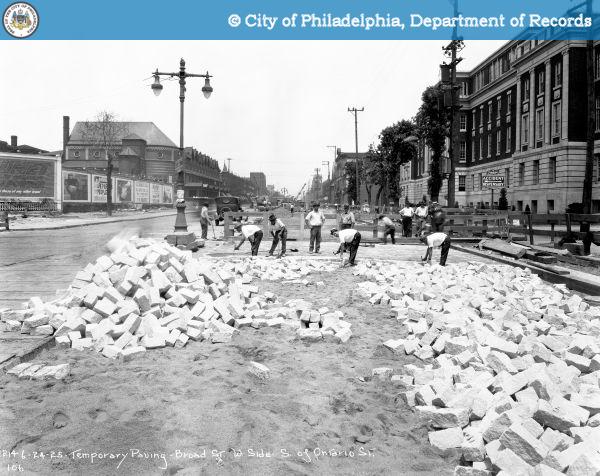 Located at the northeast corner of Berks and Marvine Streets—which no longer exists, now occupied by the plaza between Anderson and Gladfelter Hall—Grace Baptist Church preceded the historic Baptist Temple (now the Temple Performing Arts Center, which the Preservation Alliance for Greater Philadelphia awarded with its Grand Jury preservation award in 2011). Baptist Temple is heralded as the birthplace of Temple University. In fact, Temple College’s first classes were held in this church’s basement until outgrowing it. Temple demolished the church, last home to Abyssinian Baptist Church, in 1969. 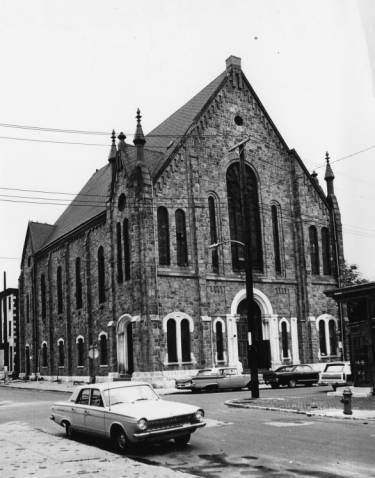 Oxford Presbyterian Church, the brownstone church featuring a 170-foot tower, watched over the intersection of Broad and Oxford Streets for a century. In 1967, twenty years after the congregation relocated to Mt. Airy, the City Planning Commission designated a 620-acre tract of land (which encompassed the church and much of the land to its southeast) for the Temple Redevelopment Area. Sometime between 1967 and 1973, the church building and adjacent parking lot were demolished to make way for the University Services Building. The University Services Building, which failed to attract commercial tenants as planned, was itself demolished and replaced by Morgan Hall. By far the tallest building in North Philadelphia, the three-part residence hall opened in 2013. 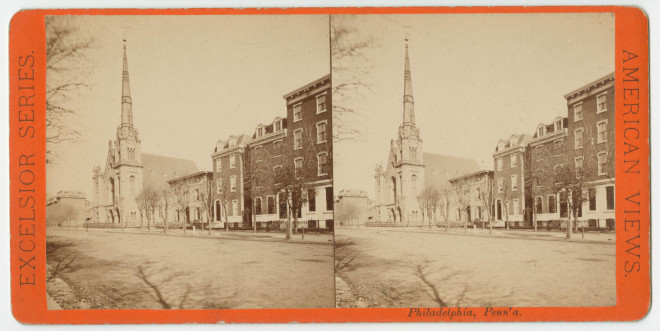 Park Avenue Methodist Episcopal Church was completed in 1886 by local firm Hazlehurst & Huckel (fl. 1881-1900). From 1942 until 1998, Temple made use of the complex, which included a main building, an education wing, and a parsonage. Despite the fact that it was on the Philadelphia Register of Historic Places (it was part of the Park Avenue Historic District) and the protests of former occupants including former employees of radio station WRTI, it was demolished in 1998 to make way for dormitories. (No photograph available)

Monument Cemetery is an infamous example of hasty, campus expansion. Opened in 1837, it was Philadelphia’s second rural cemetery. Temple acquired the cemetery–as well as the responsibility to relocate the 28,000 buried there–in 1956. The university did so by convincing the city to condemn the property, which hadn’t seen a burial since 1929 and had been falling into disrepair.

Temple relocated the bodies to Lawnview Cemetery in Montgomery County. All but 300 of the bodies were placed in a mass grave at Lawnview while their headstones were sold to builders as rip rap (foundation stone) for the Betsy Ross Bridge. Eerily, some of the headstones become visible when the Delaware River reaches low tide. 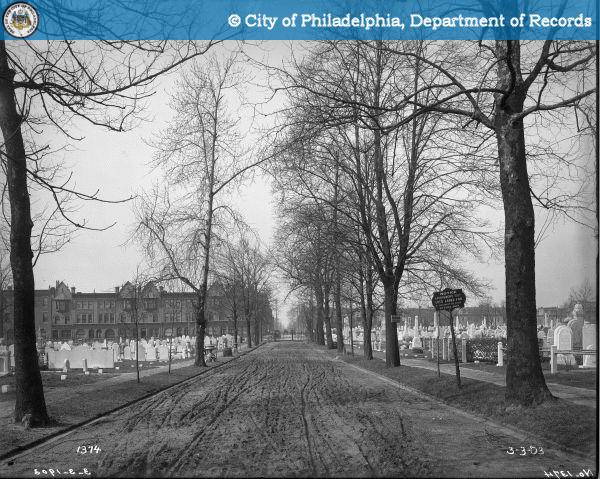 Temple acquired the Hardt Building of the Integrity Trust Company, located at the southeast corner of Broad Street and Cecil B. Moore Avenue, at auction in December of 1958. Originally, the building housed a banking floor and offices for bank officials. During Temple’s occupancy, it hosted Temple’s Technical Institute, Campus Information, and a high school. In 1980, the Paul Philippe Cret-designed building was torn down to make way for a visitors’ parking lot. 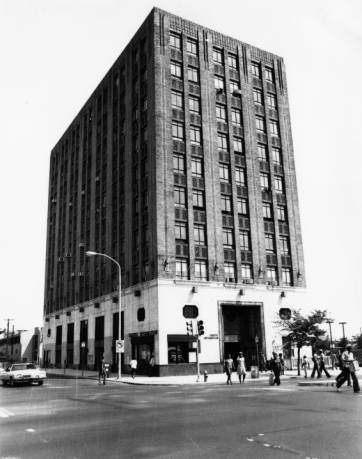 The Grand Opera House, designed by theater architect Hoffman-Henon, opened in April of 1888 at the southwest corner of Broad and Montgomery Streets. It was built by the Betz Germania Brewery, which operated a brewery and, for a time, a beer garden immediately south of the venue. Because Philadelphia could not support three opera houses, the theater was sold to the Nixon chain in 1912.

From 1938 until 1988, the building housed a Wilke Buick dealership. The owner of the dealership, described as a long-time friend of Temple in a 1988 Philadelphia Inquirer article, sold the building to the university in 1988. Two years later, Temple demolished the building. In its place stands the Liacourus Center. 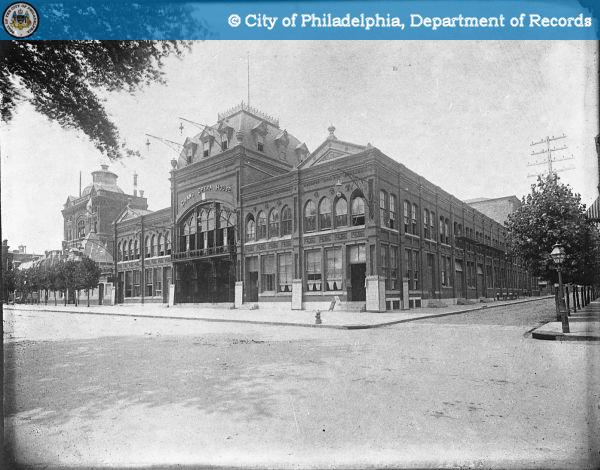 This list is not a comprehensive, though it does demonstrate that Temple University has not practiced selective demolition, past or presently. Landmarks along and within the vicinity of North Broad Street have been razed for campus expansion and new development. While certainly decisions were made in the context of evolving notions of urban and campus development, the social and historical cost of demolition is high. Few would argue that the expansion of Temple’s campus and its medical center hasn’t enormously benefited the city’s economy or helped to stabilize North Philadelphia. But consideration of the record may help in seeing the way forward during this present period, defined as it is by enormous development pressure and institutional growth.