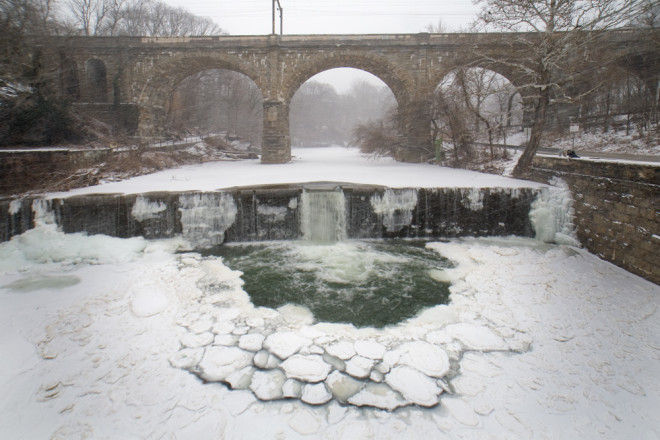 Man and nature come together in this wintry display at the spillway of the lower Robeson dam, once part of a mill complex dating to the 1690s. The stone arch bridge carrying SEPTA’s R6 Manayunk/Norristown Line stands just above. Wissahickon Creek tumbles its final fall here en route to the Schuylkill River, a couple hundred yards downstream | Photo: Bradley Maule

Last week’s single-digit overnight temperatures—and subzero daytime wind chills—are a big reason Philadelphia’s had its coldest February (so far) since 1979. The mercury nudged above 32ºF only long enough to grow the gargantuan icicle under the Columbia Railroad Bridge large enough for its transformation into an amazing ice goddess named Shiva. 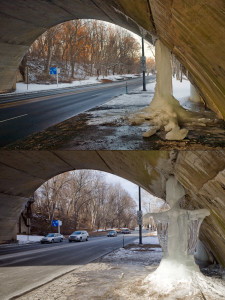 The ice sculptor Don Harrison created the overnight sensation, working through the wee hours of Wednesday till sunup, when Shiva was complete. I had to do a double-take when I saw the sculpture, because only 12 hours earlier, sundown Tuesday, I took an unknowing “before” picture of what was then just an unusually large icicle. I was there because all week long, I’d been shooting photos of the Schuylkill River frozen over, and on this especially cold and clear day, the light was gorgeous on the Columbia and Strawberry Mansion Bridges.

The latter is a little tricky to photograph from the west bank of the river, as there’s a lot of bankside brush and invasive plants like Japanese knotweed. Knotweed is easy to stomp through, though (you can kick it right over), so I ambled down the bank to the river’s edge. Not much for ice fishing, I didn’t come prepared with a proper auger to test the ice’s thickness, but I couldn’t resist taking at least a few steps out onto the frozen Schuylkill. And at this location, Peters Island forms a narrow back channel that surely must be more frozen than the wider whole. I made it out about 10-12 feet before thinking better of continuing. Rather, I came home and tried to rouse up some friends with ropes and life preservers to try again from the same spot on Saturday morning.

This idea didn’t pan out either, so my gal and I came down from the mountain to witness the whiteout, following the lower Wissahickon Creek to its confluence with the Schuylkill River, then following that through Fairmount Park down to the dam and the Water Works. At the Fairmount Dam the sheet of ice gave way to the raging manmade waterfall, the ice sheet resuming below the spillway. But above and below the dam, aside from areas of swift current where the geese and seagulls convened, the Schuylkill was frozen completely over, and Saturday’s blizzard conditions rendered it both completely beautiful and damningly inviting.

At the low end of Boathouse Row just above the dam, a small channel parallel to Waterworks Drive forms a small island made from the decades of sedimentation backup from the dam. Some day, that island might have an Olin-designed footbridge and boardwalk as part of the larger Philadelphia Museum of Art expansion. Until it does, to see the views it affords—of Boathouse Row, of the Water Works, of the skyline, of the river itself—one must somehow get across that back channel. Short of a pair of summertime hip waders, gauging thickness of the ice seems the best bet. I found just the spot on Saturday and scratched my ice hiking itch to get a nice new look at Boathouse Row in the snow.

The photos here survey the seven miles between Ten Box (where Forbidden Drive meets Lincoln Drive in the Wissahickon Valley) and the Fairmount Water Works, all taken in Saturday’s snowstorm.