Though we haven’t yet seen any groundbreaking architectural choices, developers are giving new, large-scale developments more thoughtful, aesthetically-pleasing design than they have had in generations. Construction materials are of higher-quality, façade treatments are more interesting and expressive, and the buildings themselves are increasingly urban-minded, privileging retail uses at street level and deemphasizing parking. Even so, the trend doesn’t hold true for every project. Here we look at five apartment projects that recently broke ground and consider the quality of each one. 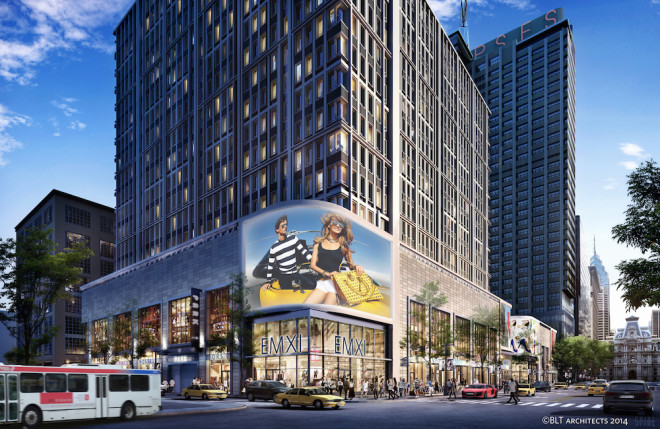 Few projects have been as hyped to being transformative than East Market, a complicated, multi-phase project involving the demolition of the former Snellenburg & Company department store ’s faded, squat aluminum-corniced stump, the renovation of the Snellenburg’s men’s store, and one of the city’s oldest skyscrapers, the Stephen Girard building. Going up where the department store once stood will be two large new retail podiums; one will have a residential tower above and the other will be underpinned to support them. Ludlow Street will be reimagined as a shopping street, while a new pedestrian street, Chestnut Walk, will run through the site from Market to Clover Streets, between the Stephen Girard building and the former Snellenburg men’s store–about halfway been 11th and 12th Streets.

Designed by BLT Architects–the same firm behind 3601 Market and 38Chestnut–the new buildings will both have stonework bases with corner curvature reflecting the PSFS Building’s design across the street. The curving corner then segues into a tower section on the eastern building that, likewise, clearly takes its design cues from its famous neighbor: while utilizing the same kinds of façade treatments as the firm’s University City projects, the massing of the structure is a clear reference to PSFS, with a subtle setback and green roofs on either side of the tower’s bulk. The western structure will be built as just the podium, with future plans for a tower that would be a sister to the eastern one.

What is most notably a departure, however, is that, where a massive floor-to-ceiling window rounds the corner on the PSFS building’s second floor–the former main banking hall–East Market will put landmark digital billboards much like the ones recently installed on the old Lits building, billboards that are also evocative of the ones supposed to go onto the Gallery. Bright lights, including those of the recently approved street ads, will transform Market Street. Time to get used to it.

In some ways the design of this project is like that of a shopping mall (BLT also designed the Gallery). The pedestrian streets–Ludlow Street and Chestnut Walk in Phase I and, potentially, Clover Street in Phase II–will be similar to mall concourses, with new stores littering what will be a heavily commercial block.

BLT’s plans preserve the block’s fine-grained urbanization–a perfect diorama of the city and how it interfaces with smart, new development. Most of the renovated buildings will remain office space, outside of new commercial spaces on the ground floors.

More than just being the most important project on East Market Street in a generation, the East Market project serves as a benchmark and crowning example of what all new developments in the city could and should be.

The Dalian on Fairmount 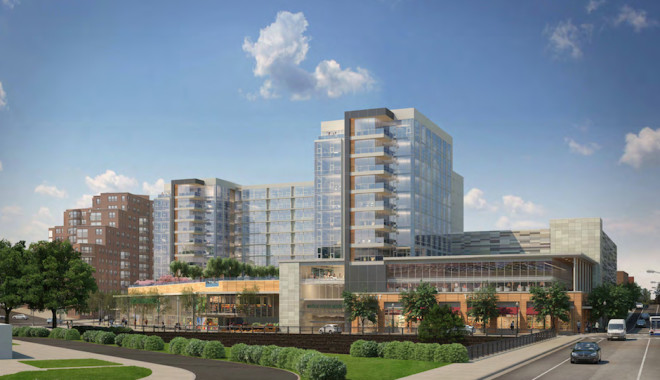 The Dalian on Fairmount is an impressive, thoughtfully-designed new apartment structure going up on the old Best Western hotel site behind the Rodin Museum. The Dalian will complement its high-rise neighbors City View, the apartment and condo buildings lining Pennsylvania Avenue, and Park Towne Place on the other side of the Parkway. It will join the clutch of Parkway-area residential buildings, including the decade-old Tivoli, the impressive new Granary, and the older One Franklin Town and Lofts at Logan View.

Designed by MV + A Architects, the Dalian will occupy nearly the entire block between Spring Garden, Pennsylvania, 21st, and 22nd Streets and will include a massive new Whole Foods on the ground floor. The main bulk the structure is its giant podium; atop it, the tower portion is a zigzaggy, vaguely H-shaped structure whose loftlike design evokes the neighborhood’s industrial past and plays well with the similarly-styled Granary just down the street. Structured parking is to be buried in the middle of the site.

Quite a lot of delicious, valuable space is left open atop that retail podium, and it is here where you can find the Dalian’s tenant amenities: a large pool overlooking the corner of 22nd and Pennsylvania, ample green space, and even a dog run. As much care will be put into the inside of the building–Dalian Development made its name doing high-end projects in D.C., and with rents like what it’ll command, we can expect open floorplans, granite countertops, the works to compliment those enormous, wide-open windows.

A less heralded success is the building’s massing: the tower’s bulk extends all the way up to Spring Garden, further establishing that street as the edge of Center City-like mid-rises. It’s an excellent, no-frills, urban-minded project that, like the Granary, points to the neighborhood’s future. 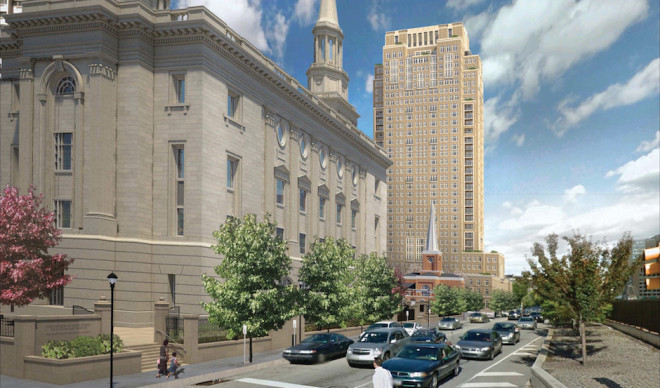 The area around Baldwin Park–once called Franklin Town–is a locus of new projects. 1601 Vine, the Mormons Church’s major apartment proposal at 16th and Vine designed by Robert A.M. Stern Architects, will form the easternmost of this new mid-rise beltway. Notably conservative in appearance, 1601 Vine is the tallest building on this list, though its character is more evocative of a Deco-era commercial building. Some retail space will run along 16th Street, and two short rows of town houses will run along the building’s base on Wood and Vine Streets. Parking will be underground, and accessed via a large–but entirely internal–porte-cochere.

Traditional style is often underappreciated, and the Mormons are known for doing it well. This structure, once complete, is meant to feel like it’s always been there–an impressive limestone edifice marking Center City’s northern edge. 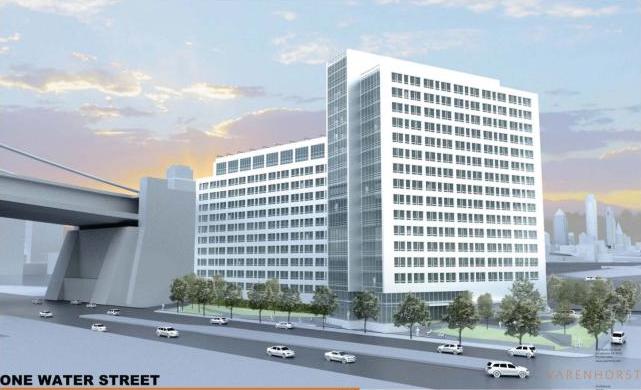 Problematic in terms of design is PMC Property Group’s One Water Street, which will occupy the empty block between Columbus Boulevard, Water Street, Vine Street, and the Benjamin Franklin Bridge’s stony abutment. The architectural firm Varenhorst utilizes the same aluminum-façade system as the tower portion of 2040 Market Street and the architecturally less successful 1900 Arch. Some slack must be given, though. Properties along Columbus Boulevard have notable constraints. The high water table necessitates structured parking, as does the fact that this property is relatively far from public transit and most urban amenities. Flood mitigation–the site lies in the floodplain–requires the structure be elevated above the street to a fair degree. The desire for an active, mixed-use future for the waterfront runs into the fact that there is very little of it there right now, thus significant compromises have to be made. It’s impossible to get away from raising the base of the building ten feet or so, for example. In the final site plans, these spaces–to be used for residents’ amenities–are intended to eventually be converted into commercial spaces once Columbus becomes a full-fledged urban boulevard.

Compromises must be made for unavoidable limitations, but why in this case is there a giant porte-cochere on the Vine Street side? Why is the structure inordinately set back to accommodate it? Why couldn’t this entrance have been put on the Water Street side?

The challenges of the site are such that many of these design compromises can be forgiven. The fact that it looks like it would be more at home on Wilmington, Delaware’s cold Christiana River waterfront, however, cannot. 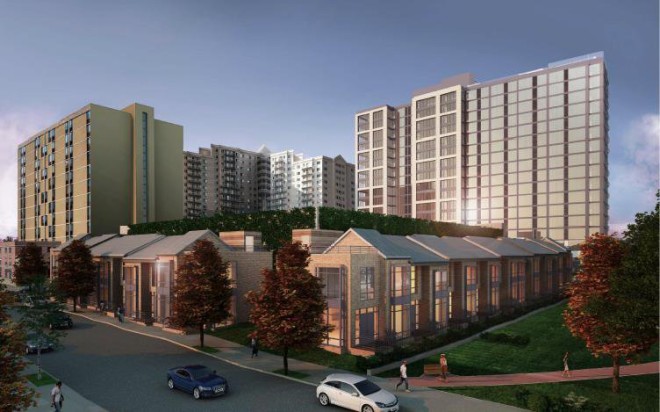 Museum Towers I was built a little over twenty years ago when Philly was far less pleasant a place, and the neighborhood north of Spring Garden was still rough around the edges. Certain sacrifices had to be made to make the project work. Judging by the rather dated, stuccoed façade, good design was traded off for functionality. The building’s large parking lot, created in the urban-renewal era, was essentially reserved as a land bank for a future phase.

Well, Forest City is finally developing that parking lot. The site plan by Perkins Eastman Architects is deceptively simple. An elongated apartment tower will face 18th Street, across the street from the Community College. A deck behind the structure will provide all the Museum Towers’ parking needs. Wrapping around the garage will be two blocks of row houses: one facing 19th, across the street from the low-slung set-back Hamilton Townhouses and the other, facing Baldwin Park–a nice, but underutilized square in the heart of the “Franklin Town” district.

It’s a great location for a project of this size, but I have sincere doubts about the design choices. Pearl Properties’ Granary is just a block away, and has successfully demonstrated that parking in this neighborhood can be sunken below street level. The same goes with 1601 Vine, which will be just a couple of blocks away and on far less desirable parcel. Forest City, the company that undertook the herculean project of decking the Hudson Yards in Manhattan, clearly has enough resources to develop a seamless urban site plan, so why isn’t parking sunken on this high-ground parcel? Also, is seems illogical that there will be no commercial fronting on Baldwin Park, which is right off of Spring Garden Street, one of the city’s busier corridors.

The overall design is starkly uninspiring and fits perfectly with the 30-year-old Tower I. The poor functional and aesthetic choices indicate that profit is the bottom line for the developer, who wants to create the illusion of caring about how the property fits in while offering what may be the most backward apartment complex the city will see this entire decade. The worst of it is, there are plenty of examples nearby of how it can, and should, be done better.