The 30th Street District Plan Is Attractive, Ambitious, And Complicated 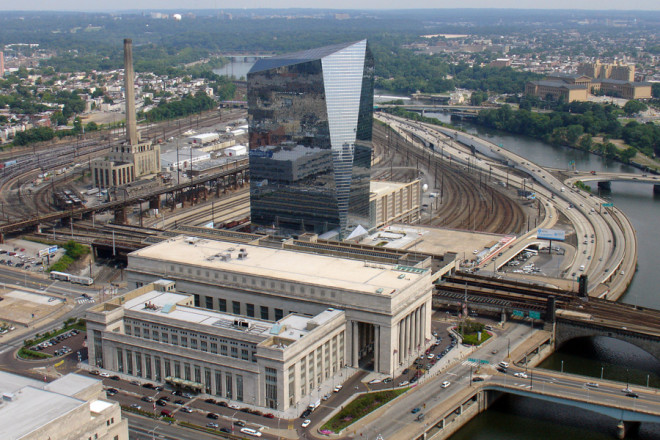 Summer 2006 aerial view of the station and rail yards (and Cira Centre) prior to the demolition of the Drexel Shaft | Photo: Bradley Maule

Partners of the 30th Street Station District Plan recently held an open house to officiate their ambitious plan to redesign the area surrounding the grand railway landmark. The 30th Street District, a collaboration between Drexel University, SEPTA, Amtrak, and Brandywine Realty Trust aims to develop a lasting vision for the area and to construct a viable plan for long-term infrastructure redevelopment. While the station’s name may have legally changed, as Hidden City Daily co-editor Bradley Maule reported last week, it remains a major gateway linking Center City to West Philadelphia that has been begging for an overhaul for decades.

Development of the Powelton and Penn Coach Yards is the project’s long-term goal–a vision whose most recent incarnation was originally articulated in the Drexel Innovation Neighborhood master plan. The plan will require vigorous planning and considerable public outreach. Amtrak’s Natalie Shieh, project manager over 30th Street District’s wide array of agencies, institutions, and consultants, pointed out at the open house that the ultimate goal of the plan is to serve “everyone’s needs all season long, day and night.” This includes the commuters who use the station every day, bustling to offices and classrooms throughout University City, and the people that live within the station proximity.

The lead consultant on the project is Skidmore, Owings, and Merrill. Parsons Brinckerhoff will be doing the engineering work, and OLIN Partners will attend to the landscape design. OLIN’s inclusion points to the importance of landscape architecture in the planning process. “We’re looking to build on the Porch’s success, find out what we need to make the Porch 2.0, 3.0,” noted Amtrak spokeswoman Danelle Hunter at the open house. Much of the Porch’s success stems from it being a programmed, landscaped space that was inexpensive and incremental.

30th Street Station is the hub of University City, the transportation nexus that links the universities, the Science Center, developments along the Schuylkill, and neighborhoods like Powelton Village. Michael Miller of OLIN Partners pointed out at the open house that “the blocks are long and the streets are wide” and that’s the reason why they are “looking for a template for good urbanism.” 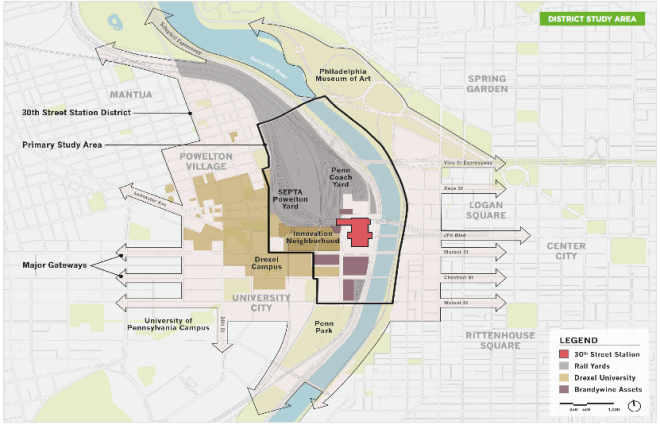 The District’s greatest underlying challenge is the need to put a whole new layer of framework over active transportation infrastructure that is owned and maintained by a host of corporations and agencies, namely SEPTA, Amtrak, CSX and PennDOT. The CSX trestle would be a perfect place for Drexel to put a park, but the cost of diverting freight operations would be a significant bypass with a stupendous price tag. SEPTA breaks connectivity in the District’s plan and the only way to deal with it would be another underground station that would require a new tunnel beneath the Schuylkill River. It appears that the only viable solution to overcoming these limitations is a redesign of the Schuylkill-Vine interchange, a project that could take decades to complete with an enormous price tag on par with decking the rail yards.

It is this messy reality that the design team faces. It is not insurmountable, but the resources necessary to realize the plan are going to be deep and this will limit how much time and resources the partners of the 30th Street Station District will want to spend altering starting conditions. It’s very likely that cost and excessive design tinkering will take decking the railyards–the District’s whole raison d’être–out of the realm of viability and this will make the planners’ jobs that much tougher.