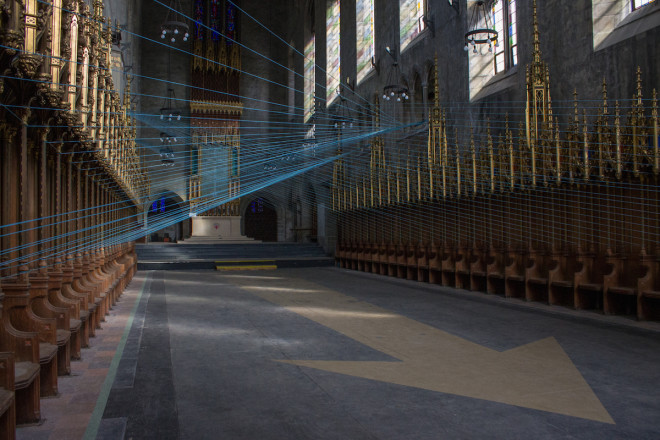 Editor’s Note: This Saturday, Aaron Asis will activate the vacant, Gothic Revival grandeur of St. Andrew’s Collegiate Chapel in Spruce Hill with a three day, three weekend only site-specific art installation, Ci-Lines. The temporary project, a geometric web of electric blue parachute tethering, weaves the ecclesiastical ornamentation and inner architecture of the vast, empty sanctuary into a web of spatial connectivity and prism-like, segmented observation points. The Brooklyn-based built environment artist collaborated on the installation with fifth-graders from the Penn Alexander School.

With Ci-Lines, Asis hopes to spark renewed interest in the vacant sanctuary to ensure its preservation and future as an enduring neighborhood landmark. The chapel was built in 1924 and belonged the Philadelphia Divinity School, founded in 1857 to educate Episcopalian priests. Designed by Zantzinger, Borie and Medary, it was used for sermon lessons and school services until 1974 when the school closed and was absorbed by its counterpart Episcopal Divinity School in Cambridge, Massachusetts. University City Associates purchased the buildings and property in 1977. The multi-building campus is currently home to the Parent Infant Center and the Philadelphia Writing Project, though the chapel remains vacant and unused.

Michael Bixler: In your artist’s statement you say that you seek to draw connections between people and their built environs. How does the geometry of Ci-Lines and its relation to St. Andrew’s Chapel’s architectural form and its vacancy factor into this goal?

Aaron Asis: The geometry of Ci-Lines is like an artistic exercise in connecting the dots, crisscrossing overhead and inviting visitors to visually explore a sculptural form as a portal into the nuances of a vacant environ. The resultant series of cords in tension draws direct inspiration from the existing architectural form inside the chapel. These cords literally render a woven and symmetrical connection between the ornamental posts lining the chapel walls and architectural columns featured along the balconies above, combining to act as a temporary catalyst for observation, investigation, conversation, and realization of spatial majesty in vacant context.

Though, the primary project goal was to conceive of a project that would create an opportunity for members of the Philadelphia community to temporarily occupy the vacant volume inside St. Andrews. As a result, Ci-Lines is deliberately visible and invisible at the same time, much in the same way vacant buildings are often perceived throughout our everyday urban landscape; as under-appreciate community icons, rich with memories of past and realities of the present.

The collective worth of vacant and/or abandoned spaces should not be limited to mere acceptance of abandonment. These spaces are often rich in texture and history that combine to create these truly unique spatial environments. That said, selective activation of vacant and/or abandoned spaces with artwork creates real opportunities for temporary occupation of these spaces. Through occupation, spatial installations that draw connections between people and their built environs can facilitate exposure to alternative histories, spatial expectations, and interior sensations, all in the name of increased awareness of space, place and circumstance.

MB: How did collaborating with the Penn Alexander School class come about and what was their contribution? What were the children’s response to the project?

AA: The project was actually initially designed for the entry atrium at the Penn-Alexander School, and so student collaboration was always and naturally considered part of this project. However, as the project evolved and the opportunity to work inside the vacant St Andrew’s chapel (a property affiliated with the Penn-Alexander School) presented itself, the choice was very clear. The installation needed to take place in the chapel and provisions for student access and participation were coordinated.

Again, temporary chapel occupation and access was always primary. During the installation, several classes of Penn-Alexander 5th graders were invited into the church and collectively asked to identify anything they deemed significant, interesting, or unexpected inside the chapel’s interior. Then, smaller groups of students were individually asked to present their own ideas about specific pieces of the installation that had yet to be resolved. All in all, the student reactions covered the spectrum, from specific chapel observations to constructive installation suggestions, of which several student ideas will be incorporated into the finalization of the installation.

MB: How did you decide on St. Andrew’s? Any future plans to activate other vacant structures in Philly with your installation work?

AA: Truth be told, the decision to create Ci-Lines inside St. Andrew’s was accidental. It was the result of a working conversation, regarding how this project could be realized in the Penn-Alexander atrium. But once the idea for St. Andrews was floated, all the pieces fell into place. Unfortunately, I do not have any current plans to activate other vacant structures in Philadelphia, but will be fast to seek out new opportunities. Any excuse to temporarily occupy these structures helps to preserve the legacy of these community icons for years to come. It influences our collective memories and inspires our child-like enthusiasm.

An intimate view inside Ci-Lines. Photographs by Michael Bixler 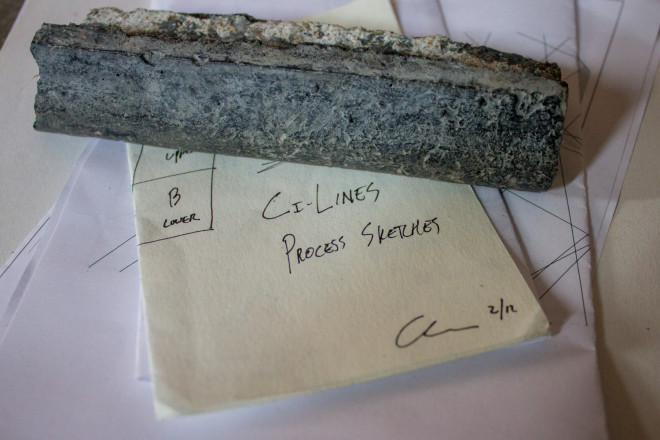 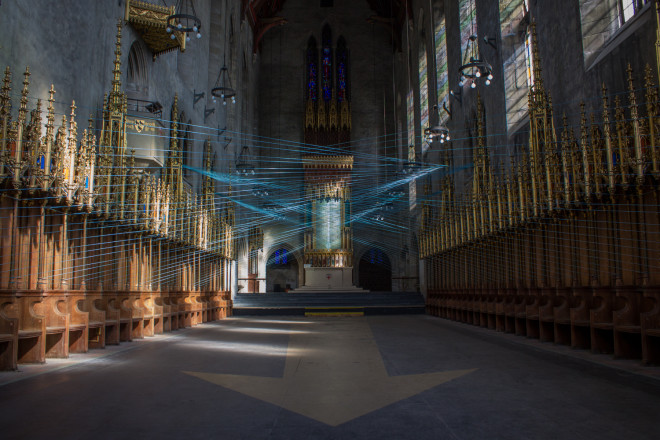 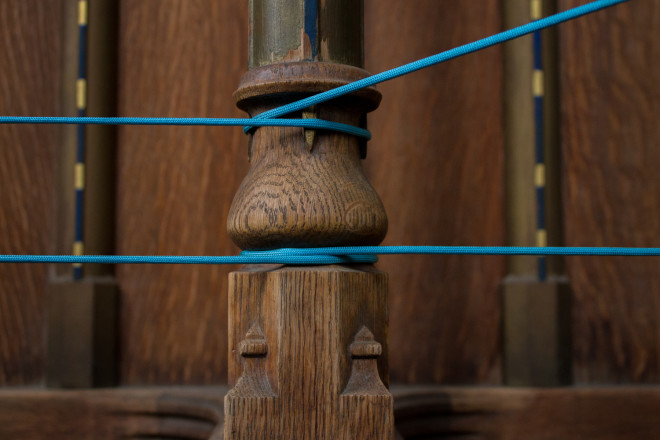 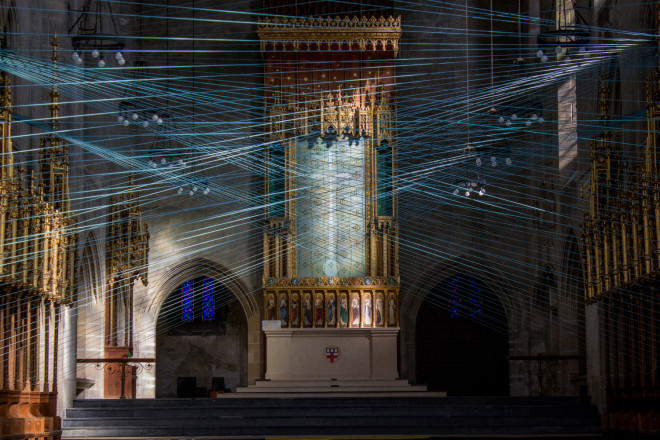 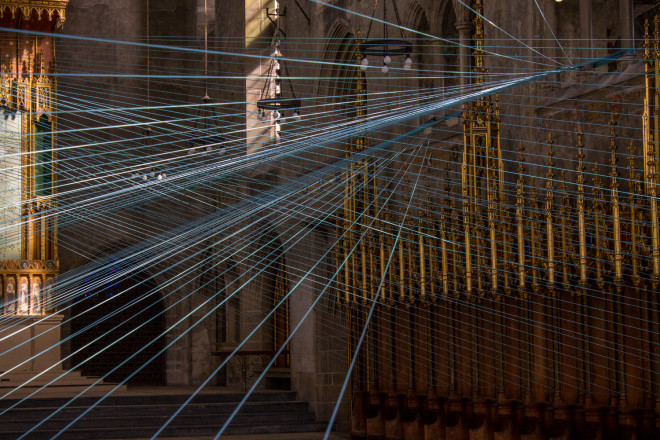 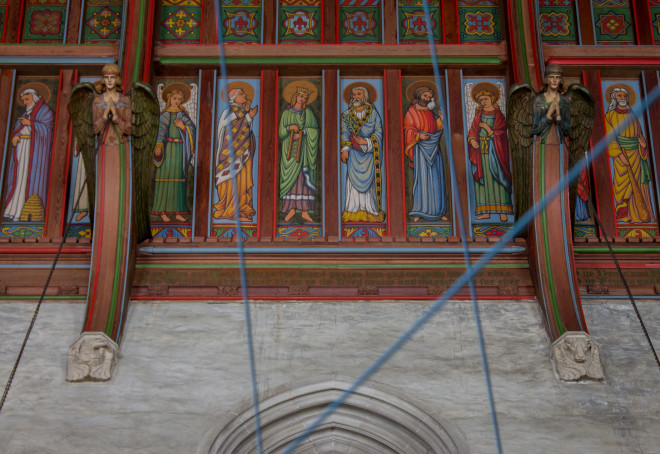 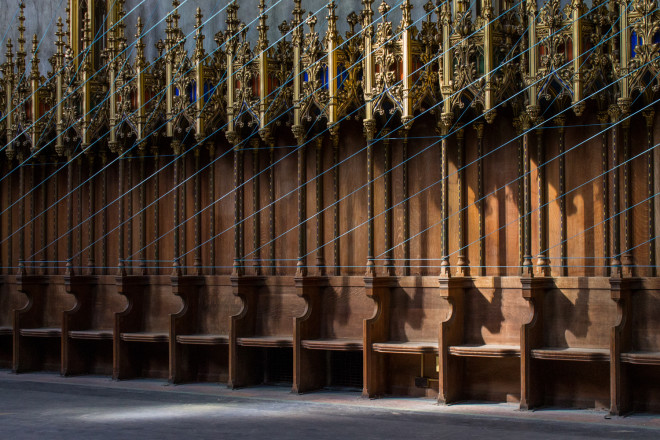 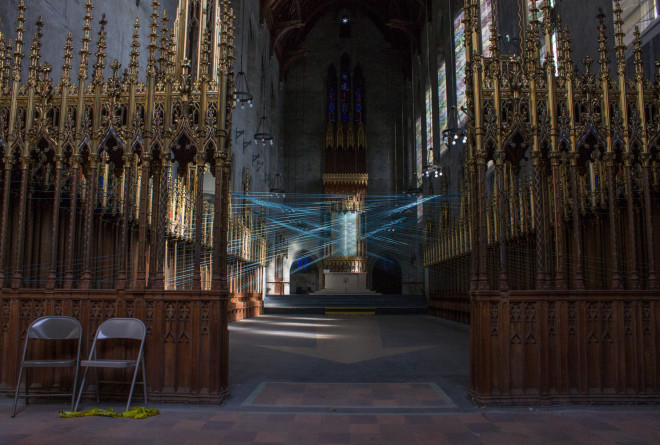 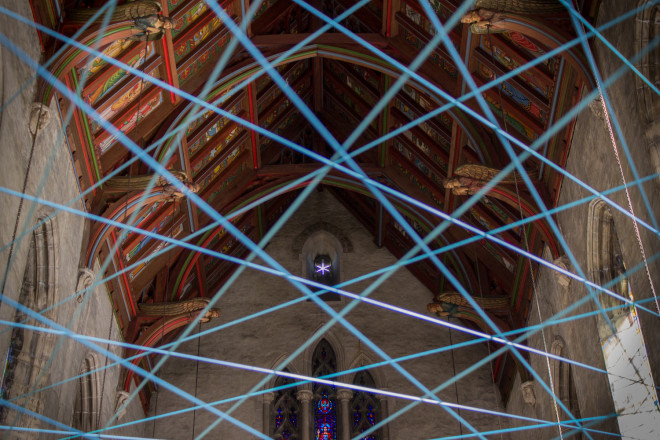 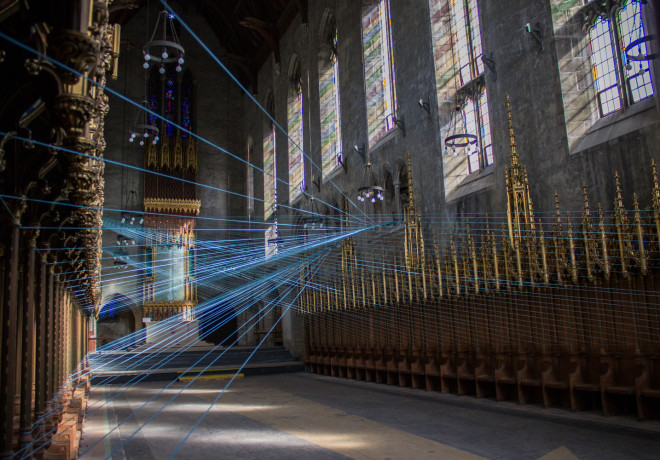 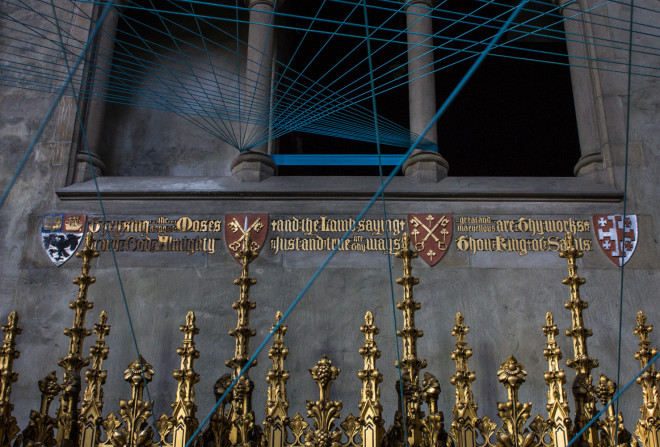 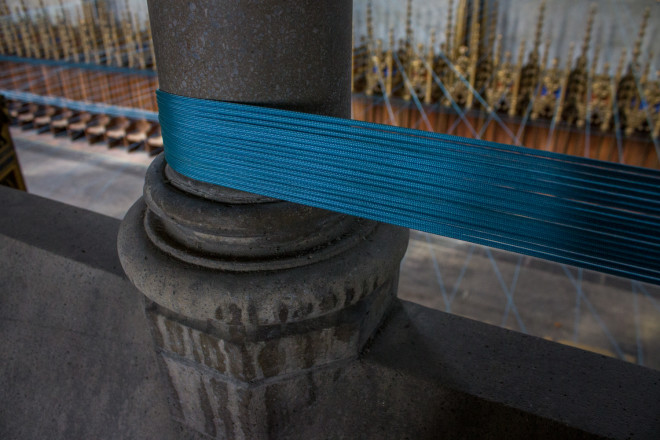 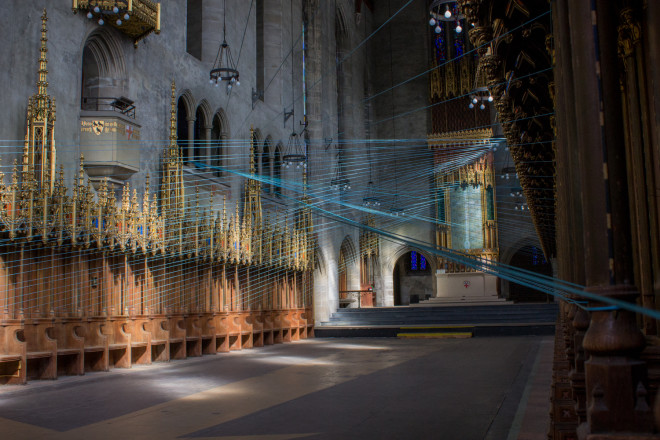 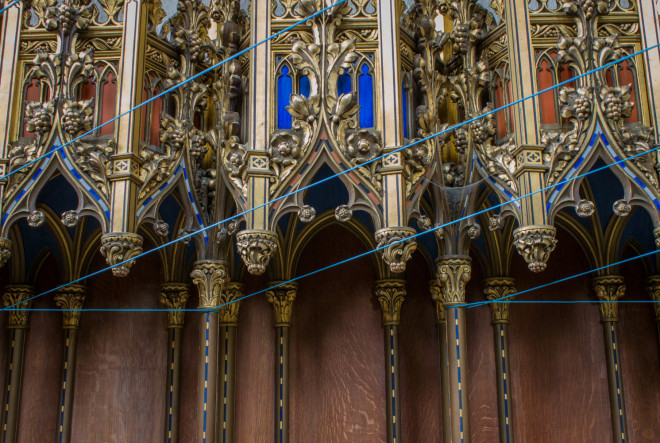 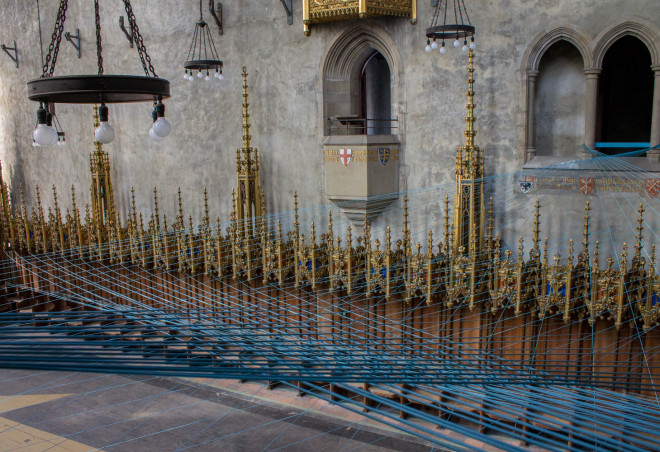