Of Junk Mail And Murder: The Busy Life Of The Miles Building 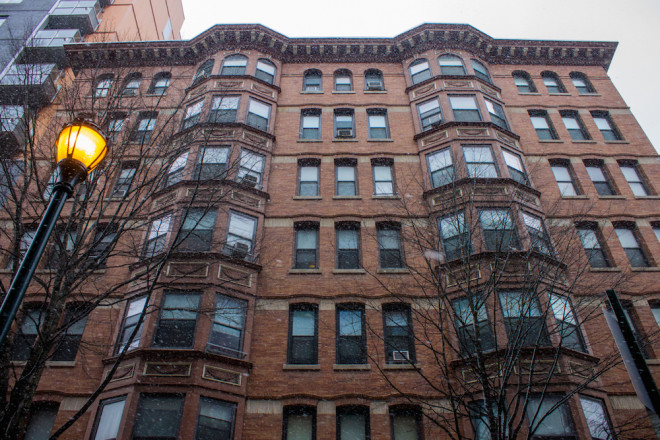 The seven-story Miles building in the heart of Washington Square West has always fascinated me. It’s a survivor from the era when the mostly residential neighborhood was littered with industrial buildings; it radiates a certain spirit of pride and accomplishment. The design is classy and dignified for a utilitarian building. The 11th Street facade has three sets of three bays of windows divided by two sets of cast iron bay windows, the top row of windows are arched, and the facade is clad with different shades of thin, light brown bricks made by the Tiffany Enameled Brick Company. After 115 years on 11th Street–with a laundry list of past tenants and a double dose of scandal–the Miles Building still stands with unshakeable grace.

Miles is the culmination of a series of events that began in 1818, when Jacob Miles started a small leather shoe business in Philadelphia. His son Thomas join the company at 11 years old in 1838. The company operated under the name Miles & Sons until Jacob’s death in 1865. Thomas took over and included his son John in on the business, renaming the operation Thomas Miles & Son. Thomas Miles retired from the shoe business in 1879 and handed it over to John and his other son, Thomas H. Miles, who then changed the company name to T. Miles Sons. After John’s death in 1888–which has been immortalized by the U.S. Supreme Court Case Miles v. Connecticut Mutual Life Insurance Company–the name changed to Thomas H. Miles. The company’s final store location at 23 South 11th Street went on to house the famous Philly jazz club, Downbeat, which still stands today with a jewelry store occupying the old storefront.

Miles In The Making

In 1899, Thomas Miles Sr. speculated on the 95′ x 90′ site of an old horse stable–at the southwest corner of what was then 11th and Zenobia Streets–for a six-story, $38,455 factory building that would take on the family name: the Miles Building. Miles commissioned Charles Balderston as architect and awarded W.W. Rea’s and Sons the construction contract. Construction was swift, but many changes took place to both the design of the building and the geography of the city during that time. By the end of 1900 the building was finished and ended up with an extra floor, bringing it up to seven stories and 91 feet high. The street address had changed from 206-214 South 11th to 218-226 South 11th and Zenobia Street was renamed Saint James. 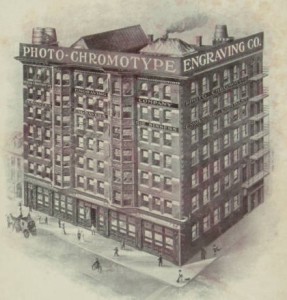 Engraving of the Miles Building when it was first completed | Source: [Photo-Chromotype Engraving Company sales brochure] [1900] In the David A. Hanson Collection. The Sterling and Francine Clark Art Institute Library

The then-fledgling General Electric Company’s new Philadelphia office was the building’s first primary tenant, though the Photo-Chromotype Engraving Company dominated the exterior with a massive sign that ran along the top of the building’s ornate cornice. These two tenants held the building for most of its first decade. 1907 was a busy year for the building. It suffered three separate fires, changed ownership after the death of Thomas Miles–who left the building to Thomas H. Miles and his two daughters–General Electric moved out, and the building was incorporated into Philadelphia’s vast printing and publishing industry of the era.

Both the NYC-based Harper & Brothers Company and the famous children’s book and magazine printer, Penn Publishing, took over the building at different times until 1920, when the Charles Paist Company turned the Miles Building into what was essentially a junk mail factory. Charles Paist Jr. was famous for producing the best direct mail advertising in the country and for having the most accurate mailing lists that could target just the right customers. The company dominated the Miles Building for all of the 1920s.

The Miles Buildings changed lives yet again in the 1930s, housing both Angelo Conolla’s restaurant equipment distributor and the offices of the Novelty Wig Company. The building’s next tenants were a long series of textile businesses that concurrently used different parts of the building into the late 1970s–the M & M Macar Clothing Company changed the name of the building to the Macar Building. In 1977, Jefferson Hospital proposed converting the old factory into a nursing home, but this plan never panned out. 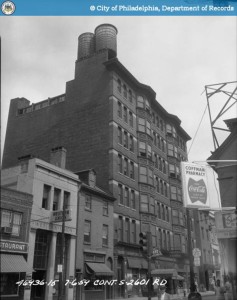 By the 1980s, the building was on its last legs. The facade was dirty and the upper floors were too antiquated to support any type of use. The building joined a series of buildings under the name Washington West Properties in 1981 and was converted into affordable Section 8 apartments under the designs of local architects Baker, Rothschild, Horn, Blyth. It was re-opened in November, 1982 and still serves as affordable housing today, managed by the Apartment Investment and Management Company (Aimco).

In 2013, the Miles Building made headlines when a Northeast Philadelphia resident was allegedly dismembered in the bathtub of apartment #26 after being robbed in a prostitution incident.

The street-level space of the Miles Building began as a sales office for the General Electric Company and later became storefronts selling the items being produced in the upper floors. In the 1940s, the first floor was split into three retail spaces. In the 1950s, the storefront at 224 South 11th housed a series of seedy bars. One of them, the Equator Bar, was mentioned in a Congressional Report in 1954 that described the spread of juvenile delinquency. Five teenagers were found to be drunk and dancing in the establishment during a random check by the subcommittee.

One storefront at 218 South 11th was a well-known radio and television parts store named Eugene G. Wiles. It lasted the entire 1950s and 60s and eventually expanded into the space at 220 South 11th. 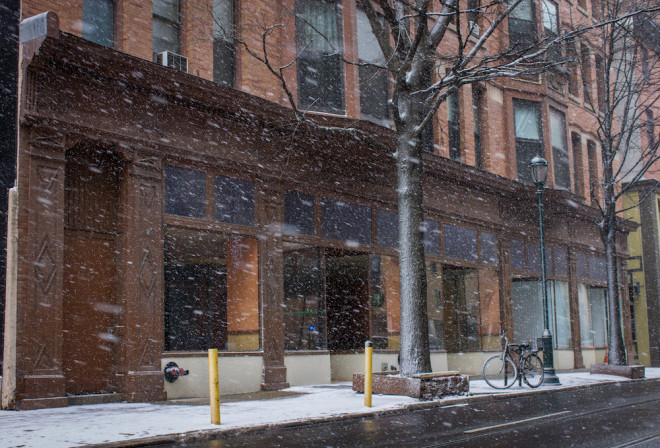 From seedy bars to Saladworks: the storefronts of the Miles Building are quiet and empty on a recent snowy day | Photo: Michael Bixler

When the Miles Building was rehabbed in 1981 and 1982, the storefronts were also re-activated. A Jefferson University book store, a deli named Philly Gourmet, and a watch repair stand were the first to occupy the street level in the building’s modern era. The storefronts at 218 and 220 were later consolidated to serve as a lobby for the apartment building and in 2004 Saladworks opened in the remaining space. The restaurant closed its doors a few months ago and the space has sat empty without a “For Lease” sign or any indication of a future tenant. Nearby neighbors are hopeful that the space will soon be filled with another long-term occupant.