Gears Are In Motion For Philadelphia’s New Bike Share, But Are We Prepared? 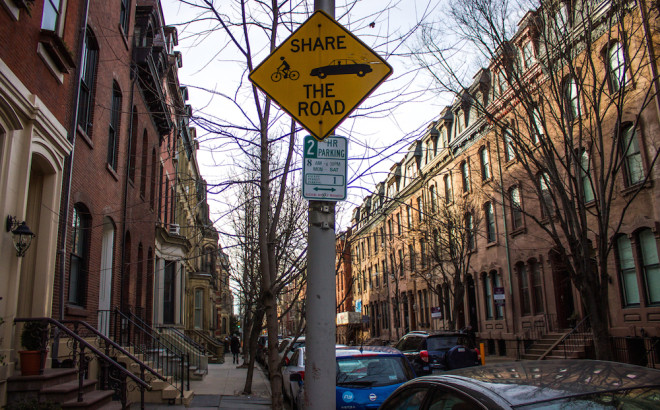 Safety in numbers: With more inexperienced cyclists on the road using Philadelphia Bike Share will motorists slow down and oblige? | Photo: Michael Bixler

The Philadelphia Bike Share program “Indego” is slated to roll out this spring and enthusiasm is high. Indego will have approximately 13 stations per square mile, nearly double than its peers in Washington D.C., Boston, and Chicago, according to the Philadelphia Bike Share Strategic Business Plan Highlights report. It’s a forward-thinking and highly-anticipated project, but with the coming influx of inexperienced cyclists, will our dodgy street conditions, the lack of protected bike lanes, and negligible bike-friendly infrastructure safety support the program?

The first phase of Indego will include 600 bicycles and 60 strategically located stations within the city where bikes can be rented and returned. “It’s a lot, but it’s also not that much,” says Andrew Stober, chief of staff for the Mayor’s Office of Transportation and Utilities. Stober calls the plan’s opening phase a “meaningful number.” Philadelphia is the last of the big cities in the United States to launch a bike share. Stober says the most comparable network is Washington D.C., which activated in 2013. 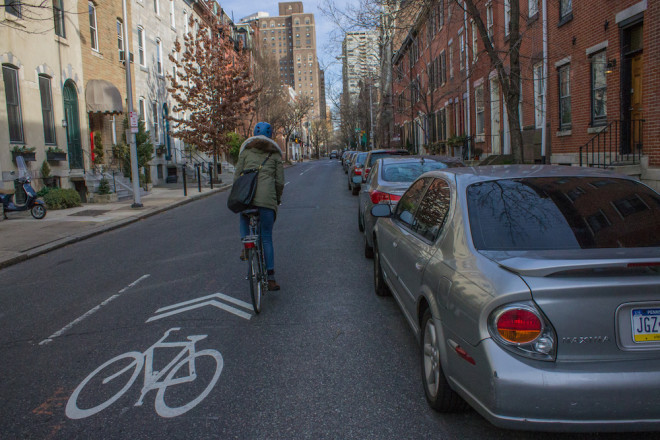 Protected lanes would be nice, but for now these (mostly ineffective) road signs will have to do | Photo: Michael Bixler

The program is projected to increase annual ridership from the current figure of around 500,000 to 2.5 million between now and 2020, according to the City of Philadelphia’s 2013 Bike Share Strategic Business Plan Highlights report. “They expect 200,000 casual users, 6,000 riders a day, with up to 2,500,000 trips per years,” says Kathleen Grady, director at the Office of Sustainability at Temple University. “The average ride would be one to three miles and last 15 to 20 minutes.”

“We’re getting in late, but we’re getting a good system,” says Alex Doty, executive director of the Bicycle Coalition of Greater Philadelphia. The Bicycle Coalition is one several community organizations to partner with the City in an outreach network called Better Bike Share. “The City is doing a good of job of taking advantage of other cities to learn from them,” says Doty. “I think the system is well funded.” 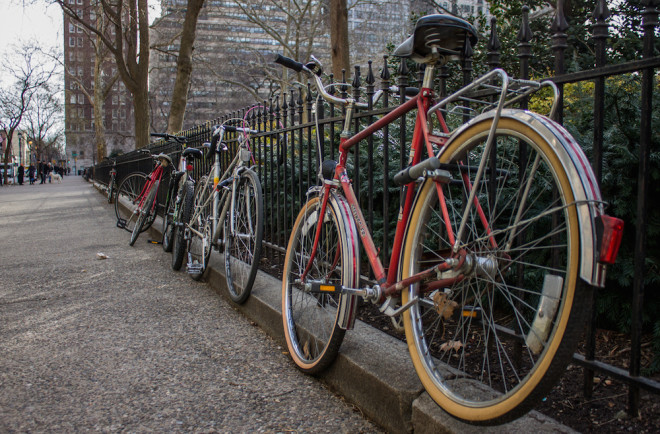 Rittenhouse Square: a well-traveled park in the heart of the city with nary a bike rack | Photo: Michael Bixler

Thus far, the bike share cost has been $3 million in city capital funds. The City leveraged an additional $2.5 million in state and federal capital funds and a $8.5 million title sponsorship from Independence Blue Cross–hence the name–to roll out Indego.

Doty says that Philadelphia will have a higher density of system than other bicycle shares have had in their launch. “We have more bicycle riders per capita than any other big city in the United States.” Bicycling in Philadelphia grew 260 percent in Philadelphia between 2005 and 2013. “It’s doubled and doubled again, almost tripled,” says Doty.

Philadelphia currently has over 400 miles of bicycle lanes. NewsWorks recently reported that bicycle lanes increased by 13-percent during Mayor Nutter’s tenure. “These are not expensive investments,” says Stober. He also cites the $17 million Tiger Grant that went toward building the 2,000-foot Schuylkill Banks Boardwalk, effectively bridging several bicycle trail ways that give cyclists a more comprehensive system with multiple access points to navigate the city. “We’ve transformed what was a recreational path to a transportation network,” says Stober. 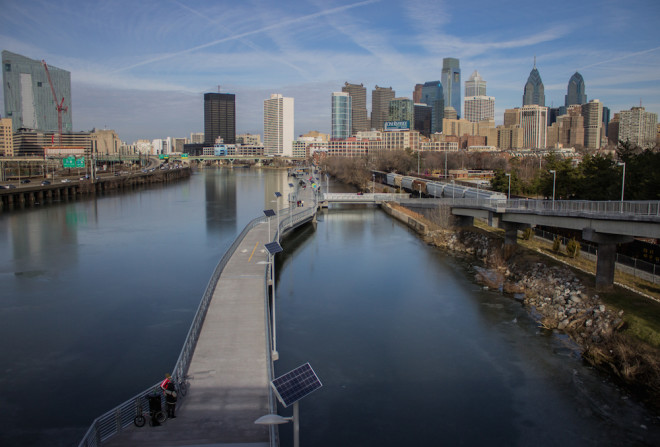 Protection is a consideration and Doty would ultimately like to see physically separated bicycle lanes in the future, but for now he believes that Indego will be a net plus for biker safety and visibility. He says that other US cities with worse infrastructure than Philadelphia are experiencing increases in bicycle commuters, while the number of crashes stay the same. “More volume per riders per trip, that is a reduction in crashes per trip,”says Doty.

Though, concerns for safety seem relative. Making sure Indego is useful on a daily basis for it to be effective and successful appears to be the foremost test. “The biggest challenge is the system needs to work,” he says. “There are going to be hiccups. Things will go wrong. But if they become systemic, bike share will not function.” 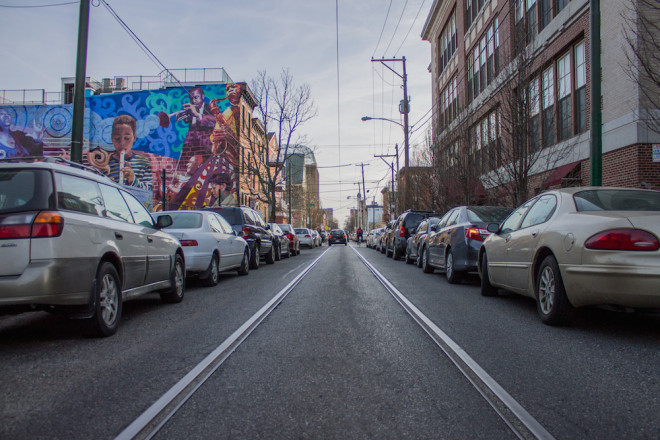 Katie Monroe, outreach manager for the Bicycle Coalition’s Better Bike Share initiative, says Philadelphians have historically lacked bicycle access and making the program’s presence known is a primary goal. “I think the biggest challenge is people don’t have the resources to get started or know where to look,” says Monroe. Though, she says the biggest barrier is that people are simply afraid to ride. The Better Bike Share program leads community bike rides as part of its outreach to acclimate more city dwellers to experience the city on two wheels. “You don’t need to wear spandex to go two miles to work. Not everyone knows that. There’s not a lot of common shared knowledge,” says Monroe.

Indego also strives to be the most equitable. More than half of all Philadelphia residents living below the poverty live within the Bike Share’s coverage area. 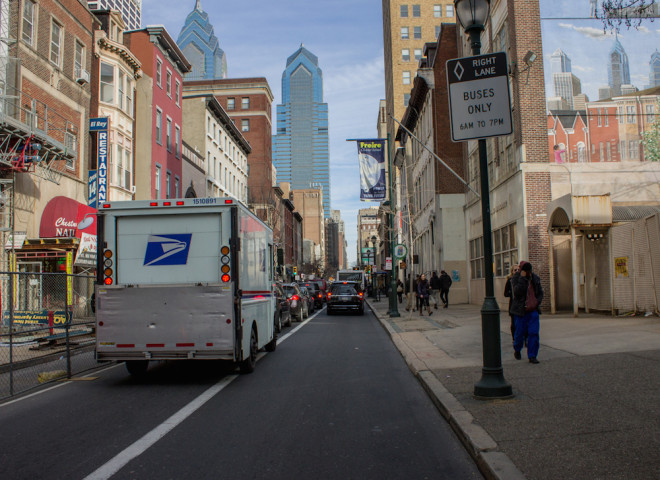 Biking on Chestnut Street in Center City can be a near-death experience | Photo: Michael Bixler

Dan Garofalo, environmental sustainability director at the University of Pennsylvania, says Penn is committed to hosting three Indego stations on campus. Up to 100 new bike racks will also be added per year in addition to the sixty-plus bike racks that are already on campus. But Garofalo says calculating and quantifying the biking habits at Penn to garner an idea of the potential interest in using a bike share is complicated. “It’s very difficulty to get a survey of who is using our bike racks,” he says. “Bikers are famously independent, and the number goes up really high in nice weather.”

At Temple, Grady says the university will focus on educating its ambassadors and staff over the summer in time for the influx of new students come fall semester. Educating students on how to navigate an urban landscape on bike is key, says Grady. “One of the things we’re concerned about is folks new to the city and getting on to bikes. We want to make sure that they know how to bike in the city,” she says. Temple also plans to continue its outreach program to nearby communities and organizations and plans to double the number of back racks on campus, which currently stands at 1,700. 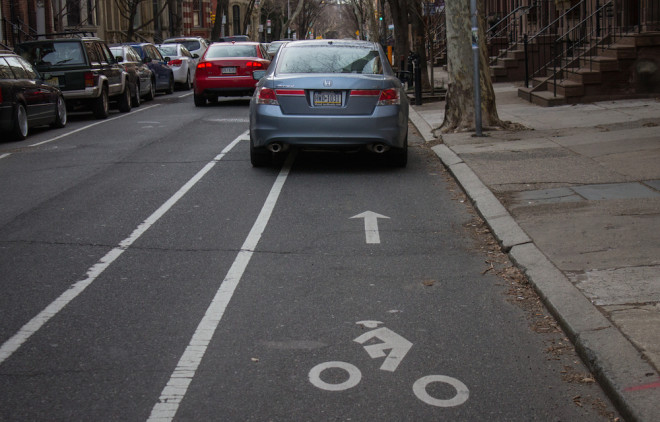 “Bike lane? What bike lane?” Illegal parking is an all too common occurrence on Spruce Street | Photo: Michael Bixler