Focusing On The Petty 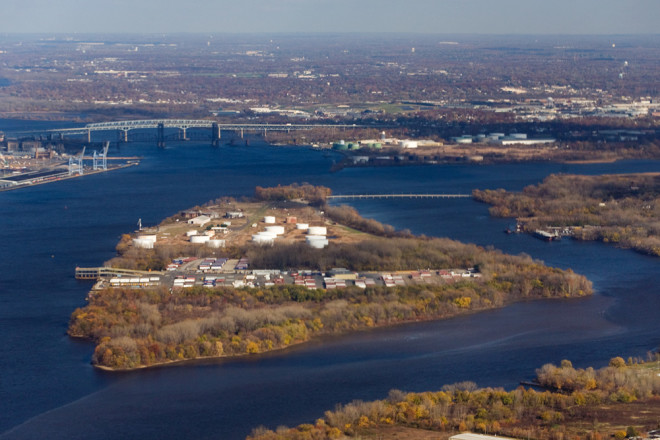 Captain Blackbeard, whales, the slave trade, Quaker duels, Ben Franklin, Lenni-Lenape and Susquehannock, Hugo Chavez, Jon Corzine, the oil industry . . . the historical roll call at Petty’s Island is wild and disjointed, yet outside the employees of the Citgo and Crowley corporations, few of us have ever set foot on the 300-acre island less than a mile from the shores of Fishtown. That will change starting in 2020, when the New Jersey Natural Lands Trust takes ownership of the island. Exactly how that will look is still at least five years away, but this year’s competitors in the Better Philadelphia Challenge (formerly the Ed Bacon Student Urban Design Competition) took a stab at envisioning it. The winning team will receive its $5,000 prize at tomorrow night’s Ed Bacon Awards Ceremony.

Contestants were encouraged to imagine Petty’s Island with considerations for best use of the land, transportation and access to it, and given its known future as a preserve, environmental stewardship and planning for climate change. And they took note of its geographic relationship to Pennsauken, of which it is technically part, Camden, and Philadelphia. But the study area wasn’t limited to the island itself. Directly across the Delaware River and running nearly parallel to the length of the island, Philadelphia has 220 acres of unused riverfront land of its own. Just north of Penn Treaty Park and PECO’s Delaware Station, the former Cramp Shipyard grounds (site of the failed Wynn casino proposal) and Philadelphia & Reading Railroad Port Richmond yards (site of the “Graffiti Pier”) comprise a vast swath of contiguous land begging for rebirth. At least on paper, the 2015 Better Philadelphia Challenge will bring these communities and opportunities together.

The other portion of the evening will honor this year’s recipient of the Ed Bacon Prize, Judith Rodin. In 1994, Rodin was the first woman to head an Ivy League school when she became President of the University of Pennsylvania. (Her successor, Amy Gutmann, took over when Rodin left the position in 2004.) Since 2005, Rodin has been the president of the Rockefeller Foundation, one of New York’s largest philanthropic organizations, and last year, she authored The Resilience Dividend: Being Strong in a World Where Things Go Wrong, a book that looks at how cities think and adapt to modern and future challenges like climate change.