At Liberty Place, The Ghost Of Hot Jazz 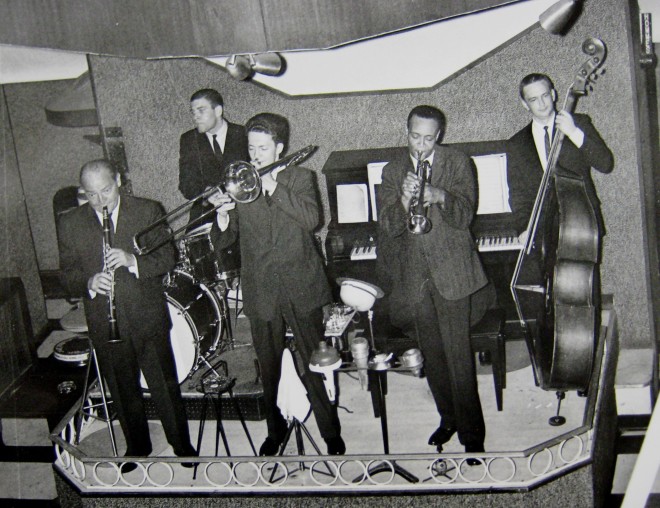 Billy Krechmer (at left on clarinet) and his band at his club, May 1962 | Courtesy of the George D. McDowell Philadelphia Evening Bulletin Collection, Special Collections Research Center, Temple University Libraries

Author’s Note: I was inspired by a conversation with my mother, Kay, to explore the history of this Ranstead Street jazz club after she read my Hidden City Daily article, “Remembering the Downbeat”. In that piece I noted that the Downbeat’s proprietor, Nat Segall, began his music management career partnering with Billy Krechmer prior to opening his own club on South 11th Street. After reading the piece, my mother exclaimed with surprise, “Billy Krechmer’s! Your father and I used to go there all the time.” Intrigued, I set about researching this once popular, but now long forgotten Philly jazz institution.

Blowin’ Up At Billy’s 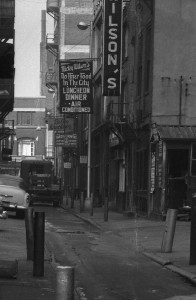 View of Ranstead Street, 1959. (The sign for Billy Krechmer’s is visible in the center of the photo) | Photo courtesy of PhillyHistory.org

When construction began in 1985 on One Liberty Place–the building that notoriously broke City Hall’s longstanding, unofficial height barrier and paved the way for our modern skyline–the 1600 block of Ranstead Street was sacrificed to make way for the new skyscraper. Ranstead Street–essentially an alley running from 16th to 17th Streets between Market and Chestnut Streets–was home to Billy Krechmer’s swing room for over 27 years. When it closed in 1966, Krechmer’s, at 1627 Ranstead, was hailed as the nation’s longest continuously running jazz club.

Wilhelm Frederick “Billy” Krechmer, a classically trained clarinetist who studied at the renowned Curtis Institute of Music, chose the jazz life over a classical career. Born in 1910 in Millville, New Jersey, he toured with some of the popular small jazz bands of the early 1930s before settling in Philadelphia and getting work gigging around town. He was in the house band at the Earle Theatre at 11th and Market Streets when a bout of carpal tunnel syndrome forced him to stop playing in 1938. In November of that year he and a partner, Nat Segall, opened a jazz club at 1627 Ranstead Street called the Jam Session. After several weeks, Segall left to open his own jazz club, the Downbeat, leaving Krechmer as sole proprietor of the Jam Session, which he later renamed after himself. Krechmer’s carpal tunnel eventually improved enough that he could resume playing. From the late 1930s until he closed the club in 1966 he served as both proprietor and leader of the house band.

Over time, Krechmer’s became known as a mecca for Dixieland jazz. Dixieland occupies a strange place in the jazz tradition. It was one of the first distinctive jazz styles to emerge from the musical melting pot of New Orleans around the turn of the twentieth century. Originally an African 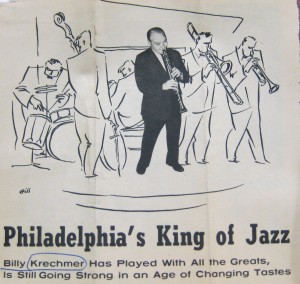 American style, it was quickly adapted by white groups. The first ever jazz recordings were made in 1917 by a white New Orleans group, the Original Dixieland Jazz Band. Dixieland was popular throughout the 1920s, but fell out of favor as a mainstream jazz style with the advent of big band swing in the 1930s. Then, beginning in the late 1940s, there was a Dixieland revival and the style became popular again. The dynamic was different this time, however, for Dixieland was now largely popular white music. Many of the black originators took part in the revival, but since the mid-20th century Dixieland has been a music played primarily by and for whites. Most black jazz fans of the 1950s and 1960s ignored Dixieland, as did jazz critics, who paid virtually no attention to it. To many, the revival seemed more about preserving an archaic style than the continued development of jazz. (The term “Dixieland” has since taken on a pejorative connotation in many circles. Its practitioners generally refer to the style as “Classic Jazz” or “Hot Jazz.”)

Krechmer’s club was known as a swing room in the early years. It was a place where big name jazz stars, regardless of color, would come to jam between sets or after their gigs at the major venues in town. Though, as the Dixieland revival took hold in the 1950s–and jazz began moving in directions that were less appealing to mainstream audiences–Krechmer’s became a bulwark of Dixieland. If you wanted to hear the latest in jazz from Dizzy Gillespie or Miles Davis, you had to go to clubs like Peps or the Showboat. If you wanted to hear Dixieland, you went to Billy Krechmer’s. 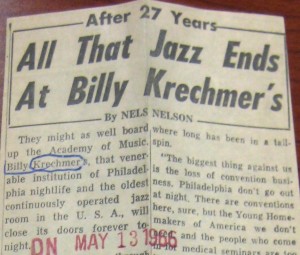 The original Krechmer’s was quite small–11 1/2 feet wide by 52 feet long, with a capacity of about 50 people. It was not a fancy place. In 1959, Krechmer purchased the adjacent property and broke through the walls, doubling the club’s size. He also added balcony seating. The club was very popular in the 1950s and early 1960s, often filled to capacity and attracting well-known players and fans of Dixieland.

By the mid 1960s, a combination of changes in the music business and his recurring problems with carpal tunnel led Billy Krechmer to get out of the jazz club business for good. His last show at the club was May 13, 1966. Shortly thereafter, an 1890s themed club called Your Father’s Mustache opened in the building. This didn’t last long, however, and eventually gave way to a disco club called the Opal Room. Meanwhile, Billy Krechmer moved to Longport, New Jersey, where he continued to play occasionally until the early 1990s. He died in 2002 at the age of 92, some seventeen years after the entire city block surrounding his club had been demolished to make way for One Liberty Place, leaving no trace of his 27 year-old Philly jazz legacy.