A View Of The Bicentennial From The Top Of Penn Mutual 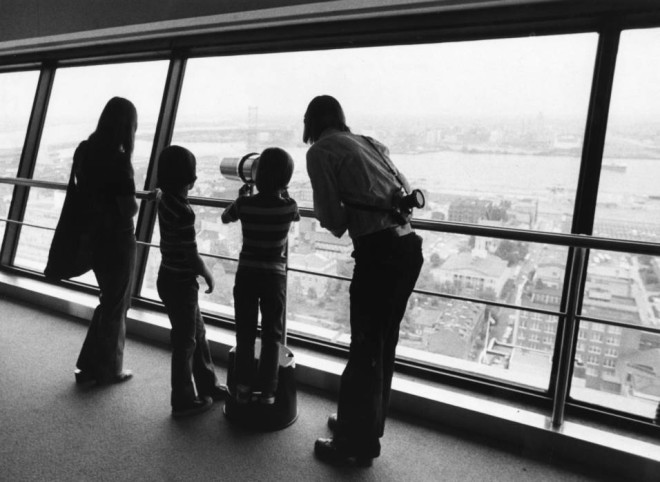 The French firm Montparnasse 56 Group plans to open a public observation deck on the 57th floor of One Liberty Place this summer. The news immediately brought to mind the old public observation deck of the Penn Mutual Life Insurance Company Tower at Sixth and Walnut Streets. Although the enclosed deck at the top of City Hall’s 548-foot tower is better known today, Penn Mutual’s view overlooking Independence Hall–the most historic square mile in the nation–was a full-fledged Philadelphia attraction in its day that enchanted tourists and city dwellers alike for almost 20 years. I took a field trip to the Penn Mutual deck during the Bicentennial in 1976 while attending Baldi Junior High School in Northeast Philadelphia and it left me with an indelible memory of the enduring grandeur of our city. 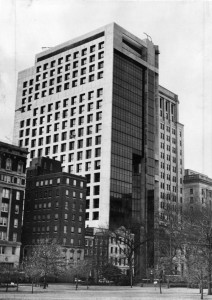 Penn Mutual was founded in 1847. Their headquarters shifted around frequently within Old City and Society Hill. The firm eventually settled into a cast-iron structure at the southeast corner of Sixth and Walnut Streets, about ten years before the Civil War. The location was one block from Independence Hall, naturally inspiring Penn Mutual’s corporate slogan: “Behind Your Independence… Stands the Penn Mutual.” The company eventually replaced its HQ with  a ten-story structure designed by Edgar Viguers Seeler.

An addition was added to the structure’s east side in the early 1930s. The add-on and the older structure came close to demolition in the 1950s when plans for Independence National Historical Park were beginning to materialize. The park’s designers didn’t fancy Independence Hall being framed against the dark background of these two 20th century buildings, though they managed to survive.

A glass and concrete tower designed by Mitchell/Giurgola Associates completed the Penn Mutual compound in the early 1970s. The 375-foot tower at 510 Walnut Street displayed Guirgola’s fascination with the intersection of glass curtain walls and concrete surfaces and won an American Institute of Architects Honor Award in 1977. The redesign of the building included the preservation of architect John Haviland’s white marble Egyptian Revival façade–the remains of the Pennsylvania Fire Insurance Company Building that once stood at that site. The reconstructed 1836 façade still serves as a stand-alone screen to the newer building’s entrance courtyard today.

Eyes In The Skies 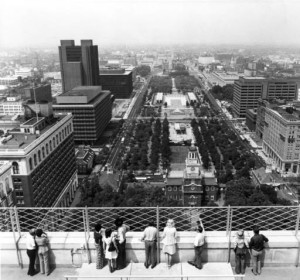 Penn Mutual’s original open-air observation terrace was on the 18th floor of the 1930s structure. The attraction opened in 1963 and was free to the public during the warm months. The outdoor deck was marketed as a good way to explore the city and its historic district, as it offered a superb panorama of Independence Square, Society Hill, Old City, the Delaware River, the Ben Franklin Bridge, and even Camden, New Jersey–almost all of Philadelphia and the surrounding area could be seen. Visitors had access to telescopes that were fixed onto specific landmarks, like Headhouse Market and the steeple of Christ Church. The terrace also featured platforms with maps and recorded messages that interpreted the views.

In June, 1976, a large visitor center opened atop the new Penn Mutual Tower in anticipation of the Bicentennial. The new addition connected with the open-air deck of the 1930s building. Enclosed by tall windows, the visitor center offered 10,000-square-feet of exhibit space. It included two theaters that continuously presented two slide shows: “Penn’s Promise,” which examined the man, his ideas, and how they influenced the nation’s history and “Philadelphia—Contemporary Theater,” which highlighted the city and its unique blend of citizens.

The new exhibit center also had seven walk-through areas that highlighted several topics, including a salute to the Mummers, Philadelphia “firsts,” the city’s colonial and contemporary arts and crafts, and a history of the city’s architecture and urban design. A seven-foot pretzel and a twelve-foot ice cream cone rounded out the center’s attractions.

Two glass-enclosed elevators lifted visitors high above Walnut Street to get to the visitor center and observatory. The elevator ride, as I recall, was especially thrilling and it was quite fascinating to see Independence Hall getting smaller and smaller as we rose higher. The glass elevator ride alone was worth the cost of admission. 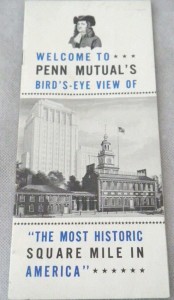 Penn Mutual closed the doors of the observation deck and visitor center in 1983. The popular local attraction may have lost its appeal following the Bicentennial or Penn Mutual simply needed the exhibit hall for additional office space–the closing was unfortunate, regardless. Thousands of area children took in their first panoramic view of Philadelphia from high atop the Penn Mutual complex, as did visitors from all around the country and world.

Today, little trace of Penn Mutual can be found in the 850,000-square-foot office complex. An arson fire damaged the eighth and ninth floors in 1989, causing the evacuation of some 1,500 Penn Mutual employees and building tenants. The windowless records storage room where the eight-alarm fire began was one-third the size of a football field and contained thousands of insurance files. Firefighters had to jackhammer holes into the tenth story’s concrete floor to send water down into the blaze. Torrents of water cascaded through the complex for two days. More than 120 firefighters suffered eye problems caused by acrid smoke from chemically-treated paper. Philadelphia fire officials regarded it as the most intense high-rise fire they ever fought. Toxic chemicals made the offices uninhabitable for a year and is likely the reason Penn Mutual left Independence Square for good.

Rubenstein Partners recently purchased the three building compound and large-scale renovations are in the works. The old Penn Mutual complex is now called One Washington Square.

On July 6th, 1976, the City of Philadelphia hosted Queen Elizabeth II and her husband Prince Phillip, the Duke of Edinburgh, after an exciting Bicentennial weekend. Like so many tourists at that time, the British royals took a ride up Penn Mutual Tower’s glass elevator to get a bird’s-eye view William Penn’s “City on the Delaware.” Later that day I watched as the Queen presented the Bicentennial Bell to the citizens of the United States as a gift from Great Britain. It is a memory I will always cherish.

The spectacular views that I took in as a child at Penn Mutual still tug at my heartstrings today. I look forward to the opening of the observation deck planned for One Liberty Place and hope that those same citywide vistas will inspire and enchant the next generation of Philadelphians.