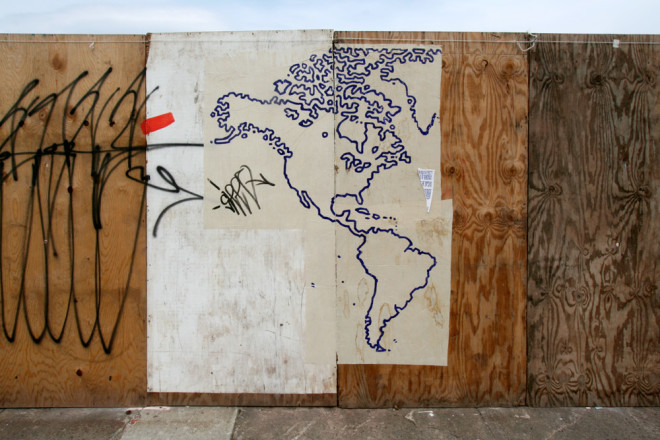 In 2008, Eric Brehm and Matt Berrian were two of the first artists to put paint to the temporary wall surrounding the vacant site of the demolished Ice and Coal building at 9th and Ellsworth in the Italian Market. The friends’ spontaneous act emboldened other artists to join in. They used paints left over from Bobos on 9th, an experimental space that acted as a locus of the vital South Philly art scene of the late 2000s. They were joined by associates of Connie’s Ric Rac, a longer-lived music and comedy venue. Brehm recalls, “We started getting people walking down 9th Street to pick up brushes. Most anything went. There was a little girl like nine or so who methodically painted a Google logo. That got painted over. But most things went.”

These rough and ready murals were notable, in a city dominated by the civic-minded, uplifting and dutiful Mural Arts Project, for their rawness, spontaneity and lack of stylistic consistency, owing to the many hands involved. One mural was self-deprecating, another, vulgar. “I did a Siamese butt man using a strategic hole in the wood. There was a lot of enthusiasm from the artists and passers-by,” Brehm says. But after a tit for tat with a city maintenance crew—apparently the murals had offended someone—they were painted over. 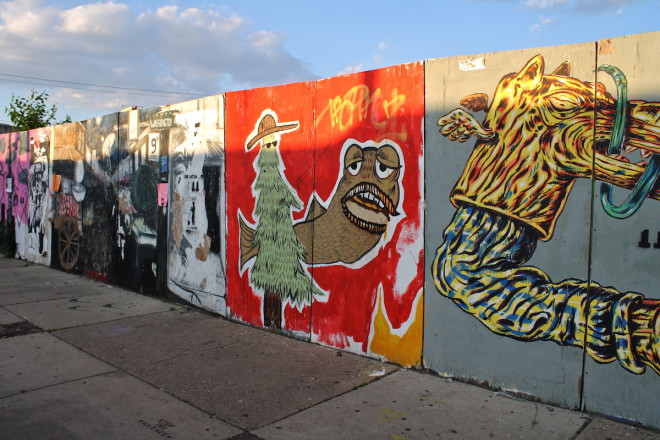 Undeterred, the artists proceeded with a second wave of murals, this time with approval from the city. The Passyunk Square Civic Association, with support from the South 9th Street Businessmen’s Association and then Councilman Frank DiCicco, gave the go-ahead for the second round. R. Chobert, a local contractor, donated paints. The resulting murals ran the gamut from quirky and cartoonish to abstract to simply decorative. The Dada impulse was subdued—the community’s stamp of approval came with the condition that they be inoffensive—and the resulting murals had staying power.

Meanwhile, scores of taquerias and Mexican groceries filled the old storefronts around the Ice and Coal building site. And Washington Avenue came to feel like the de facto border between the established Italian Market of legacy specialty shops to the north and the fulcrum of stores providing for the basic needs—hair cuts, Internet access, wire transfers, live poultry–of South Philly’s growing Latino and Asian immigrant communities.

By the fall of 2013, five years after the Ice and Coal building was demolished and the temporary fence erected, the murals were improbably intact. For years they served as a dynamic backdrop for the life of the sidewalk, adding to the festive atmosphere of cumbia rhythms and squawking chickens. And from an urban design perspective the murals disguised a huge vacant lot in the heart of an important, tourist-heavy commercial corridor. 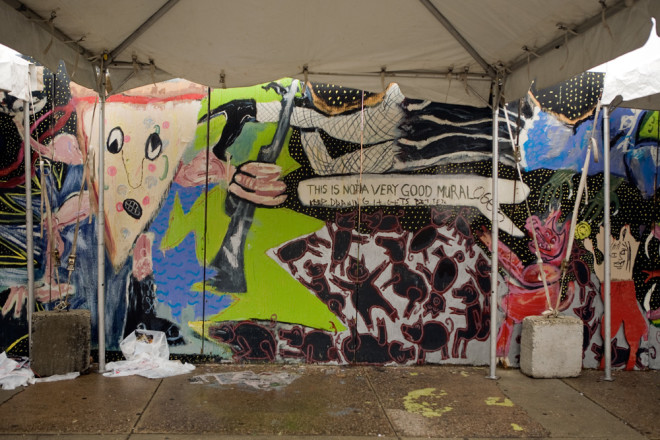 At the same time they registered the pulse of a changing neighborhood: liberal, bohemian, carnivalesque. In contrast to the grave, staid Frank Rizzo mural a few blocks north, the 9th and Ellsworth murals came to reflect the mutability of the Italian Market itself. In the five years of their existence the murals were constantly in flux. “It was sort of like a living, breathing organism,” Bauman recalls. Over time, other street artists began to crowd the murals with stenciled and pasted-up additions. Then came the garden variety taggers. These additions were quick and dirty, and they began chipping away at the integrity of the murals. A handful of artists associated with Connie’s formed a group called Artists Anonymous to help preserve the murals and coordinate new work. For a time new murals layered on top of the old mingled with a hundred tags and stenciled memes in a rich accretion of street art. But slowly and inexorably, the murals succumbed to attrition. One day a guerrilla marketing team rudely plastered ads for a pop singer across the entire length of the wall. In response, almost as a coup de grace, another maintenance crew, armed with a dismal shade of gray, painted over the ads, murals, tags and all.

The murals were not meant to be permanent, but the gray-washing reminds us of the presence of the 32,000 square foot vacant lot they concealed. The lot is owned by New York-based Midwood Investment and Development. Solid plans still remain to be unseen, but an associate in Midwood’s Philadelphia office says the concept is “food-centric,” in keeping with 9th Street’s appeal, possibly with a residential component. Midwood’s director, Stephen H. Gartner, looks forward to a Business Improvement District taking shape, a project that would undoubtedly transform the appearance of the southern business corridor of the Italian Market. The idea for the B.I.D. is being led by Michele Gambino of the South 9th Street Businessmen’s Association.

The Business Association put out a call for a BID Formation Advisor in November. Gambino confirms that they are in “Phase 1” of setting up BID, estimating that it would take 18 months to complete the process. They held their third advisory committee meeting on January 15, and plan to have a survey out soon–the goal is to have a first vote by October of this year. 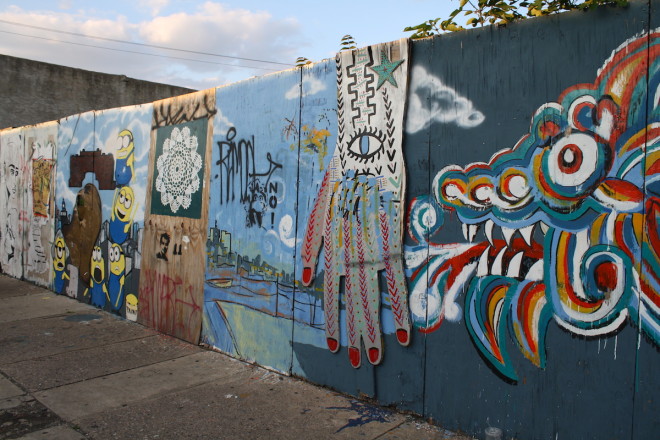 The B.I.D. plan was bolstered last year when the Business Association took over licensing and the upkeep of the market’s stands. Previously, this function had been regulated by the City, which had taken a hands-off approach. “The city has a bit of an antiquated system, but now they’re moving towards a system where everyone can renew things online, independently,” says Gambino. However, progress has been “pretty slow,” with many “unforeseen issues and little humps.” According to Gambino, the city wasn’t as prepared to pass the baton as they thought. The Association is still trying to clarify any hard lines, and see if the city does need a foothold, though Gambino remains optimistic. The Business Improvement District would also handle trash collection, the biggest problem in the eyes of local merchants.

For now, the fence surrounding its lot remains a blighting influence, but Gambino says that they are investigating creative ways to use the wall space and lot, hoping to have an action plan by the summer or fall. As for the fate of the empty Ice and Coal lot, food or retail and condominiums are the vision, but Midwood appears to be waiting for conditions to improve on 9th Street before making a decisive move.

Bauman and Frank Tartaglia opened Connie’s Ric Rac in 2006. Over the last eight years they’ve watched as the wall across from their club has gone from blight to public art and back again. During the wall’s first iterations Tartaglia picked up a brush and joined in the mural-making. Bauman sits on the board of the Business Association and though he relishes 9th Street’s singular old world feel, he would like to see the curb market enter the 21st century, to clean up its act a bit. East Passyunk Avenue is the model to be emulated. Bauman wouldn’t mind seeing a beer garden or a piazza-like retail hub with public space instead of the vacant lot. 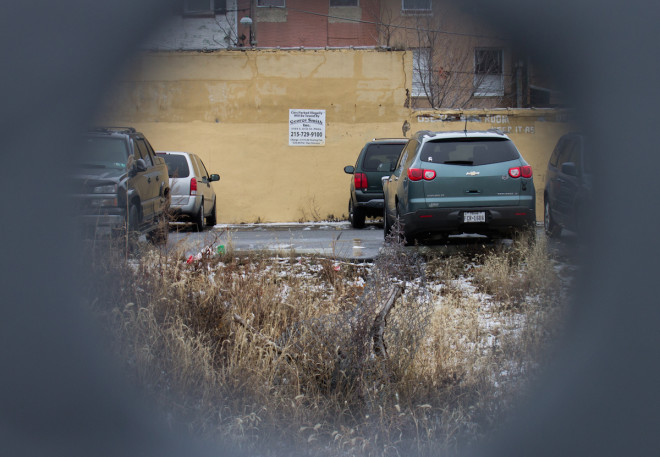 Peeking in from a hole in the plywood wall at the still-vacant Ice and Coal lot | Photo: Michael Bixler

A 2006 PennDesign revitalization plan for the Italian Market and its environs, done on behalf of the Passyunk Square Civic Association, stated the obvious: “The stretch [of 9th St] south of Washington Avenue is less vibrant than its northern counterpart.” They recommended the adaptive reuse of the then-vacant Ice and Coal building at 9th and Ellsworth, calling for a cultural center with apartments and artist spaces. Six years earlier the Planning Commission had deemed that stretch of 9th Street between Washington and Federal to be blighted, officially. PennDesign’s plans would not come to fruition. In 2008 the Ice and Coal building, certifiably blighted after lying abandoned for 40 years, was considered beyond repair and was demolished. A wooden fence was erected around the crater. Then, nothing.

In 2008 the PSCA enlisted Interface Studios, an urban design firm, to conduct another revitalization study of the Italian Market area south of Washington, which the firm dubbed the “Lower Italian Market.” Among the report’s calls to action was the following: “Don’t wait for a catalyst project to jumpstart…change. Initiate temporary uses to activate the corridor now.” South Philly’s artists have done their part. But real, long-term solutions to the vacancies, maintenance, and sanitation issues have been slow-going. 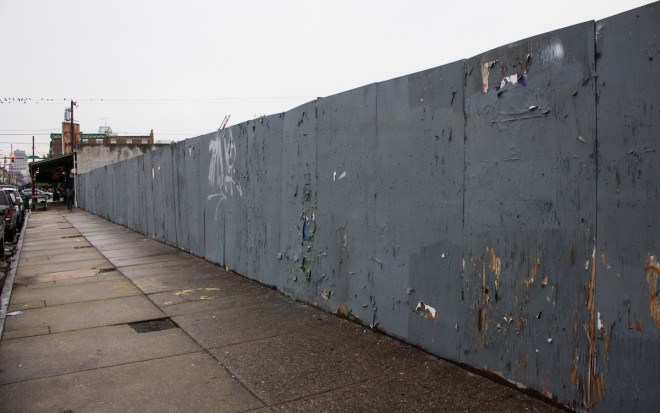 The 9th Street murals can be seen in the broader context of the grassroots movement known in academic circles as tactical urbanism, or the use of short-term tactics to address deficiencies in the urban fabric. Interventions have included guerrilla gardening, slowing traffic in pedestrian-heavy areas by painting crosswalks, installing benches and chairs at bus stops where none exist, and so forth. These small creative acts can demonstrate potential long-term solutions to urban problems. But perhaps more importantly, they give practitioners a sense of agency, a sense that they have a hand in shaping the built environment. City bureaucracies are slow and, for the uninitiated, engaging with the planning process can be daunting. In this context the 9th Street murals constituted a positive, organic response to a plywood barrier of a vacant lot and its visual blight. May the wall’s next iteration carry on the creative approach of its predecessors.

Special thanks to Conrad Benner of Streets Dept.
See his story on the South 9th Street mural HERE.