What Lies Within: The Dazzling Art Deco Interior Of 1616 Walnut Street 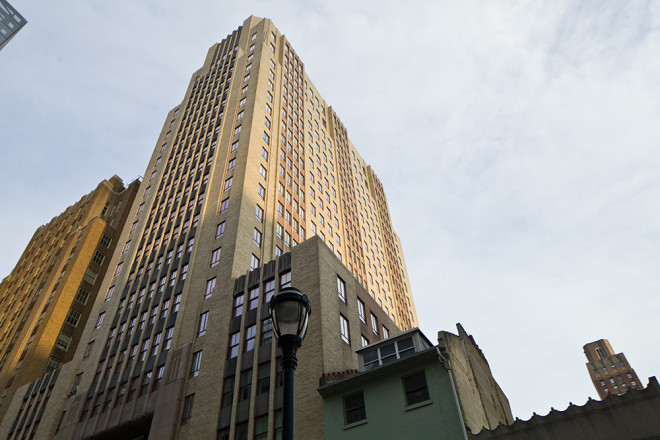 1616 Walnut is at right, the Sun Oil Building is at left | Photo: Peter Woodall

With apologies to the Chrysler Building, it’s the interiors of Art Deco buildings that usually contain the most spectacular designs. This is particularly true in Philadelphia, where the prevailing conservative taste took exuberant Art Deco and turned it into something relatively subdued thanks to exteriors clad in limestone or buff-colored brick.

There was, seemingly, no interior feature too humble or utilitarian for designers to lavish their skills upon. Even the mailboxes of great office buildings got the Art Deco treatment, and what a marvelous treatment it was, as Karen Greene illustrates in her new book: Art Deco Mailboxes: An Illustrated Design History. Karen will be presenting a slideshow on the subject tonight in a book signing event hosted by Hidden City at 1616 Walnut, one of three Philadelphia buildings featured in her book. Since it is sold out, we thought we’d do the next best thing and post this gallery of photos taken this summer, when the building’s conversion from offices to apartments was almost complete.

When 1616 Walnut was built by the Pew family in 1929, (the headquarters of their company, Sun Oil, was located next door), it included an apartment on the 25th floor for the family. The decorative woodwork survived subsequent decades when the rooms were rented out as office space, and were restored when the building was converted to residential use. What the stern Joseph N. Pew, the Republican political boss of Pennsylvania, and his flinty brother J. Howard Pew, a right wing Christian fundamentalist, thought of the decidedly whimsical motifs carved into the woodwork remains lost to history.