A few years ago, while driving down Ridge Avenue into Strawberry Mansion on my way home to the Northwest section of the city, I noticed a fading blue Star of David and a big sign reading “Kosher Delicatessen” on the white bricks of an old building. These seemed anachronistic and out of place–signposts of a community that I didn’t associate with North Philadelphia. I wasn’t intimate with the history of the area yet, beyond being well aware of John Coltrane’s formative years spent in a house on the edge of Fairmount Park. Years later, I returned to scour Ridge Avenue for those same signs that had caught my attention, but came up empty-handed. So, I began to dig and what I uncovered were the last vestiges of an historic Jewish community long forgotten.

In Philadelphia’s Strawberry Mansion neighborhood, demographic shifts took place about half a century ago. In Rabbi Fred Kazan’s introduction to Strawberry Mansion: The Jewish Community of North Philadelphia, by Allen Meyers, Rabbi Kazan says of the shift, “Today, Jewish Strawberry Mansion only exists in our hearts, thoughts, and memories experienced and shared by thousands of people less than 50 years ago. The Jews built a community, and when they left for such places as the Oxford Circle, Overbrook Park, and West Oak Lane-Mt. Airy, they left behind their houses of worship. These buildings have withstood the test of time; they now serve Strawberry Mansion’s black community as living monuments and churches.” In my own search I found most of the surviving synagogues being reused by Christian congregations.

Many of these were “row house synagogues,” Kazan tells me on the phone. “You knock down some walls in a house and turn it into a synagogue. But many of these places were not permanent. They lasted only a generation and a half.”

For a community that thrived in the neighborhood for only a few generations–between World War I and the end of World War II–the old Jewish congregations of Strawberry Mansion left a number of remarkable buildings. Alterations have been made, of course, as the Christian congregations that now worship inside these structures have carefully adapted them to their own beliefs. Though, in a few striking instances, the presence of the previous tenants still remain.

Left Behind: The Death And Life of Strawberry Mansion’s Synagogues

B’nai Menashe Synagogue on 31st Street, founded in 1925, now houses the Redeem Baptist Church. This synagogue served mostly Eastern European Jews in the northern section of the neighborhood. The name of the synagogue was adopted from the founder of the Mt. Lebanon Cemetery in Collingsdale, Pennsylvania, and the synagogue’s primary benefactor, Menashe Abrams. Though the B’nai Menashe may have been the most humble of Strawberry Mansion’s six surviving synagogues, it is perhaps the most unique, evoking urban European synagogues of the late 19th century. The building survived a firebombing attempt in October 1953. It’s now painted in peach and clothed in stucco and aluminum trim. 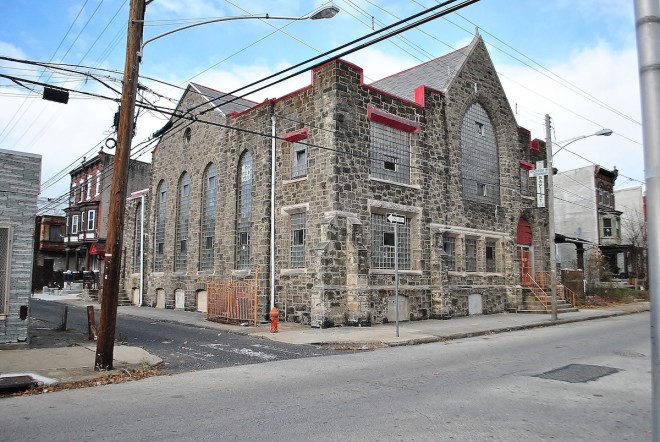 The next two synagogues–one of them the most grand in the neighborhood–stand practically across the street from one another. The Kerem Israel Anshe Sfard on 32nd and Morse Streets retains much of its original character and now serves as a Baptist church. Originally a Methodist church, the orthodox congregation bought the building in 1917. Kerem Israel was the last congregation to leave the neighborhood in 1971. Its stone façade is almost medieval and imposing despite the windows being replaced with glass cubes. 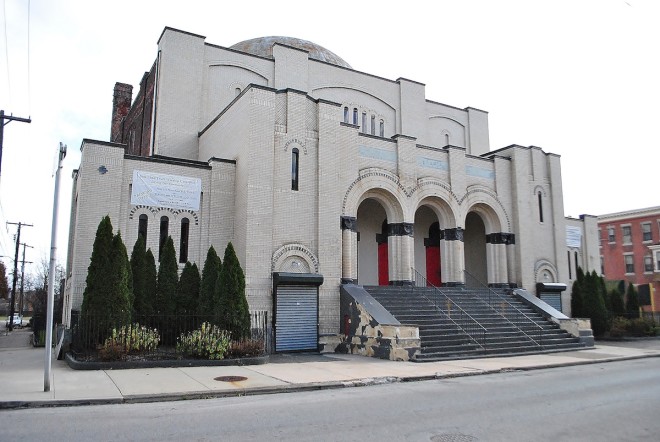 Across the street, just south on 32nd Street, is the Beth Israel Temple, the neighborhood’s largest synagogue. It was the first that I visited that retains a Jewish symbol on its façade. The congregation this building served dates back to 1840–the third to form in Philadelphia. The temple, designed by Frank Hahn, was built in 1909. Above the entrance you can still read the words “Beth,” though time and weather have worn them down greatly. The façade shows modern French and Byzantine influences. The interior galleries were inspired by the Keneseth Israel Temple at Broad and Montgomery, according to a history of the structure written by members of the congregation. The dome at the heart of the building has a 50-foot circumference and reaches 80 feet above street level. More than 100 years after it was built, it might still be the most impressive structure in the neighborhood.

Rabbi Kazan tells me that after World War II, synagogue architecture changed significantly as the communities moved into the suburbs. Each of Strawberry Mansion’s synagogues contained a balcony—or mechitza–where women worshipped separately from men. The new suburban synagogues, which were often called “Jewish community centers,” would have a more open worship space that was accessible to all, with a large room behind the mechitza for recreation. “The newly ordained rabbis were trying to change synagogue architecture to increase interactivity and usefulness for the community,” says Rabbi Kazan. 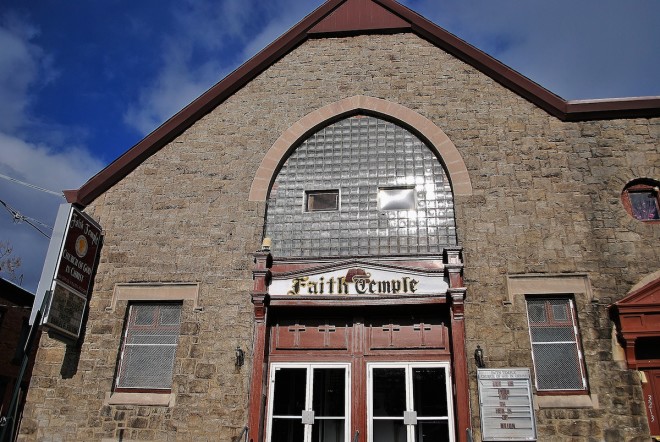 Aitz Chaim Nusach Sfard on Cumberland Street–now home to Faith Temple–was built in 1918. In an old archived photo the Faith Temple sign is visible, but beneath it you can still see two Stars of David in stained glass above the entryway. The Stars have since been replaced with wooden crosses. The Halacha, which contains the commandments of the Jewish faith, says that a synagogue building retains its holiness even after it is no longer used as a house of worship by Jews. 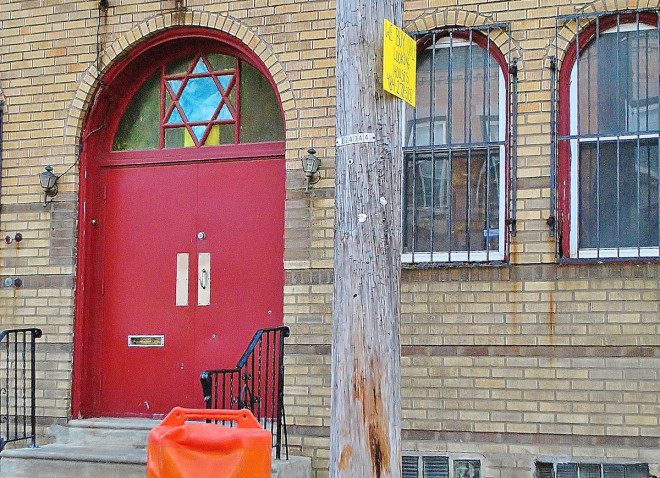 The former Chevra Thillum Anshe Sfard evokes a school building and may have been based on the Tel Sai Yeshiva in Russia. In a photo from the 1990s, there are crosses on the double doors on the front of the synagogue, a modest brick structure built in 1917. Those crosses are now gone, but the big white box cross with the name of the church hanging out over the sidewalk remains. There’s also a Star of David–right underneath the cross and above the doors–in blue stained glass.

On 33rd Street, going north along Fairmount Park toward Ridge Avenue, sits the former B’nai Jeshurun, now Cornerstone Baptist Church. A massive white cross hangs over the door and another heads skyward with its crossbar stretching above the roof of the gleaming yellow and brown stone façade. Two short lancet windows let in light on the park side. Above the entrance–under an intricately carved stone arch and between two sets of nested columns–a stone Star of David and menorah floats like a massive beacon high above the street.