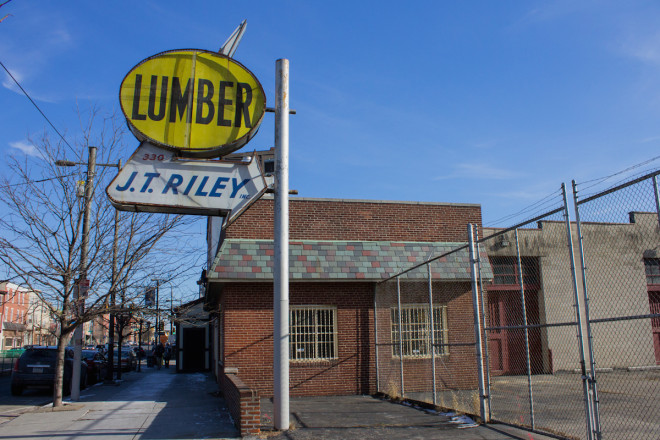 After 110 years in the lumber business, the Riley family closed shop at 3rd and Girard last year | Photo: Michael Bixler

In December, over a year after Donald R. Riley last closed the handsome paneled wooden gates of his family’s retail lumber yard at North Third Street and Girard Avenue, the zoning committee of the Northern Liberties Neighbors Association approved plans for 20 apartments and 3,100 square feet of retail space in a mixed use project. All new construction will be designed by KJO Architecture under the direction of developer Jesse Shemesh. Although a final sale has yet to close, the former lumberyard has been on the market with an asking price of $2.5 million. Eleven triplexes will front the cross streets–Units A through E on Orianna and Units F though K on North Third, replacing the brick wall that now stands emblazoned with the fading ghost sign, “J.T. Riley, Since 1905.”

Heritage At A Crossroads In The Era Of Redevelopment 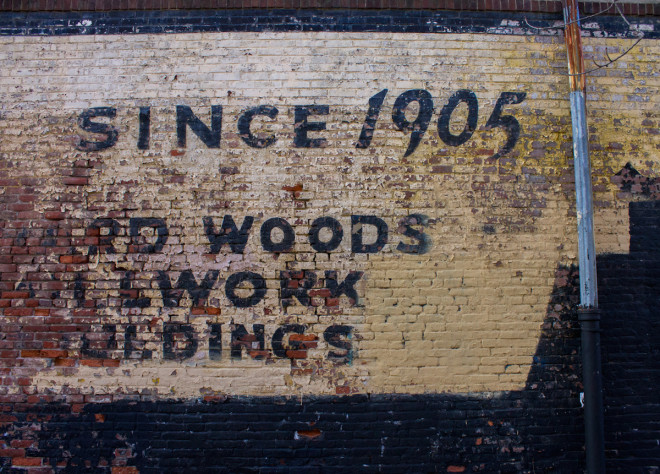 Established in 1905, J.T. Riley was one of oldest continually operating lumber merchants in Philadelphia proper. Like many of the defunct commercial and industrial sites that once characterized “the Workshop of the World,” the odd array of Riley’s one-story brick, stone, block and frame buildings will be demolished to make way for modern development, as the age of one-story loft conversions–like the adjacent, rehabbed foundry–has passed in Northern Liberties.

Kevin J. O’Neill, owner of the KJO Architecture, believes that preservation is often not a factor when the buildings have outlived their usefulness. “The way buildings are constructed now is completely different than how they were construction 100 or 200 years ago,” said O’Neill when asked about his thoughts on preserving elements of a development site. In his opinion, O’Neill explained that the preservation of buildings, architectural features, and other components are not usually taken into consideration unless it is within the developer’s plans or pushed by the neighborhood association. 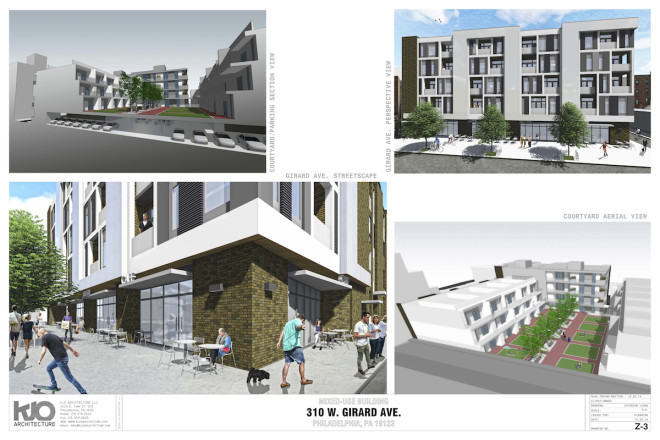 Eleven triplexes, a courtyard, and first floor retail are the current plan for redeveloping the J.T. Riley site | Rendering courtesy of KJO Architecture

Bound by Girard (north), Third (east), Cambridge (south) and Orianna (west), the entire block is largely occupied by the old lumber yard. The former Eagle Iron Works is at the south end and two row houses take up the rest. Riley’s itself is comprised of six structures, including a large one-story brick and concrete block warehouse that make up about half the parcel and an attractive building at the corner of Girard—brick with a stone foundation. A one-story office building is at the center of the block on Girard with a driveway leading to the court. 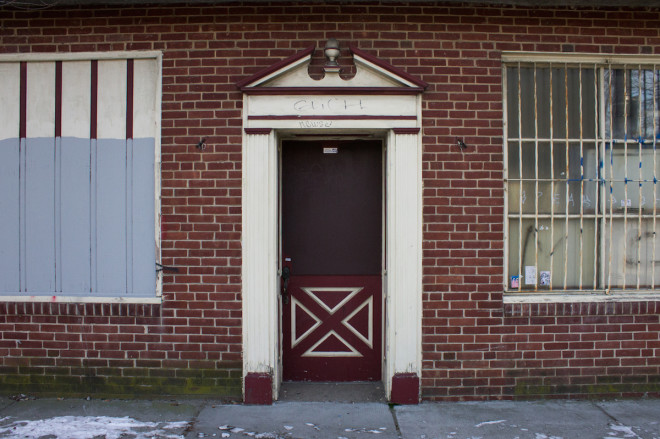 After getting pushed out of Society Hill, the Riley family moved their offices and lumber yard to the edge of Northern Liberties | Photo: Michael Bixler

Donald R. Riley’s nephew, Robert S. Heppe, Jr., M.D. of Harwich Port, Massachusetts, confirmed by telephone that his great-grandfather founded the business in the early 20th century, which then was passed on to his grandfather and great-uncle, and finally operated, and ultimately closed, by his uncle. “My Uncle Donald would love to talk about the history of lumber yard. He’s 90-years-old, but he could still tell you everything,” said Heppe.

When I briefly spoke to another nephew, Richard S. Riley, he was a bit evasive, but did begrudgingly confirm Heppe’s statement with a nod, “Uncle Donald operated the business himself until he was 88 or 89, which he eventually closed due to profit loss.” 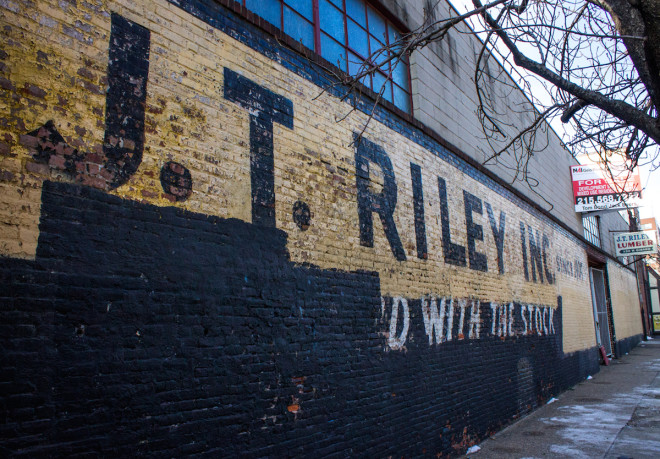 Northern Liberties will lose more of its historic, industrial character when the lumberyard is cleared for new development | Photo: Michael Bixler

Some longtime neighborhood residents, like artist Jennifer Baker, curator of Northern Liberties: From World’s Workshop to Hipster Mecca and the People in Between, an exhibition last year at the Philadelphia History Museum, see the closing of the lumber yard as a loss for the neighborhood. “While at first Home Depot’s prices were more appealing to me than Riley’s, I soon learned that the low cost lumber was useless to me as an artist,” Baker said. “Riley carried high quality products.” 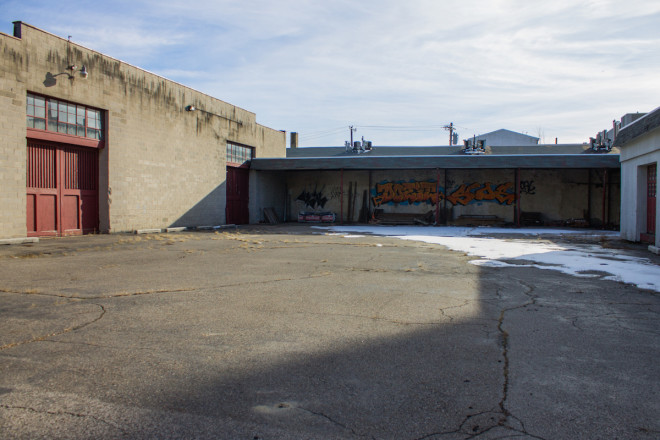 Inside the empty lumberyard at J.T. Riley | Photo: Michael Bixler

Like Baker, Mark R. Cherry, owner of Architectural Antiques Exchange at 709-15 N. Second Street, laments the loss of Riley’s as one of the few surviving businesses from the old days. Cherry is pleased that the neighborhood has been revitalized since his arrival in 1979, but could not express his enthusiasm without a tinge of regret. “I am sorry that the developers haven’t chosen to preserve the character of Philadelphia, but if this is what it took to revitalize then I have to go along with it,” he said. Cherry admitted that new construction is so common in his neighborhood that he hardly even notices anymore. Like other neighbors, neither Baker or Cherry knows much about Riley’s closing or its history, but they both seemed to regret its loss, as well as the quick erasure of so much of the neighborhood’s accumulated character.

The Evolution of Riley’s

Several decades before J.T. Riley opened at 3rd and Girard Avenue, “Albany Lumber,” “Panel Plank,” and other choice materials were first sold around 1865 by James Gill at his new lumber yard at 1348 Marborough Street–just east of what was then Commonwealth Hall. Born in Philadelphia, Gill, no doubt, knew that he was a newcomer to the city’s history of lumber merchants–one of the oldest lumber businesses was founded by Hugh McIlvain in 1798, still operating to-date albeit outside the city limits. Gill’s lumber yard was one of multitude of businesses that defined the dense neighborhoods of Fishtown and Northern Liberties—both among the oldest industrial neighborhoods in America. By the early 1870s, Gill had taken over a coal yard and established a lumber yard on a narrow portion of Riley’s current tract at 1168 North Third Street. In those days, what would become Riley’s was smaller and walled-in by attached brick trinities that lined both Orianna and Girard and the foundry of Hoff, Fontainie, & Abbott, later to become the Eagle Iron Works. According to G.M. Hopins’ Atlas (1875), the lumber yard consisted of two brick buildings and five wood-frame sheds. Tragedy struck on September 19th, 1883 and the entire block was burned down by arsonist Millard Binus. While largely insured, the loss was $60,000-$75,000. Despite his business literally going up in flames, the Philadelphia Inquirer still refered to James Gill as “a wealthy lumber merchant” when he died in 1901. 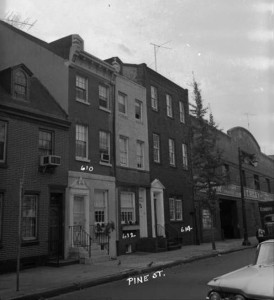 Between 1892 and 1896, the well-known construction firm of Benjamin Ketcham & Sons expanded its business interests to lumber. The company first opened a yard at 229 N. Broad Street and, within a year, took over the future site of J.T. Riley at 1168 North Third Street. The company was then taken over by Benjamin Ketcham, Jr. One of Ketcham’s sons, Howard, first worked as a clerk in the family business, but, by 1895, had taken over Gill’s old yard. A middle class Philadelphian, Howard Ketcham was educated at the Central Friends School and was an active member of the Philadelphia Lumberman’s Exchange.

A decade later, another long-time lumber merchant first enters the Philadelphia scene, opening its doors at the northeast corner of Sixth and Pine Streets. From a middle-class Baltimore family, James Tarleton Riley established J.T. Riley in Society Hill in 1905. From that time through the 1920s the business grew. Riley, his wife Anna May Harper, and their four children went from a row house in Kensington at 1917 East Orleans Street in 1900 to a more expensive home at 5036 Osage Avenue by 1910. J.T. Riley operated the lumber yard at Sixth and Pine throughout the mid-20th century. 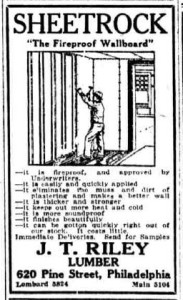 Both Ketcham and Riley flourished despite the economic crises of the early 20th century. In 1919, at the future site of Riley’s, The American Contractor reported that Architect H.B. Weldon had drawn up plans for Ketcham’s “Office, Lumber Shed & Garage.” However, the site burned yet again in June, 1940. “Damaged was estimated at $1,000,000 today from Philadelphia’s first five-alarm fire in a decade which swept a lumber yard and spread to houses, stores, and manufacturing plants in the vicinity,” the Associated Press reported. The 1940 fire and subsequent changes are responsible for the present configuration and appearance of the site.

By 1935, the Riley family had moved to West Philadelphia—first at 6200 Carpenter Street and later at 5127 Pine Street. Riley’s sons had both moved to Collingswood, New Jersey by 1930, where the last owner Donald R. Riley was born in 1925. The lumber business operated at Sixth and Pine for many years. However, in the mid-20th century, J.T. Riley was forced out of Society Hill by urban renewal. The company moved its primary operations to Third and Girard, which was likely purchased from Ketcham at that time or perhaps slightly earlier. The lumber business operated at this final location until it recently closed.

Fading Away In Increments 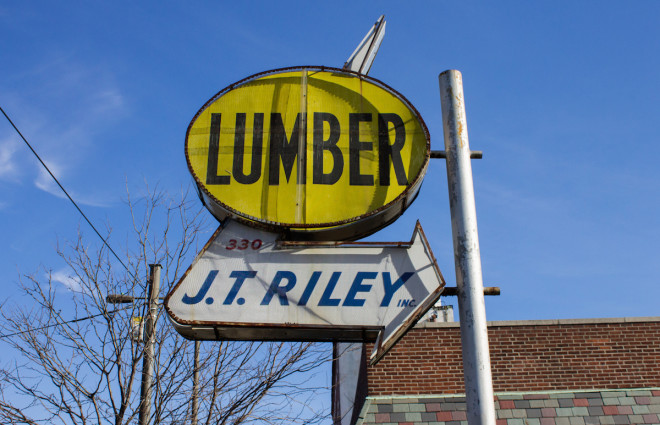 It’s not hard to feel that these particular buildings may have outlived their usefulness–the quadrant of low-slung brick and concrete lumber storehouses certainly pose a practical, reuse design challenge. Still, certain aspects of the industrial composition could be incorporated into the coming development, particularly the painted brick wall on Third Street and its mid-century sign. (It’s unfortunate that Frankford Hall is so close as this space would have made a wonderful beer garden.) Ultimately, it’s not that the singular loss of J.T. Riley will be detrimental to the character of the neighborhood, but rather that its removal is part of an ever-lengthening list of cumulative losses that is quickly erasing Northern Liberties’ industrial heritage, a built history that can never truly be replaced.