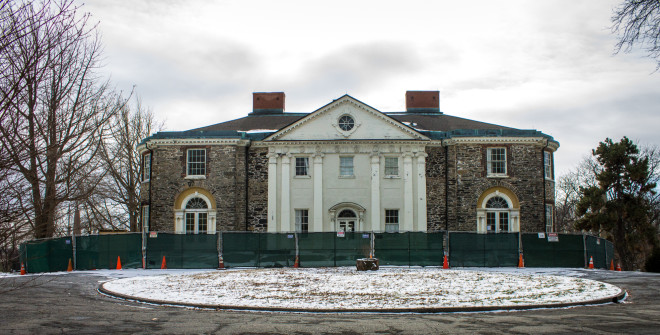 At the heart of Woodlands Cemetery’s tranquil 54 acre National Historic Landmark District stands its neoclassical centerpiece, William Hamilton’s Mansion. Underneath it lies a network of dimly lit service tunnels that were years ahead of their time in both functionality and architectural execution. The “cryptoporticus”–along with the north terrace–has been undergoing heavy restoration for over a year now with the help of a $1 million state-funded grant. When we received word that the cryptoporticus would be exposed for the first time since Hamilton finished renovations of the original country house we couldn’t resist seeing it for ourselves. 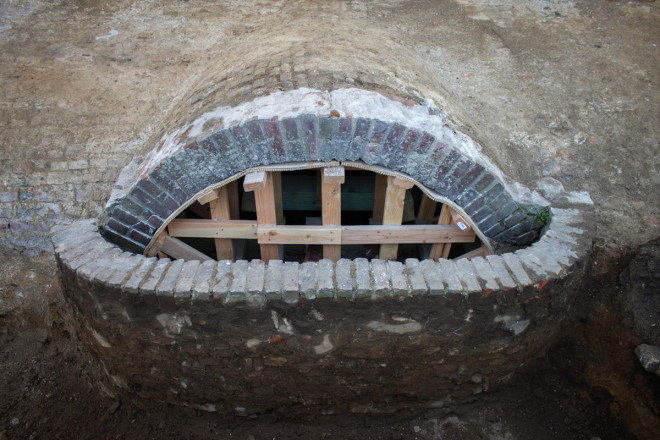 Gentleman, horticulturist, and Red Coat sympathizer, William Hamilton first shaped his mansion in the image of a Georgian country estate. After revelatory inspiration abroad in England, he began massive renovations to the property between 1786 and 1789. In addition to transforming the neoclassical building into what is regarded as the nation’s first example of Federal architecture, Hamilton added the cryptoporticus–a plexus of vaulted, subterranean passageways that became the arteries of the mansion, guiding servants throughout the building’s foundation to different points of domestic work spaces within the mansion, basement, and beyond. 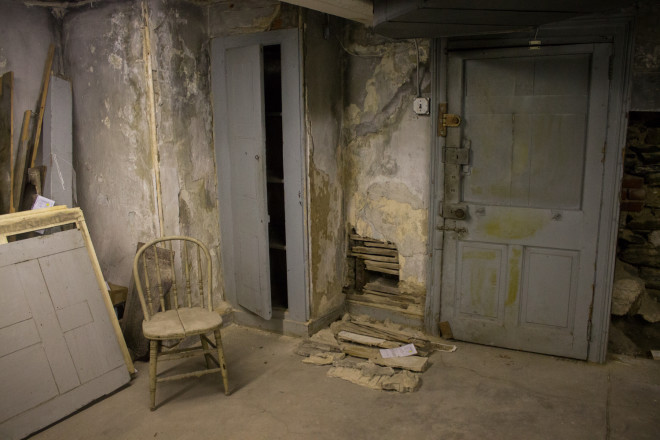 Inside the basement kitchen of Hamilton’s Mansion | Photo: Michael Bixler

While winding through the dimly lit corridors of the mansion’s kitchen, icehouse and dry goods storage–and later weaving through a precarious, unlit web of underground scaffolding and supports–The Woodlands executive director Jessica Baumert explained that, at present, the mansion’s underground project has two fundamental objectives: conservation and interpretive history for the public. “The cryptoporticus restoration will help us start to tell different stories about the site,” said Baumert. “The tunnel played such an important role in how the mansion and the landscape worked together.”

Baumert, who has held the reigns of the Woodlands since 2011, said that once fundamental structural improvements are made—primarily rebuilding the cheek wall and supporting the arches with tie rods—the focus of opening up the cryptoporticus and the mansion’s basement to the public will gradually come into view. “For now, being able to share the cryptoporticus with people will not only give a better understanding of the building, but will put the building in context with the landscape,” said Baumert. “Long term, we hope to be able to restore and interpret the most significant of the basement spaces and have them open to the public on a more regular basis.” 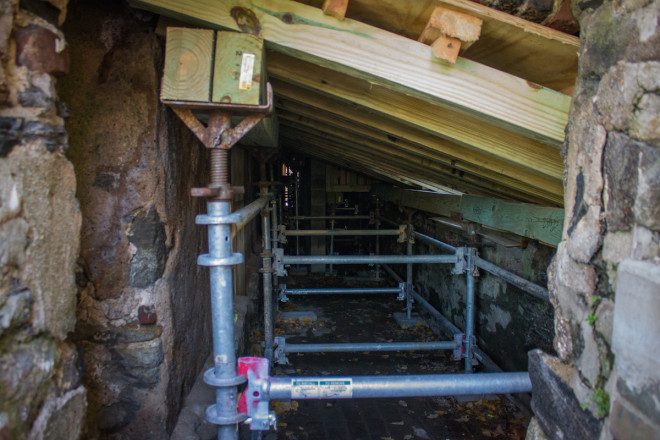 Daunting: the cryptoporticus’ grid of cheek wall and arch supports was a difficult, but passable obstacle course | Photo: Michael Bixler

Seeing the mansion’s north terrace and stately marble stairs stripped away was a bit shocking. After a large-scale study and mortar analysis was conducted on the north entrance, findings indicated that the terrace was seriously compromised and structurally unsound, in part due to significant deflection. The marble stairs have since been removed and are currently undergoing conservation. The eroded concrete slab underneath has been taken out and a more permanent support will take its place.

Excavation, especially those undertaken on historic, urban properties, often uncovers mysteries. Here, workers revealed a water trough for horses–or or possibly a water garden–beneath the left side of the terrace stairs. Opinions among archeologists and historians called in to interpret the findings have been varied. “There are a handful of thoughts, depending on who you talk to,” said Baumert, who says she believes the finding is from the 19th century. “We’ve documented it and will be sending pictures to all kinds of people to try to determine what it was.” 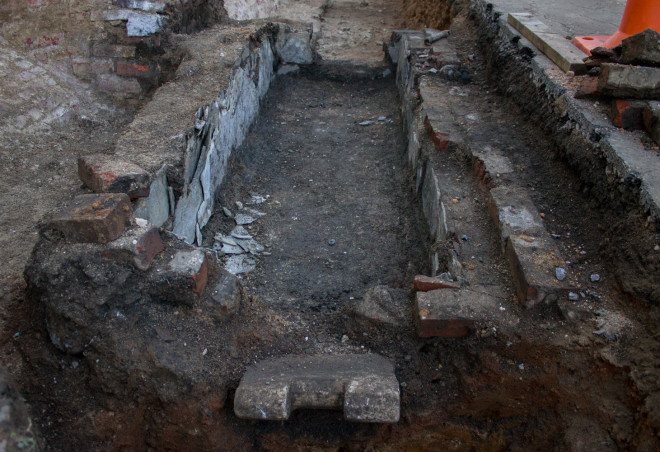 Work on the cryptoporticus, which began in November, 2014, has now paused for the winter. The tunnels have been covered until work resumes in March. Restoration is to wind up in early June.

To learn more about The Woodlands’ architectural and botanical history, and their public green space mission, click HERE