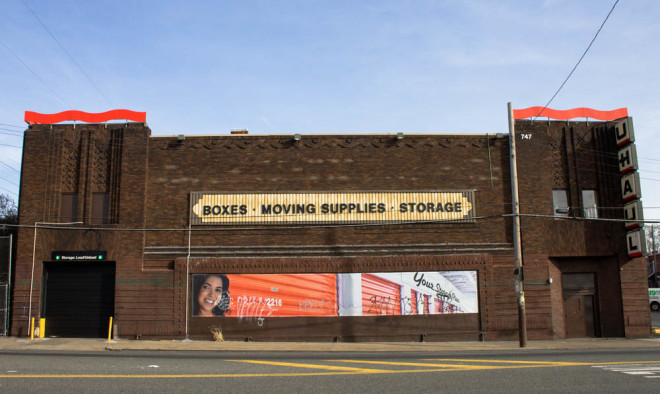 Self storage companies pepper the city with the reuse of old commercial buildings, like this former, 30’s-era truck sales center in Nicetown-Tioga | Photo: Michael Bixler

I have passed by the U-Haul storage facility at 747 West Allegheny Avenue on SEPTA’s Trenton Line many times. It has all of the exterior trappings of an old movie house–the building’s oblong shape and the whimsical brick work on its façade–and had me referencing Hidden City contributor Rachel Hildebrandt’s excellent resource, How To Spot A Theater. But decades of reuse often obscure the true identity of buildings and unexpected origins surface. And so it goes: this deceptive piece of creative masonry began its life during the Great Depression as a sales center for the bygone truck manufacturer Brockway Motor Company.

George A. Brockway started his truck manufacturing company in Cortland, New York in 1912. Born out of his father’s 61-year-old carriage company, the Brockway Motor Company manufactured all kinds of utility vehicles: school buses, garbage trucks, military transport, and fire engines, to name a few. By 1917, the company began a massive expansion, setting up sales branches all over the East Coast after its success led to servicing clients in 65 countries. 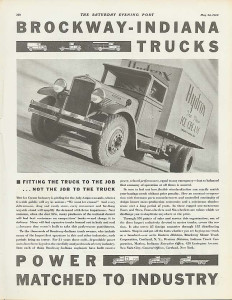 Brockway entered the Philadelphia market in 1919, setting up shop at 2324-28 Market Street. In 1928, the company had recently absorbed its Mid-Western counterpart, the Indiana Truck Corporation, and a massive re-organization of sales centers followed. At the Philadelphia branch, the new district manager, Gary M. McWhorter, was ambitious to expand the company’s local reach by building a modern facility to serve the entire Delaware Valley. The new sales center would be much larger and more ornate than anything the company had constructed before.

No architect is officially on record for the building’s design, but all clues point to Carl W. Clark, whom Brockway almost exclusively used throughout the 1920s and 30s. Clark was the most prominent architect in Cortland, New York at the time. Later in his career, Clark would be regarded as the “dean of Central New York architecture,” heralded for his numerous public schools and library buildings in upstate New York. George Brockway admired Clark’s work greatly. Along with designing most of the early truck sales centers for the motor company, Clark was also commissioned to design George Brockway’s residences and Brockway Hall at SUNY Cortland. 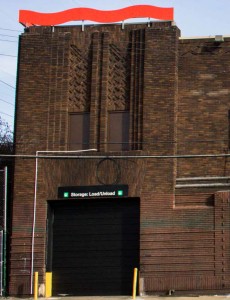 Clark was known for being versed in several different architectural styles, but one common thread linking his buildings is the creative use of brick–almost all of his building’s facades have an unusual pattern or arrangement, no matter how pronounced or minute. The Brockway sales center on West Allegheny Avenue is a standout in this regard. Bricks are laid vertically, horizontally, diagonally, and display an array of patterns. It remains unconfirmed, but if this building was designed by Clark it is one of his most unusual. The primary challenge for attributing the sales center to Clark is that all of his other Brockway buildings have been demolished or remodeled beyond recognition, though a number of them still stand, albeit heavily remodeled, in Boston, Buffalo, and Utica.

When Brockway moved into the new building in 1930, trade publications referred to it as the company’s “De Luxe” location. As demands for their trucks increased during World War II, the company closed West Allegheny Avenue and moved the sales and maintenance center into its new factory at the Northwest corner of Castor and Erie Avenues–now the site of a Rite Aid. In 1956, Brockway Motor Company was acquired by Mack Trucks.

After the merger, the sales center was purchased by Arel Realty and was managed by famous local developer and urban planner Goldie Hoffman. It was leased to Sears Roebuck company, which converted the space into a merchandise warehouse and distribution center that served the seven Sears department stores in Philadelphia. By 1955, the warehouse became a service and repair department. A large Sears billboard was installed on the roof of the building in 1963 facing the train tracks, commanding the attention of commuters who passed by twice a day. The Sears Service Store underwent a major renovation in 1968 and remained in business until the late 1970s.

In 1979, the building was purchased by U-Haul of Delaware Valley and was altered for both storage and truck rental. Most of the windows were bricked-up, new signage was installed, and storage bays were added to the southern wall. By 1992, the three lots used by the company–the parcels bounded by West Allegheny, West Glenwood, the old P.R.R. tracks, and the old sunken Reading R.R. Richmond Spur track–were consolidated into two. 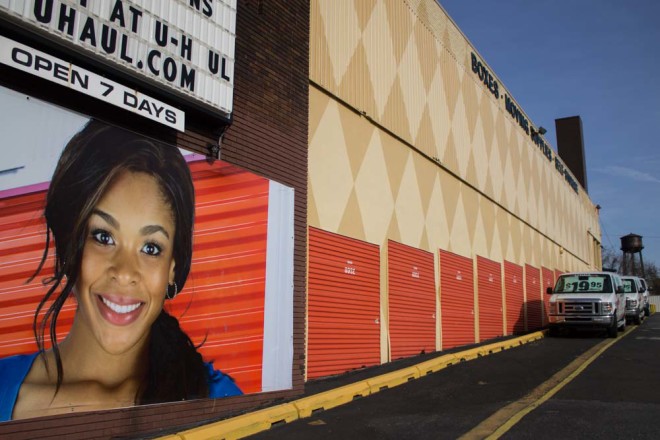 The windows, and most of the facade, have been covered up by diamond-patterned siding | Photo: Michael Bixler

The building and its adjoining lots were eventually acquired by current owner, AMERCO–U-Haul’s current parent company–for $1.5 Million. In 2013, the walls facing the south and east were covered with diamond patterned siding and advertisements were added to the West Allegheny Avenue facade.

Now covered from roof to foundation with vinyl siding, orange, rolling doors, and oversized self storage ads, the architectural personality of Brockway Motor Company’s “De Luxe” sales center still manages to shine though. If it was indeed designed by Carl W. Clark, this unassuming enigma on Allegheny Avenue may be the most unique and intact of all the truck manufacturer’s buildings in the country.