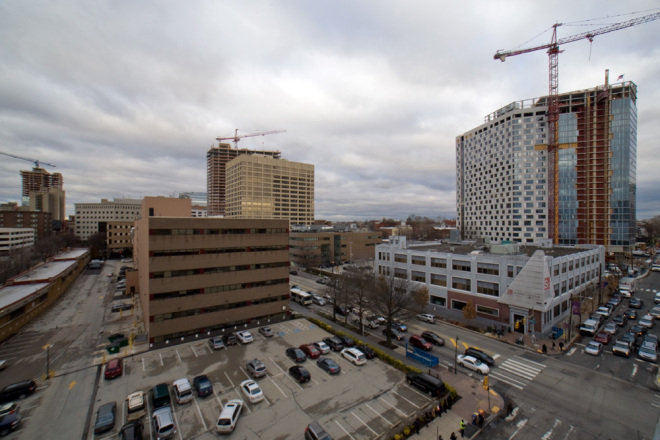 Developers are in process of transforming the West Philadelphia skyline with four significant residential towers, in various stages of completion: Evo (which Hidden City co-editors Nathaniel Popkin and Bradley Maule reported on last year) Drexel University’s Summit, at 34th and Lancaster Avenue, the University City Science Center’s new residential tower at 36th and Market Street, and 38Chestnut, rising adjacent to the Episcopal Cathedral. Although only one–Evo–is finished, with renderings on hand and principles of city planning in mind, we can begin to rank the urbanism of all four. 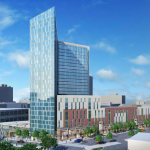 Easily the most urban-minded is The Summit. While some of the façade material choices, including brick panels, are not as impressive as we’d like, the structure has the greatest challenge of any of the four: the longest street wall, wrapping along 34th Street then Lancaster Avenue all the way from Filbert Street to the Community Education Center. It rises to this challenge admirably, providing retail and extending Lancaster Avenue’s commercial corridor another block down. Not yet constructed is an impressive sunlit atrium in the site’s southern triangle, which will provide a permeable façade all the way along both of the site’s major streets. The Summit also has the most unique standout feature of these buildings, which can be seen if you look down JFK Boulevard from City Hall. The tower perfectly lines up with JFK’s axis, creating a terminated vista and drawing subtle attention to the elegant, neoclassical façade of 30th Street Station. This effect will grow stronger in time, as the “Innovation Neighborhood” straddles JFK behind the station and more properties flanking the SEPTA tracks are developed, but the skeleton of a landmark view can already be seen. 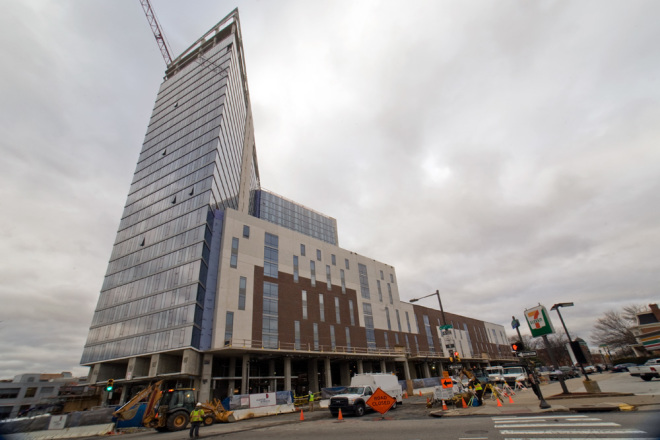 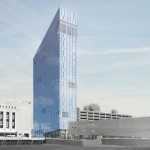 Second up under the urbanist microscope is Evo. Constructed on the constrained lot at 30th and Chestnut Street and part of the Cira South complex–including the renovation and rehabilitation of the old Post Office into IRS offices, the parking garage along 30th, and the under-construction FMC Center–Evo stands out as a feat of smart engineering. It is built on a floodplain, requiring the deepest foundations of all four buildings under review, and it is partly built above the railroad tracks, requiring an ingenious steel truss that is now encased in concrete. The Erdy McHenry design for Evo represents a return to form for the firm whose most recent work includes the decidedly forgettable Juniper and Arch Streets parking garage and the Pennsylvania Ballet center, which involved the controversial demolition of the Willys-Overland Building at 325 N. Broad Street for empty, open space. Evo both makes an impact from any vantage point along the Schuylkill and terminates a major sight line down Lancaster Avenue. Erdy McHenry’s trademark contrast of concrete and glass provides a dramatic corner that makes a striking first impression when seen up close.

Unfortunately, the very same truss that was such an impressive feat of structural engineering prevents this building from being as permeable as any of the other ones on the list. Instead of a second retail space along Chestnut Street we settle for a wall of blue glass–one which is, incidentally, partially blocked by the section of that truss that is a stairwell up to a second-floor space. 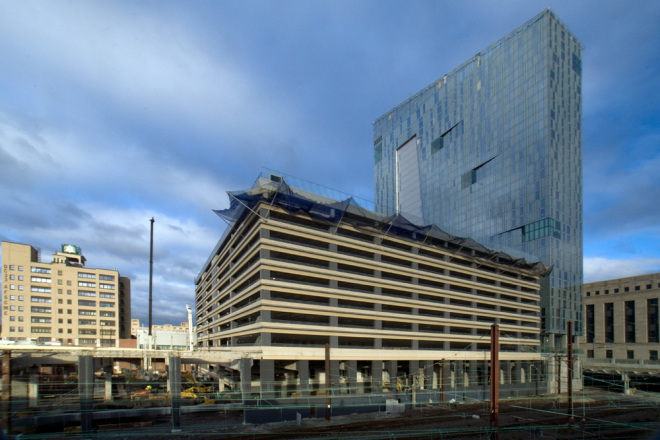 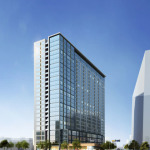 3601 Market, a residential tower atop a retail podium, is now the University City Science Center’s tallest building. Unlike either the Summit, which has a unique urban-design achievement, or Evo, whose engineering and architecture more than compensate for a minor ground-level quibble, 3601 Market’s major claim to fame is that it is the first residential structure to be developed in the Science Center. 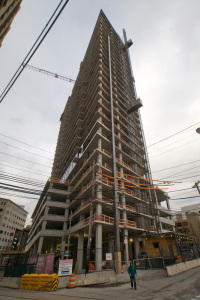 Beyond that, it adds to the improving street wall that currently extends from 3535 Market Street to the new Penn Medicine building at 3737 Market Street. It is slated to feature a two-story retail structure facing the corner, which will integrate well with the offerings on the other three corners of 36th and Market Street, and will aid in what will likely be the slow process of reurbanizing the Science Center, currently by far the city’s worst office canyon–vacant and doornail-dead after five o’clock.

3601 Market’s BLTa-designed architecture, however, comes across as uninspired and dated. It is also a little too busy, using the currently en vogue “barcode” style of windows. Combined with a glass section on the tower’s southeastern corner and a relatively traditionalist retail component, everything is crammed into a site that is little more than half the size of the Summit’s. While it is arguable that the tower’s aesthetics and the ground-level urban experience should be considered separately, the BLTa design is distressingly disjointed, and, despite its height, will have the least overall skyline impact.

3601 Market is the only structure on this list to feature a significant parking element–a large garage that will be covered up by the final skin. It is a five-minute walk from both Lancaster Avenue and Walnut Street, and an easy trolley ride into Center City–the 10 passes right by the site–so why does it need so much parking? 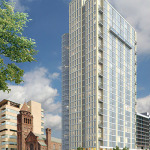 The weakest link of the four–though still highly urban–is 38Chestnut. Bracketing the historic Philadelphia Episcopal Cathedral and International House Philadelphia, the building–also a BLTa product–consists of two structures: the tower, which occupies the corner proper, and a retail podium on the site’s east side. Lacking that fashionable barcode fenestration–the only building on this list not to employ it–this structure’s streetwall façades are industrial-loft evocative and feature extrusions of curved concrete behind, 38Chestnut’s major aesthetic shortfall. Unlike 3601 Market, whose tower is busy, but not necessarily disjointed, 38Chestnut’s tower’s façade is so decidedly off it is almost has a personality disorder, presenting one face to the city and a whole different one when entirely within the site. No individual part of this building is ugly–and the curving concrete façade is an interesting idea–but the composition as a whole feels disjointed.

Chestnut Street’s fractured street wall from 34th to 40th Streets also makes this tower significantly more visible than 3601 Market and possibly as significant on the skyline as The Summit and Evo. Yet the most damning part of this project, from an urbanist perspective, is that it is the only one of the four with any setback, though a minor one, only in front of the retail shed and a holdout row house that is also set back. It is precisely the row house’s setback that makes the retail shed so noticeable. Having a setback in this context is not necessarily a bad thing, but the row house dictates what the retail shed’s alignment should be. Not matching the setback fragments the street wall (what little of it there is) and contributes to the project’s entire architectural theme of disharmony. In time it may become less noticeable–especially once the patio that occupies the setback is filled with outdoor seating–but the architecture and urbanism of this project fail to meet the challenge its complicated site presents.

That said, it is not an antiurban structure like the retail-pad bank that faces it across the street. 38Chestnut does contribute to 38th Street’s rapidly accreting street wall and will hopefully be fully integrated into a similar street wall along Chestnut Street. By the standards of almost anywhere else in the country, 38Chestnut is a highly urban building whose construction would be major stroke of luck. However, this doesn’t mean we shouldn’t have a higher standard here, and as all four of these buildings prove, we do. 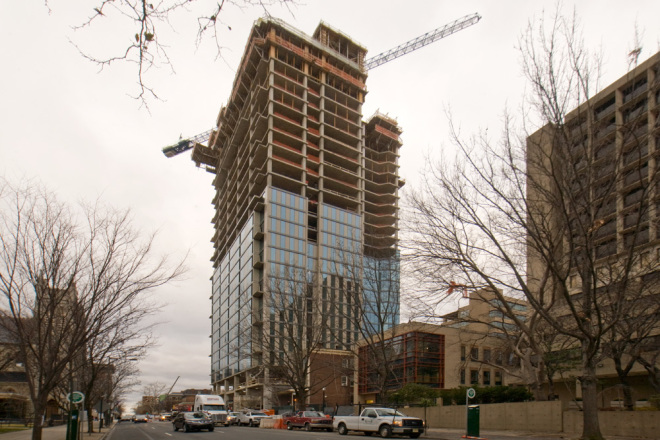 38Chestnut pushes its way into the fold | Photo: Bradley Maule

University City is blessed with an unusual plethora of sight lines, especially ones not terminated by City Hall, and three of these structures anchor major sight lines–all high-quality additions to our expanding skyline and thick-knotted urban fabric. We do not find failings as drastic as we find elsewhere in the city here, but nobody is perfect, no project is perfect, and each of these sites must grapple with their own unique challenges.