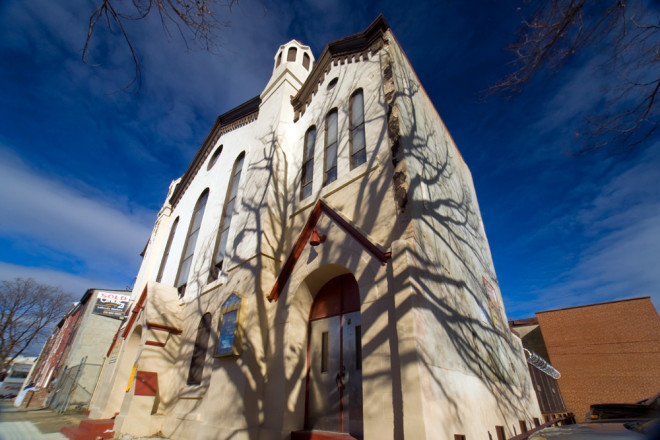 Beginning on or about today, another chunk of Fishtown’s workingman’s history goes the way of the shad fishery, staging the ground for another chunk of New Fishtown. Demolition of the modest but attractive 163-year-old Pilgrim Congregational United Church of Christ, just off of Frankford Avenue at Marlborough and Belgrade Streets, is scheduled to begin today to make way for five new townhouses.

Say what you will of Fishtown’s ongoing transformation, but it’s hard to deny claims of Brooklynization when the developers are called Greenpoint (as reported by Naked Philly in October). However, the homes epitomize something far more Philadelphian: the casual demolition of an aged neighborhood structure—close but not historic enough.

Developers aren’t stupid, especially when the real estate sizzles as it does in Fishtown. While examples exist of churches saved and remade (including here in Fishtown, such as the former Siloam Methodist Episcopal Church and the former East Montgomery Methodist Episcopal Church, at the corner of Frankford, now apartments and art space), they tend to be the exception. It’s just much easier and cost effective to take a church that occupies a large chunk of a residential block, tear it down, and make the one large chunk into five smaller, single-family-size chunks. It continues to happen over and over because no survey exists to even acknowledge the thousands of historic structures spread across the city, let alone protect them. 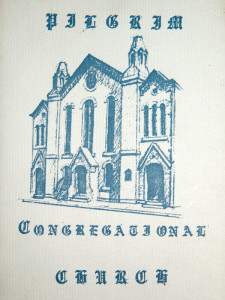 The effectiveness of the Philadelphia Historical Commission has come into question frequently in recent years—see Boyd Theatre, Levy-Leas Mansion, Church of the Assumption—enough that City Councilman Jim Kenney has proposed allotting the Commission an extra half-million dollars per year to add a thousand buildings to the Philadelphia Register of Historic Places. As Kenney told the Inquirer, there are thousands of Philadelphia buildings on the National Register that don’t appear on the local register. In the same story, the Commission’s executive director Jon Farnham admitted, “we don’t have a comprehensive survey of all historical properties.”

Isn’t it time Philadelphia had one?

Ashley Hahn made this very case for Plan Philly in October, advocating that a survey is the best starting place for that money. That a major city whose history is at its core maintains a historical commission without a comprehensive inventory is mind boggling, in terms of best practices, in terms of standard operating procedure.

In the 1980s, a project called the Clio Index began such a comprehensive survey, but it only got through Center City (namely Old City and Society Hill) and parts of Germantown and West, South, and North Philly before running out of funds. So funds are needed, and $500K is a good starting point. Does the rest, as Hahn’s piece suggests, come from foundations? Can the work be done as a joint project of university preservation programs? There is a way, and the Historical Commission has to find it.

Until it does, developers will continue to snatch up sizable buildings, make the easy case for demolition, and the Hidden City Daily will continue publishing an annual list of “Lost Buildings.” (This year’s will be published on or about New Year’s Eve.)

Unless demolition wraps up by midnight next Wednesday, Pilgrim Congregational Church will appear on the 2015 list. 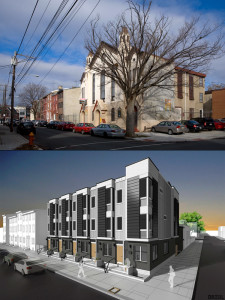 Before, after | Photo (top) by Bradley Maule; Rendering (bottom) by Paul Drzal, via Naked Philly

According to Kensington historian Rich Remer, Pilgrim Congregational Church traces its origins to an 1825 revival at Richmond and Shackamaxon Streets. That year, the congregation was organized as the Union Wesleyan Church of Kensington. In 1830, the church acquired a section of the Hanover Burial Ground. (It closed in 1922 and eventually became Hetzell Playground.) In 1837, they purchased a site two blocks from the cemetery along Marlborough Street at Belgrade. Now known as First Associated Methodist Church of Kensington, the congregation built a small brick church in 1838.

In 1851, the church changed its denomination to Independent Church, and the current building was begun for the new First Independent Christian Church of Kensington. In 1870, the brick building was enlarged and a stone façade installed. In 1897, the congregation was formally recognized as the Pilgrim Congregational Church, which it remained until merging with St. Michael’s Lutheran Church earlier this year, selling the building at 1403 Marlborough Street in the process. (The City’s Office of Property Assessment listing for the address still shows ‘Pilgrim Community United’ as the owner.)

Its architect has been lost to history, but the church lived its life a handsome, Italianate Revival citizen of the Fishtown/Kensington fabric. While not quite as elaborate, its round-headed windows and corbeled cornice recall the Tenth Presbyterian Church at 17th & Spruce, designed by John McArthur, Jr. more than a decade before his City Hall began to take shape. In its 1870 construction, Pilgrim’s façade featured a serpentinite stone; that stone was covered in the 20th Century by a brown parging, itself covered in white and off-white paint that remains.

Beginning today, the brick, serpentinite, parging, and paint will come down. In the church’s place, five modern townhouses will rise, built by-right to the maximum 38′ height, including roof decks. A sixth home was proposed but rejected by neighbors as excessive.

Best to get a look at Pilgrim Congregational Church while you can, because it’ll soon be gone. And while you’re in Fishtown, you might want to swing by the mid-19th Century East Baptist Church and Edwin Forrest Durang’s circa-1890 St. Laurentius Roman Catholic Church. Owners’ plans to transform East Baptist into 15 apartments were voted down at a Fishtown Neighbors Association meeting in October and the building remains vacant. The Archdiocese of Philadelphia decertified St. Laurentius in September and removed historic and sacred objects last month. A friends group has been created with hopes to save St. Laurentius Church. Like Pilgrim Congregational Church, both churches are historic, but unprotected. Each passing day as an empty structure inches each a little closer to the wrecking ball.

Better still, make a day of it this Sunday and visit numerous historic holy sites in the neighborhood with the New Kensington Community Development Corporation’s holiday bus tour. Tickets are still available and can be purchased HERE. 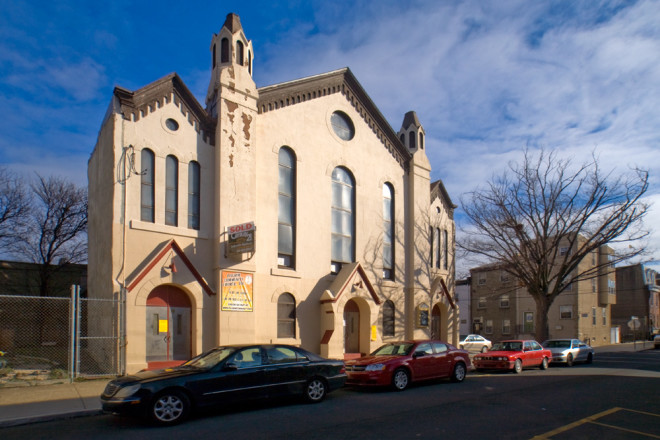 * * *
The author owes a debt of gratitude to Aaron Wunsch for his assistance in this story. Wunsch teaches historical research along with John Hinchman (drawings) and Joe Elliott (photography) in the Recording and Site Analysis course (HSPV 601) for the University of Pennsylvania’s Preservation program. In spring 2014, the class, consisting of students Jennifer Carr, Mary Feitz, Courtney Magill, Grey Pierce, Lauren Shaughnessy, profiled Pilgrim Congregational Church.

The author would also like to thank Kensington and Fishtown historians Rich Remer and Ken Milano for their insight.