In Fairmount Park, “Unsurpassed” Collection Of Mansions Dressed For The Holidays 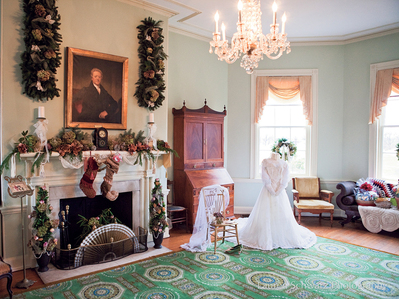 Fairmount Park contains dozens of buildings–from barns to villas–that document Philadelphia’s architectural evolution through the 18th and 19th centuries. The villas, mostly situated along the bank of the Schuylkill River, are the largest and finest group of authentic colonial and federal houses in the country.

The villas were erected by wealthy Philadelphians as country seats or rural retreats from the city’s heat, noise, and congestion–and disease epidemics that plagued the city in the 18th and early 19th centuries. Some of the villas functioned as working farms and included dairies, orchards, extensive fields, and game lands.

As the Italian architect Andrea Palladio had suggested in the 16th century, the design and siting of Schuylkill River villas was intended to take full advantage of vistas, so that “the mind, fatigued by the agitations of the city, will be greatly restored and comforted, and be able quietly to attend the studies of letters, and contemplation.” The orientation of a villa took into account the prevailing winds to allow for cross ventilation, while floor-to-ceiling windows enabled residents to overlook their property. When owners demanded easier access to patios and gardens, large French doors (“jib windows”) were installed at ground level.

Purity, Preservation, and The Park

19th century expansion of the city put villas at risk, much as similar properties on the outskirts of Boston, New York, and Baltimore. In Philadelphia, the creation of Fairmount Park, meant to protect the city’s drinking water and provide a place for leisure and recreation, saved them. Starting with the acquisition of Lemon Hill in 1844, Philadelphia officials assembled the park by piecing together the largest estates. 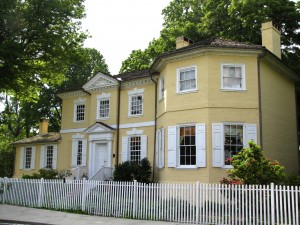 Many of the Fairmount Park mansions were restored in the mid-1970s and are furnished with authentic antiques to reflect the personality and interests of their previous owners. They range from the Quaker simplicity of Cedar Grove to the immense Strawberry Mansion.

Laurel Hill Mansion, in East Fairmount Park at the far end of Randolph Drive near 33rd and Diamond Streets, was built as a summer home in the Georgian style. Both the mansion and Laurel Hill Cemetery took their names from the boughs of laurel that once naturally grew along the east bank of the Schuylkill River. The first American discovery of wild truffles happened on Laurel Hill Grounds. At the time, the villa was occupied by the Chevalier de la Luzerne, the minister to France. His French cook had a truffle-dog that sniffed out and dug up the delicate mushrooms usually found near the roots of oak trees. It is possible that truffles may still be found on the adjoining lawn at Laurel Hill.

Many 18th and early-19th century villas of Fairmount Park are open to the public for tours. Holiday programming, along with tours and events throughout the year, helps pay for ongoing maintenance and preservation.

For more information about tours and holiday activities, visit The Charms of Fairmount Park’s website HERE.