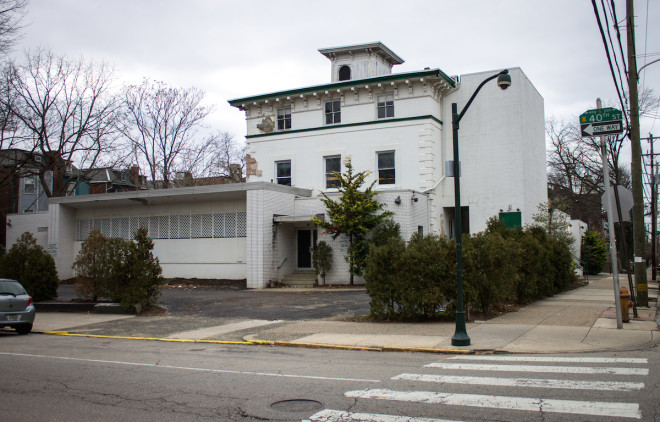 The Historical Commission’s Hardship Committee voted this afternoon, on a potentially precedent-setting ruling, to clear the way for the immediate demolition of the Samuel Sloan-designed mansion at 40th and Pine Streets. The Committee’s recommendation goes before the full Commission for vote on January 9, 2015. The mansion is listed on the Philadelphia Historic Register–and therefore protected by law from demolition. However, in May, 2012, the Commission granted the property’s owner, the University of Pennsylvania, economic hardship, allowing them to demolish the building. The latest iteration of plans for the property–of many proposed over the years–is apartments, to be built by Azalea Gardens Partners, LP. Today, the Committee ruled to recommend that Penn doesn’t have to wait for an upcoming appeals court ruling on the case, nor for any other permitting on the property, before taking it down.

At one point in the debate about the ruling Committee member Robert Thomas wondered what might happen, therefore, if the proposed project doesn’t proceed. “What if the project doesn’t go through?” he asked. “What do we have? A vacant lot?”

Thomas’s point led to the stipulation that Penn will have to take care of the property during the year or so before construction begins. However, for preservationists, the ruling is ominous, particularly on the day when it was revealed that the art deco Boyd Theater, in Center City, which the Historical Commission recently ruled could be demolished, might be saved through a new development proposal. Had the previous owner of the Boyd gone through with demolition at the time of the ruling, instead of waiting to be sure his proposed project was feasible, the theater’s latest potential resurrection would be moot.

It has been a long, complicated saga for the John P. Levy House at 40th and Pine. As Hidden City co-editor Peter Woodall reported in detail in 2012, the University of Pennsylvania and their partner developers sought to demolish the West Philly Italianate mansion after a 2007 proposal to preserve it as part of a hotel tower was rejected by neighbors.

Speaking on behalf of Penn–which is responsible for the care and upkeep of the vacant building, costing an estimated $30,000 a year–Attorney Mathew McClure maintained that the building’s “continued presence in the area is a blight” and that demolition should be an option with or without an approved permit to build. “After zoning litigation and appeals run their course we believe we should be able to proceed with demolition,” said McClure.

The Commission approved McClure and Penn’s recommendation of the removal of the condition.

Up for consideration but ultimately not approved was the condition that the building not be demolished before litigation to reverse demolition approval goes before the Commonwealth Court on February 9th, effectively leaving the building vulnerable to being razed before the court case.

Woodland Terrace homeowners’ attorney and attendees advocated for keeping the condition in place, expressing both the historic value of the Sloan building, as well as the negative precedent that will be set for fast-tracking future demolition of historic properties in West Philadelphia. The Commission disagreed, stating that the John P. Levy House–currently on the city’s Register–no longer has historic value due to it’s many non-historic additions. “The building has been compromised,” said Commission member Dominique Hawkins. “There have been so many changes that it is inappropriate being on the city’s Register.”