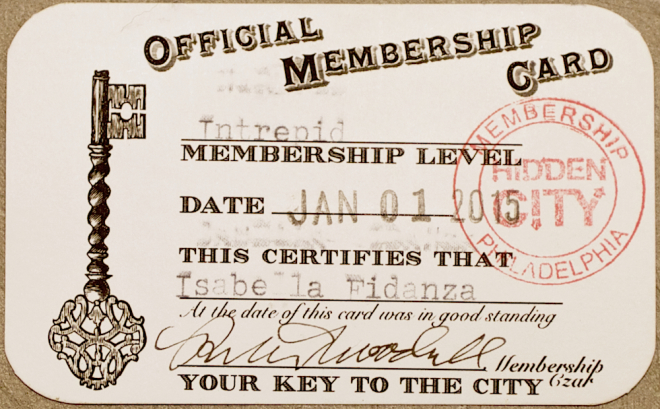 Naturally, we had to print our new Hidden City membership cards (which go in the mail next week) on a vintage copper plate engraving press in Fishtown. Copper plate printing allows for fine lines and raised ink—we wanted the cards to look and feel authentic, to be something worth having. And we wanted to give you something tangible for becoming a member (which you can sign up for HERE). After all, membership in an organization like Hidden City is quite an abstract concept.

We brought our job to Marcus Benavides, an artist and commercial printer who runs Fishtown Engravers out of an old print shop on Frankford Avenue. The space is filled with the battleship-gray paper cutters and copper plate printing machines operated by large steering wheels, which Benavides acquired when he took over the space earlier this year. Upstairs are the editorial offices and writing workshop of the Head and the Hand Press. 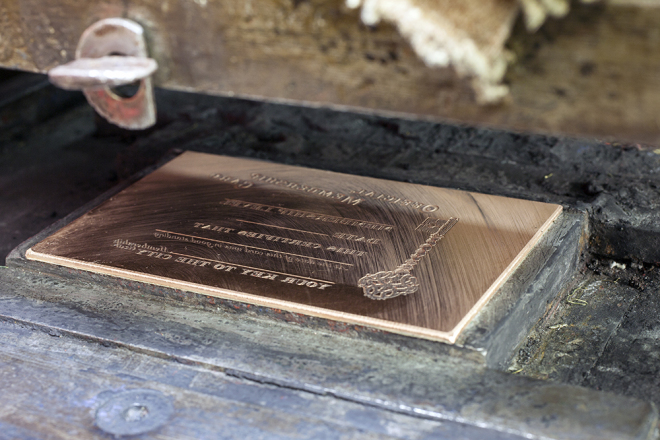 The craft of copper plate engraving and printing marries the old and the new. Rather than having an individual hand-engrave the copper plate with a burin, we designed our membership card on InDesign and Illustrator. The design was then sent to a computer that read it and reproduced it on the copper plate. Benavides fed the copper plate into a machine that stamped the ink out of the recesses onto the paper with three thousand pounds of pressure.

The printing must occur in one sitting—a session that Peter Woodall had a chance to photograph. It’s possible to tell the skill of a printer by the depth of the impression—or “bruise”—at the back of the paper. A shallow bruise indicates an experienced printer who knows the exact amount of pressure to apply. As Hidden City members will find out, Benavides evidently has the magic touch.

First Marcus makes an initial series of cuts to the paper using what’s called a guillotine. It is one very serious piece of equipment! He’ll make more cuts after he’s done printing. The rounded edges were done later at the Printer’s Place on Walnut Street.

The engraving machine stamps the paper down onto the etched copper plate with about 3,000 pounds of pressure.

Here’s what the back of the machine looks like in action. The brown roll of paper you see near the middle of the machine is used to blot the copper plate between impressions.

The rollers continuously take up and return ink from a reservoir located in the back of the machine. Thinning out the ink to just the right point where it will print without sticking requires an experienced hand.

The squeaky wheel quite literally gets the grease. 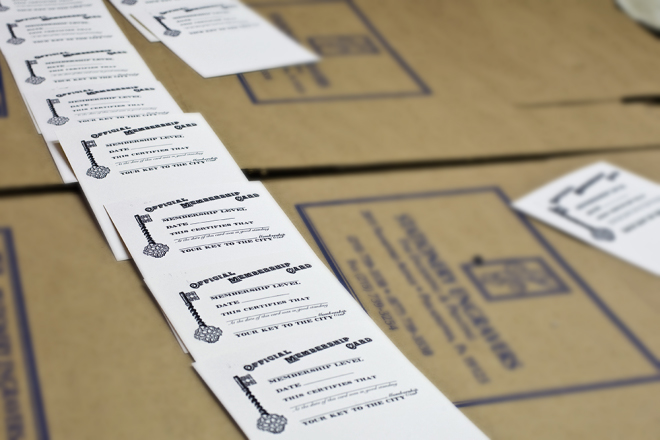 The cards must be dried before they can be stacked on top of each other. 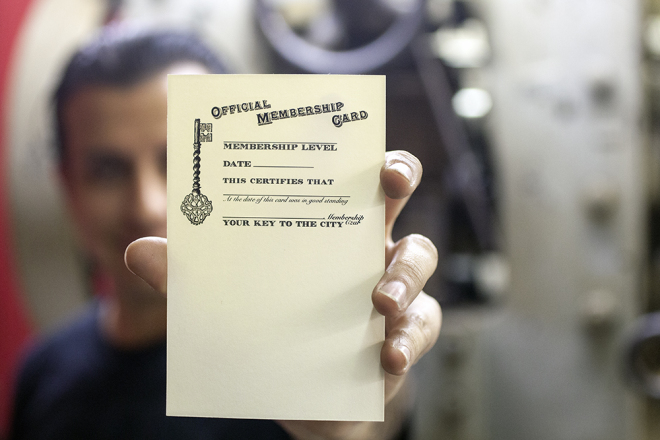 The semi-finished product. After we picked up the cards from Marcus, there were still a number of finishing touches we needed to add to each of the cards. We use a round Hidden City stamp, a date stamp, then we type each person’s name and membership level with a vintage Remington Rand typewriter. It’s time consuming and shockingly loud but there’s no point in creating something retro like this if you’re not going to go all the way! 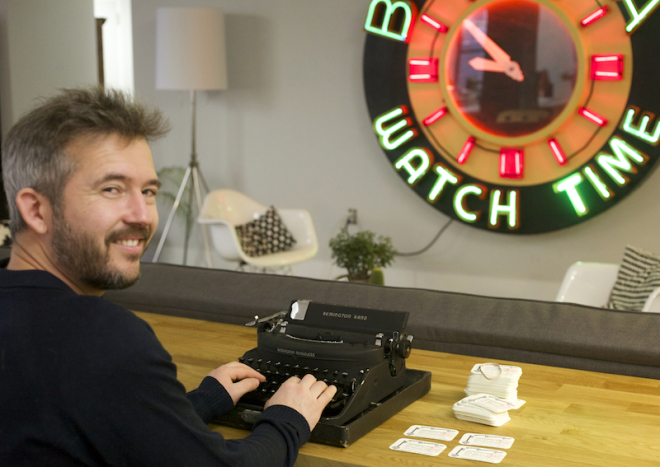