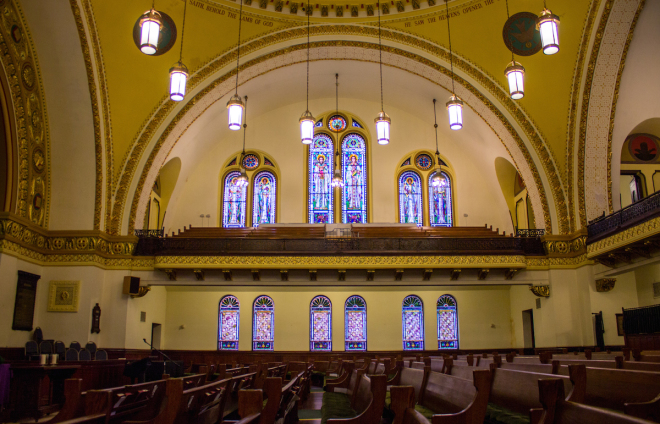 Inside the sanctuary of First Baptist Church at 17th and Sansom | Photo: Michael Bixler

Thirteen churches in Center City will open their doors to the public this Sunday for an exclusive look inside their walls of worship. Sponsored by Center City Residents’ Association, the tour is self guided and free to the general public. Along with tour maps, church leaders and docents at each congregation will be on hand to lead stained glass window tours and answer questions about the history and architecture of their respective buildings.

“The architecture we have inside these churches downtown are extraordinary,” says Stephen Huntington, executive director of the Center City Residents’ Association. “Tens of thousands of people walk by churches like First Baptist [Church of Philadelphia] at 17th and Sansom every day and never get to see the inside.” In their second year hosting the tour, Huntington says Sunday will give the public an opportunity to get an exclusive glimpse of the grandeur inside these historic churches. 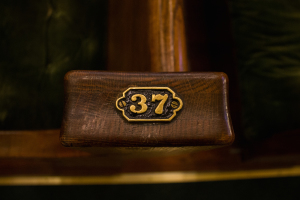 Pull up a pew and take a load off | Photo: Michael Bixler

The open house idea was conceived in 2008 as an offshoot of an interfaith breakfast to bring Center City religious congregations together–a meet-and-greet and dialogue starter. Huntington explains, “A board member of ours, a minister, was retiring. He said that churches here aren’t nearly as collegial here as they are in the Midwest and that bothered him. Churches in Philadelphia seldom talk to each other and he wanted to bring them together in some way. We decided to host a breakfast and members from all 18 congregations we invited showed up so it was very successful.” Huntington says that the churches included in the tour see Sunday as an opportunity “to put their best foot forward,” not only in showcasing their beautiful buildings, but also to attract new members.

The Sacred Spaces Open House tour begins at 1PM this Sunday. For a complete list of participating churches see their website HERE.