Time is running out and we need your support. 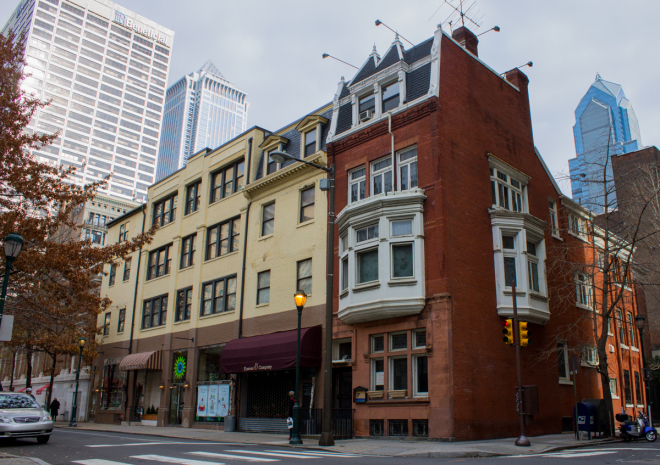 I’ve always been fascinated by the Topper’s Spa building at 115-117 South 19th Street in Rittenhouse Square. Architecturally flat in contrast to the rest of the neighborhood, I figured it must be hiding something interesting.

We have to go back about a century to trace this one. In June, 1917, the National Board of the Young Women’s Christian Association formed the National War Work Council to respond to the needs of women left behind by their spouses who had gone off to fight in the Great War. One hundred women from all classes–poor, young working class mothers to celebrity blue bloods–directed the Council, which created “Industrial Service Centers.” The Centers developed an Americanization program for foreign-born women, providing instruction in “social morality,” and placed women in jobs.

In Philadelphia, most of the women assisted by the War Council went to work at the Frankford Arsenal, Navy Yard, and shipyards at Hog Island. Women from all over the region sought out these job opportunities. But where would they live? The local branch of the YWCA made housing its next priority. The dorm-style residence on South 19th was one of several they constructed at the start of the war. 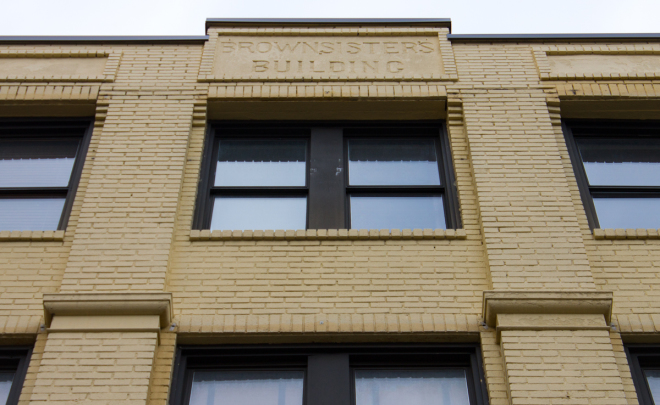 In May 1918, Katherine Kennedy, superintendent of the Philadelphia YWCA, proposed a boarding house at the site of what had been the Jarney family residence on South 19th Street, a block from Rittenhouse Square. The firm of Morris and Erskine was commissioned for the $3,000 building, which would house 40 women. General contractor R.C. Ballinger put the building–to be called the Rosemont House–up over the next year.

Before it opened, Rosemont House had a long waiting list of young women who wanted to move in to what was not only the newest War Council residence, but the best located. The vast majority of residents worked at Hog Island shipyards. 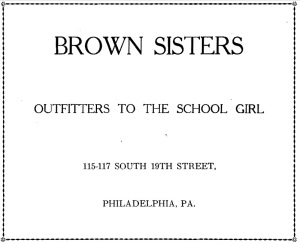 Rosemont House remained a young women’s residence into the mid-1920s, though commercial businesses took over the first and second floors. In 1928, the Brown Sisters Company, which made and distributed school uniforms, purchased the entire building. In business on South 19th Street for a little more than a decade, the Brown Sisters’ name is still engraved at the top of the building.

After Brown Sisters moved out in the early 1940s, the building was sold to J. Hermann Fineman, who left the upper floors vacant and leased the first floor to a short-lived bar called the Hitching Post Tavern. After that establishment failed, John Roventini–Phillip Morris Cigarette mascot “Little Johnny”–opened Little Johnny’s on December 22, 1944, a cocktail bar and jazz joint that would become a local legend.

In its earliest years, a local partnership of Al Levinson, Al Merklin, and Jackie Silver, who ran a bunch of jazz and comedy venues in what was then known as Mid City (now Center City), operated Little Johnny’s. The partnership dissolved but the club held on until June, 1962. Little Johnny’s hosted Bob Dennison, Lenny Payton’s Trio, Bernie Heller Trio, Angie Bond Trio, Pearl Williams, Diana Dale, and Betty Gale. During the club’s tenure at the old Rosemont House, a bartending school took over the upper floors. Eventually, they were converted into apartments. 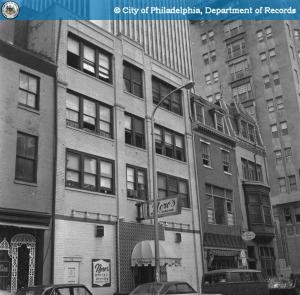 Nero’s on the ground floor in 1971 | Photo courtesy of PhillyHistory.org

Later in the 1960s and 1970s, a series of bars and restaurants–among them Nero’s, Eddie Callahan’s, and Cafe Flora–kept the Little Johnny’s space alive. The upper floors housed art studios until a fire around 1969. In the early 1980s, the movie theater operator Sameric Corp leased office space there and later took ownership of the building, which by this point had been combined with 113 South 19th and 119 South 19th, and housed two restaurants on the first floor. When Sameric was acquired by United Artists in May 1988, the offices changed accordingly.

In the late 1990s, local realtor Leroy Kean took control of the property. Topper’s Salon and Spa has leased the entire building from Kean since 1998 and remains a Rittenhouse Square staple today.