Athenæum Steps Into The 21st Century With “Looking Forward”

From Beirut to the Bronx, professional and student architects from all over the world registered for Athenæum’s Looking Forward contest | Map: Athenaeum of Philadelphia

Tonight, the Athenæum will announce the winners of its “Looking Forward” conceptual architectural design competition in an award ceremony and exhibition opening celebrating the library’s 200 year anniversary. 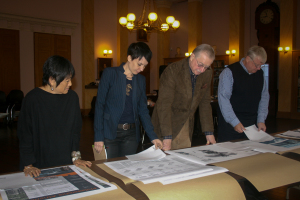 An open call to redesign the Athenæum for the year 2050, “Looking Forward” was conceived as both an open dialogue with designers and opportunity for the distinguished library to introduce future-thinking public programming to end their centennial. “One of the reasons we held the competition was to give both competitors and the public a forum to comment and see the Athenæum as more than just a lovely old building,” says Bruce Laverty, curator of architecture. Conceptually, registrants were required to consider how the library’s massive archive and collection will be accessed in the future while, design-wise, adhering only to the constraints of the 50 ft by 175ft deep lot the building on Washington Square sits on today–a complete redesign of the space after the Athenæum is moved to a quiet spot in Fairmount Park. “Almost all of the entries took two issues into consideration–the importance of our location on historic Washington Square and the role (or lack thereof) of the physical book and drawing in the year 2050,” says Laverty.

Unlike anything the architectural archive has done before, the Athenæum hopes the competition and programming that follows will push the library into the 21st century. “It really is a jumping off point,” says Laverty. We’re even live streaming the awards presentation.” One of the big questions circulating the roundtable at the library while throwing ideas around was how far to go into the future. “At first we considered something pretty far like 2114, but that was too far ahead. We compromised on 2050. That way, some us at the Athenæum might still be alive to see it happen,” says Laverty. 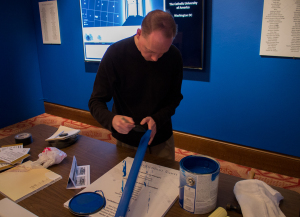 Judging by the number of entries, the competition generated a considerable amount of interest. Within the first 20 minutes of opening registration online someone had registered. “We were impressed by the breadth of entries. From Center City to Cyprus, from Port Richmond to Paris, from South Philly to Shanghai,” says Laverty. Entries came in from 17 countries, 15 states, and 10 schools—out of the 122 professional and student registrants 46 professional architects and 42 students submitted. “Needless to say we were very pleased but surprised,” says Laverty.

Armed with an all star jury that included Billie Tsien, Michelle Delk, Roger W. Moss, Laurie Olin, and C. Ford Peatross, the idea for the competition was conceived only last December. Laverty says that getting the global competition off the ground required lots of help from the architectural community, a dash of serendipity, and an endless amount of energy. “Most of our success with this thing was like that old Penn Dutch saying, ‘The harder we work, the luckier we get’,” says Laverty. “Everyone that we contacted for help and insight came through. And we had the best jury possible and they really helped us see things though. We knew we wanted a team of experts, particularly with library design backgrounds,” says Laverty.

After the awards are announced tonight the winners’ design drawings will have the high honor of taking their place inside the library’s legendary collection of 220,000 architectural drawings, archived among the Furness collection and the 17,000 renderings by Cret.

The awards presentation and exhibition opening for “Looking Forward”tonight begins with a reception at 5:30pm at The Athenæum of Philadelphia, 219 S. 6th Street.