Editors Note: The Athenæum of Philadelphia has announced the winners of their Looking Forward: Re‐Imagining The Athenæum of Philadelphia conceptual architectural competition. As we reported earlier this month, entrants were challenged to the task of rethinking how users will access the library’s collection in the year 2050, designing a facility that both fits within the dimensions of the institution’s current location on Washington Square and aligns with the Athenæum’s core mission. The competition–the first the Athenæum has sponsored since 1840–was developed as both a celebration of the library’s bicentennial year as well as a way to initiate dialogue about the institution’s identity and advancement in the 21st century. Presented below are the conceptual architectural drawings and project statements of all eight winners of the competition.

The Looking Forward: Re-Imagining The Athenæum of Philadelphia Exhibition gallery exhibition–which includes large-scale renderings and 3-D models–is now open to the public and will run until February 14, 2015. Gallery hours are are 9:00AM-5:00PM, Monday-Friday and on the first three Saturdays of the month from 11:00AM-3:00PM. The Athenæum of Philadelphia is located at 219 South 6th Street. 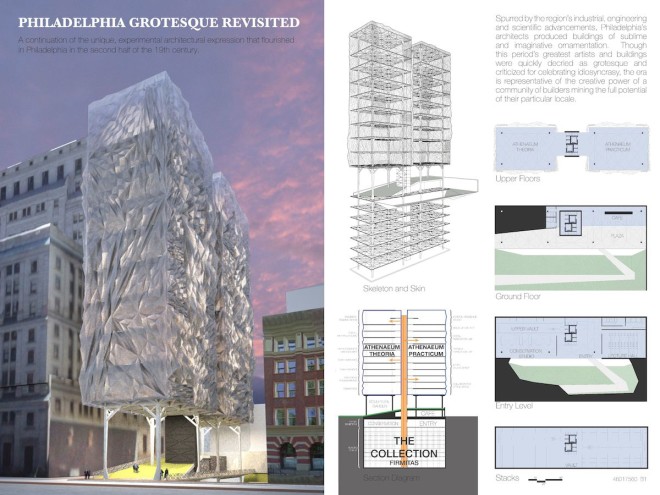 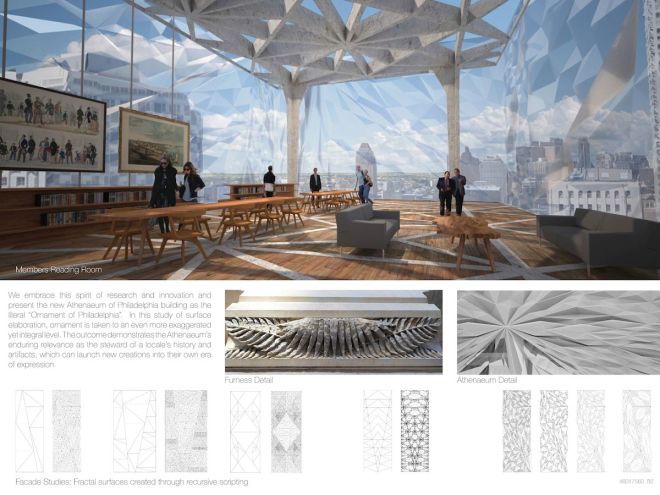 Project Statement: The particulars of the Athenæum, Philadelphia, and the future of information technology were all important considerations in our design for the Athenæum’s Looking Forward competition and they each affected our design volumetrically, programmatically, and aesthetically.

Volumetrically, we envisioned a much larger building for the future home of the Athenæum based on what we see as the growing needs of the institution and our city. The design is based on the assumption that the electronic aspect of information technology will continue to evolve in unexpected ways, but the value of physical historic artifacts can only increase.

The building’s size is also driven by a belief that urban density improves quality of life by increasing opportunities for interaction, cultural enrichment, and exchange of ideas. After the creation of the National Historic Park, the area surrounding Washington Square is particularly in need of densification.

Programmatically, the design is divided in three sections. The Athenæum’s collections are stored deep underground for protection and climate control. The artifacts are accessible both physically and digitally through a trunk, which feeds two building sections. One is the theoretical arm for research, education and other traditional library programs. The other is the practicing arm, a studio space for architects, designers, and artist who access the collections regularly as source material for their work. The three sectors of the building are a physical representation of the intertwined cycle of learning, invention, production and documentation inherent in the practice of design. As globalization continues, the Athenaeum’s focus on Philadelphia, a specific location on earth, is itself becoming unique in the field of knowledge and information collation and management making the institution increasingly attractive and relevant.

Aesthetically, this project’s physical form is a continuation of the unique and experimental architectural expression that flourished in Philadelphia in the second half of the nineteenth century – we call this period “Philadelphia Grotesque.” Spurred by the region’s industrial, engineering and scientific advancements, Philadelphia architects Frank Furness, Willis G Hale, Thomas P. Lonsdale, George Pearson, and others produced buildings of sublime and imaginative ornamentation. Flamboyant, idiosyncratic, and experimental, their works were brutally scorned by the national architectural press for decades, effectively intimidating our city into neglecting and demolishing some of the most important buildings from this period. This period of architecture is now treasured, as the appreciation for its beauty and weirdness has grown enormously.

The lesson here is that we certainly can’t trust any generation with valuing another’s architecture. Because the Athenæum’s mandate is archival, it is more immune to the whims of a particular era’s tastes. It preserves not just what is old, but also what became temporarily distasteful, out of fashion, or obsolete.

In reaction to the “Looking Forward” brief, we embrace the spirit of research and innovation and the inventiveness of brash and challenging forms by presenting the new Athenæum building as the literal “Ornament of Philadelphia.” In this study of surface elaboration, ornament is taken to an even more exaggerated and integral level. We hope that the outcome demonstrates the Athenæum’s enduring relevance as the steward of a locale’s history and artifacts, simultaneously past and future-oriented, and helping to launch new creations into their own era of expression.” 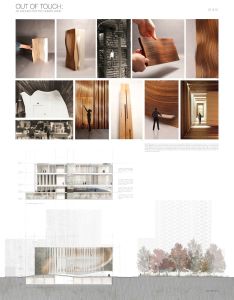 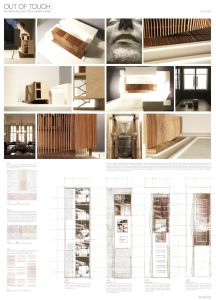 Project Statement: Architecture’s growing dependence on digital technology during the creative process reminds us of some stark realities for the future of the Athenæum. If by 2050 drawings have been reduced to bits of information at the scale of the pixel, then the most common measure of the archive would be the megabyte. The virtual space of the hard drive would replace our experience of the library. This is symptomatic of the digital era, where the real thing is often substituted by its duplicate. As a result, we believe that the digitally immersed future will require a sanctuary for human intuition rooted in tactile processes.

Our proposal for a new Athenæum is dedicated to the exploration of design practices guided by the human hand. It is organized around the idea that we can gain access to the past through what we make in the present, while what is made today can be archived for future generations to access. This cyclical process resonates with the structure of memory and forms the foundation of our programmatic strategy. Our project has a strong focus on the visitors embodied experience of the library and our models and drawings represent consolidated ideas about structure, materiality and light. In the broadest sense, we strived to create a building out of touch: highly textured, rooted in craft and contoured to evoke abstractions of the human body.

Stay On The Ground
Let Your Mind Rise

Project Statement: Libraries of the future would have to fulfill variable needs of locals, offering indoor and outdoor spaces to education, recreation and community activities. These institutions would connect everyday life activities as a place between home and work, especially in the case of Athenæum which is situated on the border of residential and business areas. The architectural library of Athenaeum as an emphasized building “a pride and ornament” of the built environment would have to function smartly and sustainably focusing on variable spaces supplemented by new storage and operation methods.

Library storages are usually situated in unseen underground rooms, closed from visitors, isolated from outside world. I placed this unit in a new disposition. The library storage is bursting skyward–symbolizing the value of knowledge–managed by automated movement system controlled by visitor’s requests. Through the glazed façade the hole moving system become visible. This towering volume with the uncountable books and drawings could be the pride and ornament of Philly in 2050.

One of the most important parts of the proposal is that a new public space was imagined on the ground floor in contrary currently almost the full site is built-in. It functions as an outdoor library space and connects neighboring residential areas to the Washington Square Park. The so called Square of Athenæum hosts different programs and offers spaces for chatting, playing, chilling, and reading. Loud functions are situated near the entrance, reading zones placed at the rear of the site ensuring more privacy.

The multifunctional interior of the Athenæum is lowered in the ground, separated by atriums and sliding doors, provides human scaled intimate space for reading. Lobby functions, reading zones, digital image zones and education areas pattern the lower ground floor. Natural light comes through the glazed walls of the entrance and atriums. An outside theatre – most exciting place of the project – connects the three elements, the glazed storage tower, public square and interior zones. 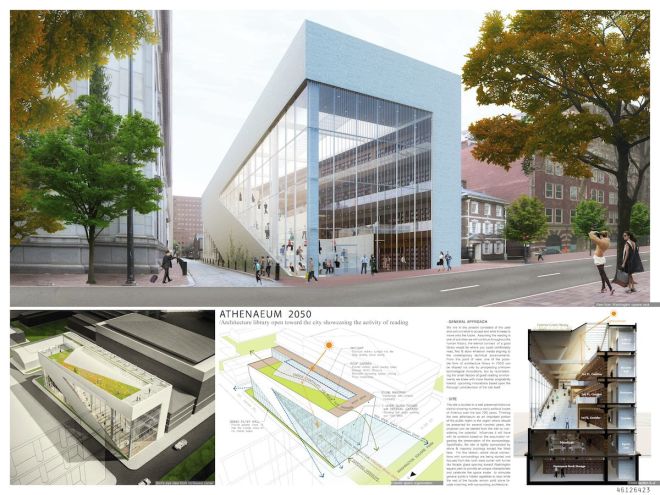 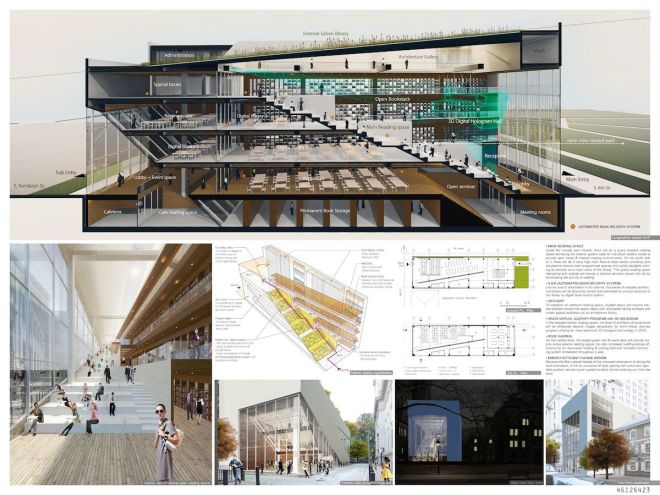 Project Statement: Based on the assumption about the perpetuity of the reading activity and the preservation of Athenæum as an important public venue in this historical district, Athenæum 2050 can be shaped not only by prospecting technological progress, but by reconsidering the small factors of reading environments with considerations of site and adaptability toward upcoming innovations.

By activating the visual connections with surroundings through the open facade toward Washington Square Park, the new Athenæum will showcase the reading activities inside and emanate positive stimuli toward the city. The rest of the facade remains solid stone maintaining the heaviness matching with surrounding architecture.

Project Statment: Our general thoughts on the future of the current informational development were of a dystopian kind. In that context Athenæum of Philadelphia has always been a place of knowledge transfer for the past two centuries and it will keep it’s position in the future as well. What will change is the access to parts of this knowledge. This current and continuous stream of information, such as social-, vital-, life-, news- and statistic-self optimization-feeds, will shortly become overwhelming.

Therefore new Athenæum will embody the anti-thesis to this development by generating a place of disconnection and focus. It’ll disconnect itself from the digital buzz of everyday life, with its knowledge and its physical appearance: The lifted and stacked structure will focus the attention of its users by fading out the surrounding interferences of the digital age. The surroundings will fade out each step on the way up in the tower of the Athenæum. Thus creating a place of study and a retreat from the all-available information overkill as an analogy of a wellness oasis of today. The new Athenæum will be a place of slowly gained wisdom. 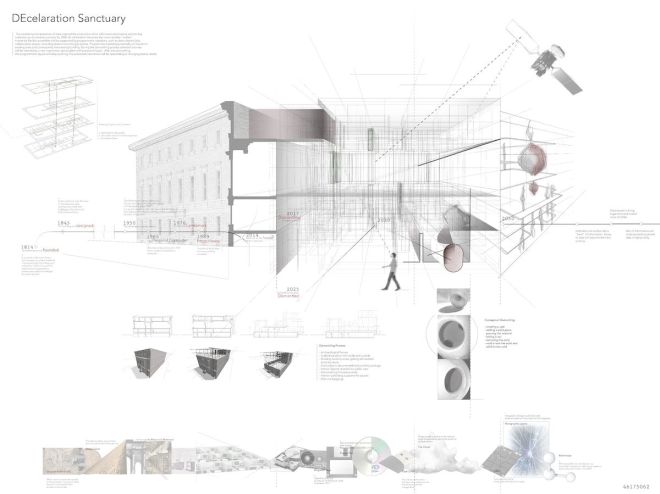 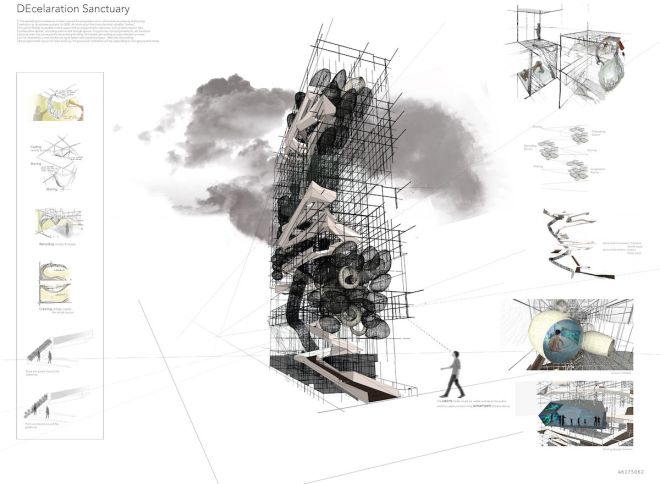 Project Statement: The escalating omnipresence of data inspired the proposition of an information processing and storing institution as an extreme scenario for 2050. As information becomes the most valuable “matter”, it must be flexibly accessible and be supported by programmatic injections, such as data creation labs, collaborative spaces, recording stations, and storage spaces. From a conventional library the Athenæum evolves into a tool allowing users to create data and store them within the building’s structure. Programmes injected parasitically will transform existing ones and consequently the existing building. Data conversion from analog to digital makes information a virtual substance that is coded into particles of a building material resulting in the structure acting as the main storage. During the dismantling process selected volumes will be retained by a new mechanism. A structural grid introduced as scaffolding during the existing building’s dismantling process becomes the movement axis for a 3D anti-gravity printer that is being fed with material containing coded information. After the dismantling, the programmatic layout will keep evolving; the proposed mechanism will be responding to changing spatial needs. The proposal continuously provokes experimental and adaptable spaces. 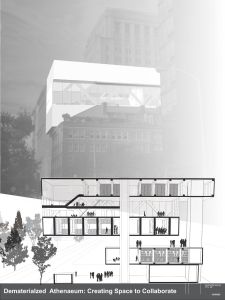 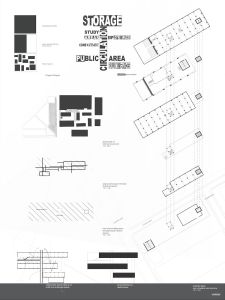 Project Statment: Taking from the informality of the adjacent Washington Square Park, the New Athenæum will be a dematerialized building, creating an informal definition of space and movement. Providing more collaborative and interpersonal spaces while allowing for unpredictable growth of both program and collection in the future. The people are connected by the information stored on dynamic levels, holding Philadelphia’s history, yet allowing the movement to let the history out into the city with people. The dynamic levels are both holding the storage and the building as these layers are usable storage. 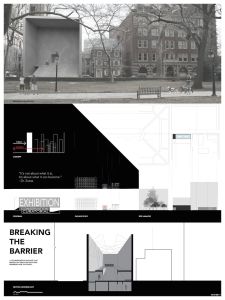 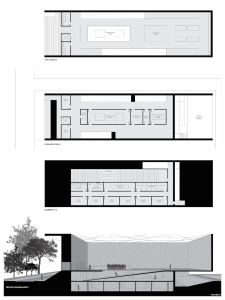 Project Statement: The public sees the Athenæum of 2050 as a mysterious space. The facade gives the appearance of a very heavy building, but once the user has passed through the doors they are instantly freed of the heaviness an surrounded by openness and light. The member has the privilege to experience this phenomenon, as well as travel to the lower levels to interact with historic documents that can only be seen in physical copy. As with the historical Athenæum, the public’s interface with the building is through the facade, which progressively changes throughout the day to become a completely new building by nightfall.