A North Philly Building’s Direct Connection To The Past 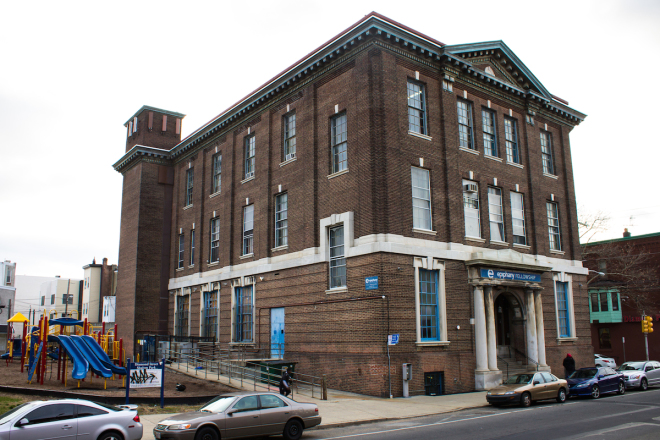 Celebrated Philadelphia architect John Torrey Windrim designed over 60 buildings for the Bell Telephone Company over a period of nearly 30 years, interspersed throughout the city. Many remain–and a small few, like the exchange near 52nd and Lancaster, are still in use. This one at 17th and Diamond in North Philadelphia, however, stands above the rest–not only because it’s one of Windrim’s earliest for the phone company, but because the succession of uses and reuses tell us so much about the city itself.

The neighborhood around Diamond Street west of Broad grew rapidly between 1875 and 1900 with the expansion of streetcar lines. The nouveau riche had a fleeting attraction to the area; at the turn of the 20th century, developers began splitting up their mansions. It was around that time that Bell Telephone sought to enhance its service to the neighborhood (and others) with a large telephone exchange building. It would be one of at least three designed by their new company architect, John Torrey Windrim, in 1906, and among the earliest he worked on.

In 1907, the company demolished a batch of large row houses at 1632-1638 Diamond Street and put up a 19,200 square foot facility constructed by the Charles McCall Company. The building opened as the Diamond Street Bell Telephone Exchange (Diamond Exchange for short) in 1908. This exchange, however, was unique among most of the others of its type. Only a few years after opening, it became one of three “collection offices” with a direct line to the Bell Telephone’s pre-Parkway headquarters at 1230 Arch Street. Windrim would go on to design Bell Telephone-related buildings across the nation until his death in 1934. 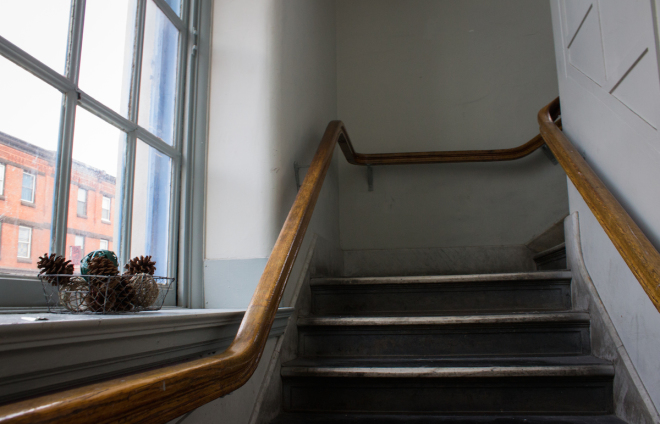 Much has been remodeled on the inside, but the central stairwell remains the same (and is quite the hike) | Photo: Michael Bixler

The Bell Telephone Company made use of this gorgeous facility until August, 1933, after which it stood vacant for two years. In 1935, the Eckels College of Embalming (later Eckels College of Mortuary Science) proposed a massive conversion of the interior space into an “undertaker school.” Though initially rejected by zoning, the overhaul was eventually completed by Franklin M. Harris & Company. Eckels converted the first floor to classrooms, the second floor into a large lecture hall, and the third floor into embalming fluid manufacturing center. In the basement, the college installed a 1,500 gallon storage tank for the fluid that was produced and used by the organization.

Eckels moved into its new 17th and Diamond home from its original location in a set of old row houses on the 1900 block of Arch Street (just recently demolished for the construction of Phase 2 of PMC Property Group’s 1900 Arch apartment building). The Eckels College of Mortuary Science originated there in 1895, founded by chemist Howard S. Eckels, whose products and instruction sought to ameliorate the apparent health concern of the dead bodies decomposing in urban graveyards. After moving to 17th and Diamond, the school became affiliated with Temple University and continued after World War II under the leadership of Eckels’ son, John. The Eckels College still exists today as Eckels and Company, based in Guelph, Ontario, Canada, with offices in Australia, Puerto Rico, Belgium, and Livonia, Michigan. They currently produce a large variety of urns.

In 1949, Henry D. Horner, deputy grand master of the Prince Hall Masons of Pennsylvania, arranged the purchase of the building and had it completely overhauled again over the next four years into the Prince Hall Masons First Masonic District Temple. The Prince Hall Masons moved there from Benjamin Banneker Institute at 409 South 11th Street, where the organization had been located or a century. 2,000 Prince Hall Masons from all around the country came to Philadelphia for the opening of the Diamond Street hall, in 1954. The new Temple held six lodge rooms, a kitchen, recreation areas, a banquet hall, and a “colation room.” There were also offices for the Grand Master, District Deputy Grand Masters, and the secretaries of the Mortuary Fund and Temple Association.

The many local lodges of Prince Hall Masons made thorough use of the building until 1975, when they moved to the former W.L. Elkins Masonic Orphanage for Girls at 4301 North Broad, where the Prince Hall Masons are still located today. The 17th and Diamond building was then acquired by the City of Philadelphia. 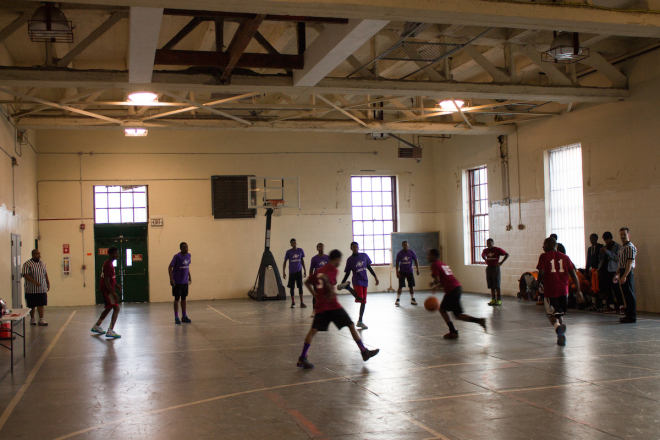 The third floor, once used to manufacture embalming fluid, has been loosely converted into a gymnasium | Photo: Michael Bixler

In 1979, the old telephone exchange was purchased by the Eastern Mennonite Board of Missions and Charities for the Diamond Street Mennonite Church through the City’s Gift Property Program, which offered vacant city property to non-profit organizations with a viable plan. The church needed only to pay a title transfer fee of $13.50 to attain ownership. After another significant overhaul, the building reopened as the new Diamond Street Mennonite Church (the congregation had moved from 191 Diamond) and doubled as the Diamond Street Community Center, offering a large array of services for the neighborhood. Over the next two decades, the church and community center provided the surrounding neighborhood with a health clinic, a program for seniors, a Habitat for Humanity office, a youth counseling, a career center, and offered a rentable event space.

In 2008, the old Diamond Exchange was sold for $650,000 to the non-denominational Epiphany Fellowship, which still operates there today. Though attempts to add this fine building to the National Register of Historic Places have failed, it is designated as a contributor to the Philadelphia Register’s Diamond Street Historic District.