Lost In The Shuffle: When Registered Buildings Go Down 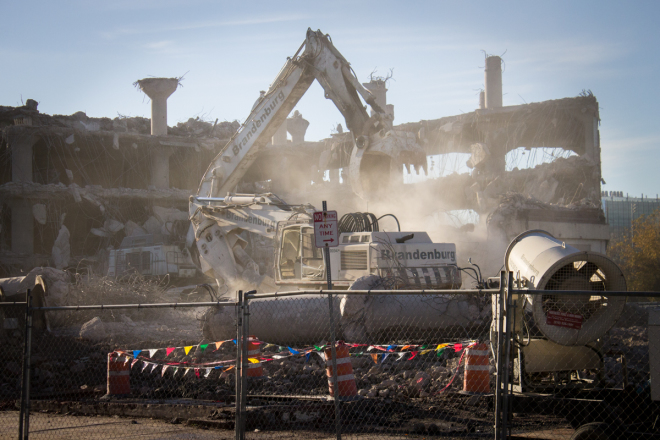 The John F. Kennedy Vocational Center was added to the National Register of Historic Places in 2004. It is now a massive demolition site | Photo: Michael Bixler

Since 1966, with the creation of the National Register of Historic Places, the federal government has sought to determine what from our past is worth saving. Of the 90,000+ sites on the Register, almost 600 of them are in Philadelphia. Unlike the Philadelphia Register, the National Register doesn’t protect a building from demolition, but the status it confers makes buildings eligible for state and federal tax credits. Moreover, it helps identify those buildings and districts that should be given consideration at the local level. Thus, in recently devising a strategy to justify a larger appropriation of funds for the Historical Commission, Philadelphia City Councilman James Kenney suggested that Commission staff place nationally listed Philadelphia buildings onto the Philadelphia Register. If they’ve already been determined to be important, why not protect them?

This is exactly the question I’d like to ask. All month I’ve been watching the demolition of the John F. Kennedy Vocational Center on Schuylkill Avenue below the South Street Bridge. The former Marine Corps depot is making way for the Children’s Hospital of Philadelphia’s planned research center. The JFK Center is listed on the National Register, but not on the Philadelphia Register. Does preservation have to be so arbitrary? In thinking about this second question, another Philadelphia building on the National Register came to mind. The Wagner Free Institute of Science, built about a century before the JFK Center, has been well preserved, and tomorrow night hosts a really interesting film program, “Unedited Philadelphia: Girard to Lehigh.” What divides the fate of the two buildings? The Wagner is listed on the Philadelphia Register, but its National Landmark status has effectively allowed the Wagner’s administrators to draw resources to preserve the building. Here’s the story of both buildings.

The Wagner Institute–a handsome Greek Revival building at 17th and West Montgomery Avenue–found its origins in one William Wagner when he was apprenticing under the legendary financier Stephen Girard. Wagner was placed into the position of “supercargo” on Girard’s ships that traveled the world. A lifelong student of natural history, he took advantage of the opportunity to collect specimens of fossils, shells, and plants from every corner of the globe, which he continued into retirement. After retiring from his commercial life, he spent years traveling the world with his wife for even more collection.

By 1843, Wagner returned to Philadelphia and moved to Elm Grove, a suburban estate located on Stump Lane–a long-lost diagonal path that ran between what is now the corners of 17th and Berks & 15th and Cecil B. Moore. Wagner added a wing to his mansion and started displaying his illustrious collection and giving lectures to Philadelphians willing to take the journey beyond the city limits. Due to increasing popularity and a lack of space at Elm Grove, in 1855 Wagner moved his collection to the long-lost Spring Garden Hall at 13th and Spring Garden, formally bringing the Wagner Free Institute of Science into existence. 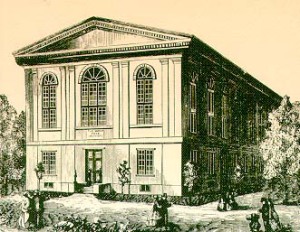 Upon learning that the City of Philadelphia would be reclaiming the old Hall for its own use, Wagner set aside the southern portion of his estate for a grand new building that would provide ample space for both display of his ever-growing collection of specimens. He commissioned John McArthur, Jr.–architect of the city’s finest new buildings of the period and future designer of Philadelphia City Hall–with very specific instructions for the plan.

The new hall would meet Wagner’s request for a stark, utilitarian design (by mid 19th Century standards) that would not distract from the specimens inside. Executed in what was then called the “Greco-Roman” style, MacArthur could not resist adding some of his personal flair: pilasters, windows with rounded tops, and some of the same facade decorations found in his other works from the same period.

The new Wagner Institute began construction in 1860 but was delayed by the Civil War. When completed in 1865, it featured 23,000 specimens, classrooms, a laboratory, and offered lectures in every possible scientific discipline delivered by the best professors and scientists in the area. Wagner himself taught the mineralogy course. During the next couple of decades, the city’s street grid grew northward into the old Elm Grove Estate. Wagner’s house stood until 1886. 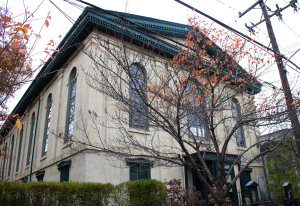 The longevity of the Wagner Institute has been secured by both historic designation status and the creative persistence of its board and staff | Photo: Michael Bixler

After Wagner death in 1885, a Board of Trustees appointed one of the area’s top scientific minds, Joseph Leidy, as director. In the six years Leidy ran the Institute, the collection of specimens was expanded, the educational programs enhanced, and a massive renovation of the building was commissioned under the designs of the firm of Collins and Audenreith, chosen due to their experience working under John McArthur decades earlier.

The renovation lasted five years. When the building re-opened in 1890, the windows were replaced, the interior refinished, and the exterior of the building was stuccoed (McArthur’s design originally included this stuccoed facade, but it was not completed when the building was first built). Leidy reorganized the display of the newly enlarged collection into the configuration it still has today.

In 1892, the Wagner Institute opened a public library inside that would go on to become Branch Number One of the Free Library of Philadelphia in 1895. A separate wing of the building was constructed in 1901 under the designs of G.W. and W.D. Hewitt to house this library branch, which stayed open until 1964.

To this day, the Wagner Free Institute of Science still serves the same function and displays the same specimens as it did during the Leidy period. While other organizations of its type either became or were absorbed by museums, universities, and libraries, this one survived into the 21st Century–but not without a little help.

The preservation of the building’s displays and configuration was the result of a lack of funding throughout the 20th Century. While others of its type stayed continuously current, the Wagner committed all of its meager resources to its educational programs and not the building and exhibits. When its financial situation became extremely dire in the 1980s, the Board of Trustees embarked on a strategic plan to re-invigorate the Institute and bring back awareness of its existence. The main catalyst in the Wagner’s rebirth was its nomination to the National Register of Historic Places in 1989 and its attainment of National Historic Landmark Status in 1990. 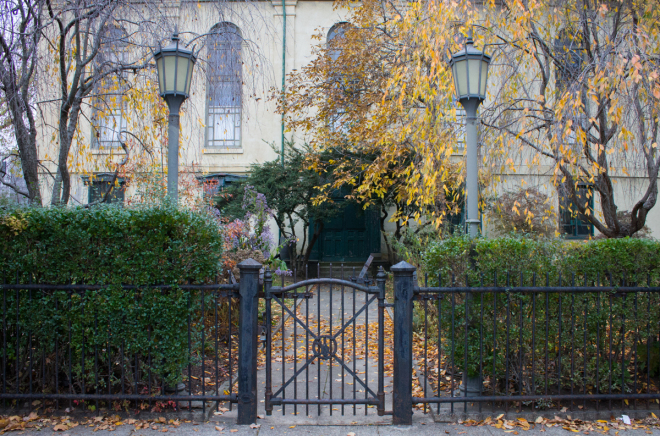 The National Historic Landmark designation allowed the Institute to apply for assistance from the National Park Service and apply to the J. Paul Getty Trust for an architectural preservation grant. National Register status allowed the Institute to be awarded a Keystone Preservation Grant from the Philadelphia Historical and Museum Commission. These grants and benefits allowed the Wagner Institute to gain increased public recognition. This in turn attracted more funding from other sources. As a result, this century-and-a-half-year-old institution endures.

Yet, while this old historic and almost perfectly preserved structure has managed to survive, a much younger, larger, and especially sturdy building–also on the National Register of Historic Places–is currently being demolished. 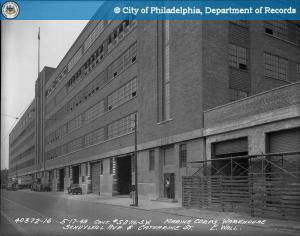 The Schuylkill Warehouse in 1949 | PhillyHistory.org

Warehouse Of The War

The Marine Corps Depot of Supplies Schuylkill Warehouse, a monstrous monolith with hundreds of thousands of square feet of interior space, kept its mountainous presence near the South Street Bridge for 73 years.

The U.S. Government acquired old industrial land at 730 Schuylkill Avenue in 1917, but made no plans for it until 1940, when the military set about expanding and modernizing itself in anticipation of the coming war. In September of that year, the government announced a new 432,283 square foot warehouse to be built on the site at a cost of $1.3 Million. German-born architect Eugene A. Stopper was commissioned for what would be his largest commission. Though known for more traditional designs, such as the Bell Atlantic Building (now called the Lofts at 1835 Arch), and the Jacques Ferber Store at 1708 Walnut, this massive structure would be in the Moderne style. The design is a superb example of the era’s architecture: a simple, seemingly endless facade with long horizontal bands of windows and a minimum of unnecessary ornamentation.

Construction on what would be initially known as the “Schuylkill Warehouse” and/or “Annex 2” was surprisingly rapid, and the building took only a year to build. When it opened in September, 1941, it stored small arms, optical instruments, military clothing, and other miscellaneous goods as part of a set of facilities throughout the city known as the Philadelphia Marine Corps Depot of Supplies. 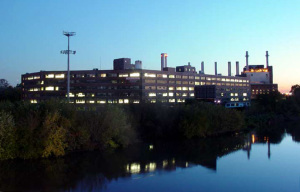 After the U.S. formally entered World War II, the Motor Transport Division of the Marine Corps moved into this building and became its primary occupant. This Division took in military vehicles either just-built in Detroit or purchased from other sources. The vehicles would be painted, lettered, repaired (if necessary), and stored in the upper floors. A Motor Transport School in the building trained personnel in the driving, repair, and maintenance of each vehicle. During this time, a section of the building roasted 80 bags of coffee per day to be distributed to all Marine Corps operations on the Eastern Seaboard.

The Marine Transport Division grew so large over the next year that a 114,118 square foot addition was completed by the end of 1943. Stopper also designed the addition, which included a new six-story section and an additional story on the original building.

The Marine Corps Depot of Supplies remained in Philadelphia until after the Korean War. In 1954, the division began a long transition of moving operations to Albany, Georgia. In August, 1960, the Comptroller General of the United States delivered a damning report about the facility, detailing gross mismanagement and unjustified expenditures. In 1964, the Schuylkill Warehouse was declared surplus federal property by the Department of Education, Health, and Welfare and was given over to the School District of Philadelphia.

In November, 1964, Stopper’s depot reopened as the John F. Kennedy Vocational Center, a training school for the unemployed. The JFK Center saw the construction of a short addition in 1970 and stayed active until 1980. Thereafter, it was used by the School District for offices and storage. The Marine Corps maintained a small presence at the building until the complete transfer of the Depot of Supplies to Georgia in 1975. 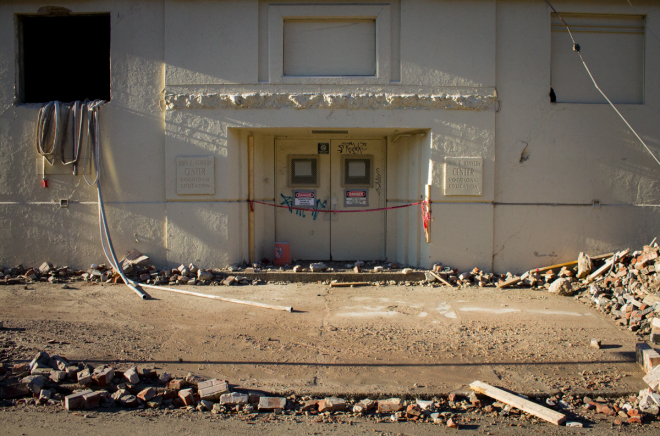 In 2003, the School District–in anticipation of moving to its current home at 440 North Broad Street–put the old warehouse up for sale. It was purchased in 2005 by Switzenbaum and Associates, who proposed a unique condo conversion that would have added two floors, had drive-up interior parking, and a renovation designed by Venturi Scott Brown. It did not pan out. The building has stood, empty, gutted and windowless ever since. In 2009, The Childrens’ Hospital of Philadelphia acquired the property.

Late in 2004, the Marine Corps Depot Schuylkill Warehouse was added to the National Register of Historic Places, presumably to increase the potential for development using historic tax credits in a rapidly changing neighborhood. That strategy unfortunately did not pan out, and another historic Philadelphia building has been chopped.