In Search Of The Source 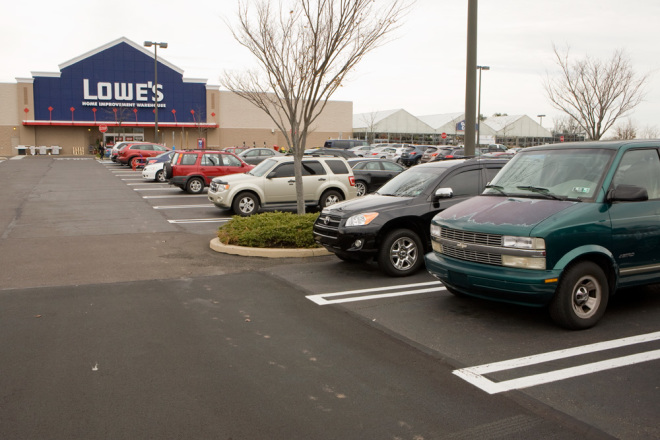 In my two and a half years living in Fishtown, I split my time pretty equally between Johnny Brenda’s and Penn Treaty Park. The latter gave me such an appreciation for the Delaware River. Just watching the tide roll in and out, carrying boats big and small up and downriver under the Ben Franklin Bridge, made me consider the entire thing—how it forms the distinct eastern shape of Pennsylvania, how it’s the longest undammed river in the eastern United States, how it meets the Atlantic Ocean under the whistle of the Cape May-Lewes Ferry. This infatuation led to an entire series of essays on the Delaware, a series which absolutely required a trip to the headwaters in the Catskills.

In my year living in Mt Airy, I’ve split my time pretty equally between Earth Bread & Brewery and Wissahickon Valley Park, following the many miles of trails through its crooked corners. The park’s 1,800 acres form a wildly irregular shape, as parkland straddles both sides of most of the tributaries within Philadelphia County—Cresheim, Gorgas, Carpenter, Andorra, Monoshone, etc—the nerves feeding the main spine of Wissahickon Creek as it drains to the Schuylkill River. But the park is only about a quarter of the Wissahickon’s watershed.

About 16 miles from the city limits (and about 23 from the Schuylkill River), Wissahickon Creek bubbles up from the earth; or at least it used to. Like the Delaware River at its highest reaches, the Wissahickon forms from two branches, each of which is now buried under suburban parking lots. As much time as I’ve spent along the Wissahickon this year, I felt it my duty to find these sources.

The aptly named Wissahickon Park is one of six parks in Lansdale Borough that abut or straddle the creek. The two branches of the creek come together at Knapp Road, the upper border of the park and borough. On the other side of Knapp Road is an unnamed Montgomery Township “natural area,” through which the two branches flow. 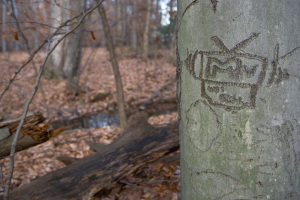 “I want my MTV.” A tree carving evidently from the 1980s along the tiny Wissahickon Creek in Montgomery Township | Photo: Bradley Maule

Following the slightly shorter, eastern branch (marked by a plaque on the bridge carrying Knapp Road over it as “Branch of Wissahickon Creek”) requires some bushwhacking, as no trail follows its course. A quarter-mile or so upstream, one encounters a double-barreled culvert that originates in the parking lot of the Montgomery Mall, on the Dick’s Sporting Goods and Wegman’s side.

The main branch is a little more rewarding. A trail parallels the creek for a little under a mile and peters out; to continue up the creek is to walk in its path, in the gravely plain, until you arrive in the back yards of the homes on Sunset Drive, where an 18-inch pipe carries it below.

Here, I saw a man on a riding mower and asked him if he knew the exact source of the Wissahickon Creek. He made a motion that went behind his house and toward a culvert in a neighbor’s back yard. With his blessing, I walked along the tiny creek, barely a foot across, that clearly demarcated properties. After passing a small wooden footbridge, a couple tool sheds, and a children’s play area with a beach shovel and pail, I saw the culvert.

“This is it,” I thought. “The mighty Wissahickon begins here.” Sort of. The Wissahickon Creek daylights at this outfall, in the back yard of a house in Montgomery Township. But its origins are just a little upstream, underground. Old brick storm inlets on Morningside Drive and Vilsmeier Road allow you to hear the flowing creek 5-10 feet below you.

And its utmost source, where a spring fed farmland as recently as 1971, is now a storm drain in the parking lot of Lowe’s store #1669. Womp-womp. 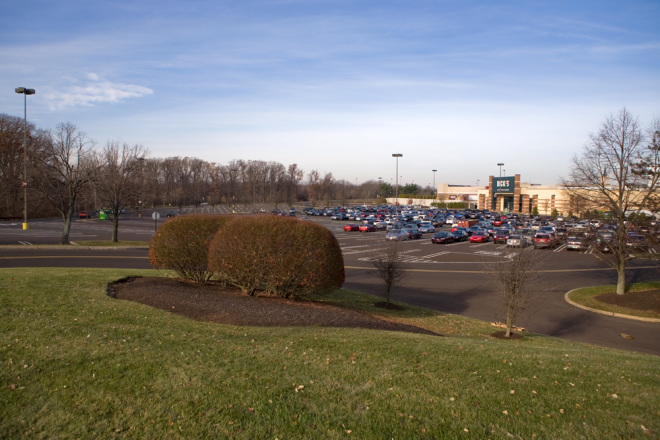 The eastern branch of the Wissahickon Creek’s headwaters start here, under the parking lot at Montgomery Mall; note the downward slope toward the left | Photo: Bradley Maule 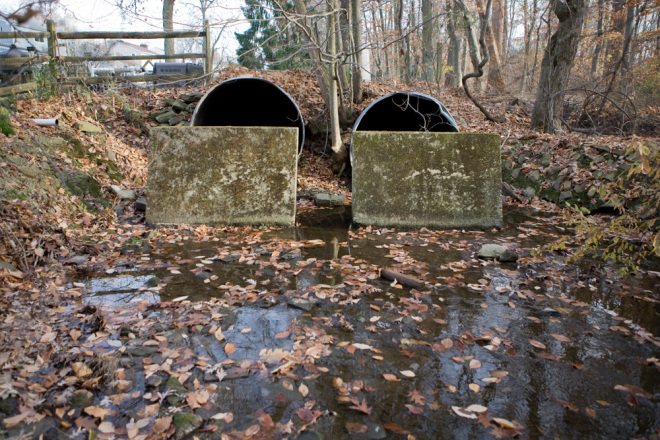 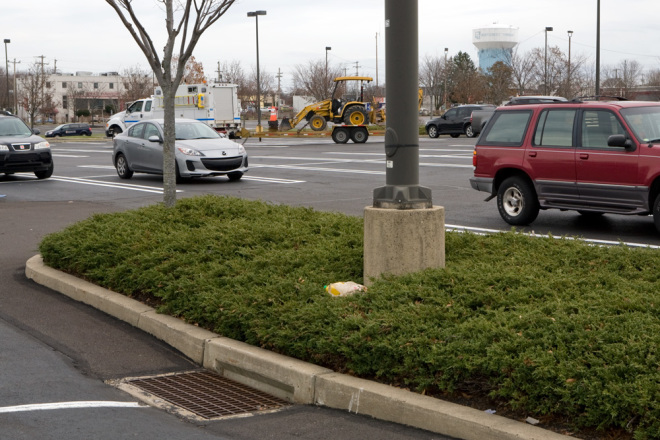 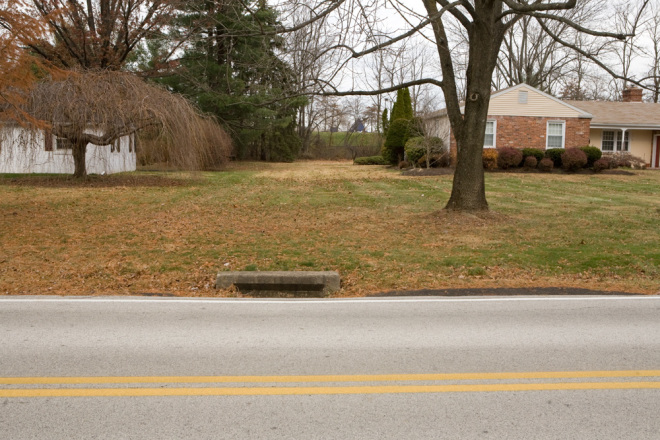 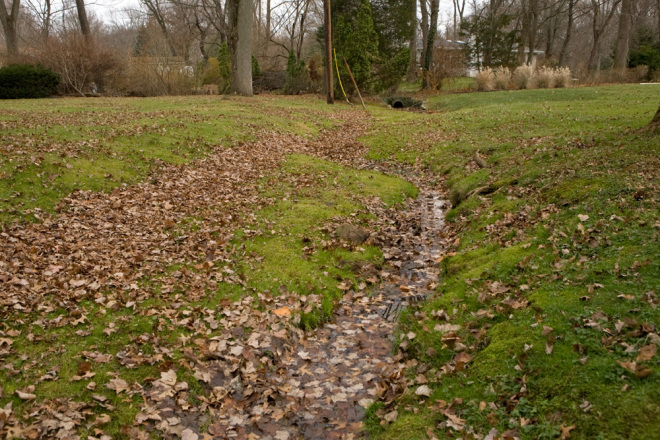 … until it first daylights here, in the back yards of homes on Sunset Drive. Note culvert in background | Photo: Bradley Maule 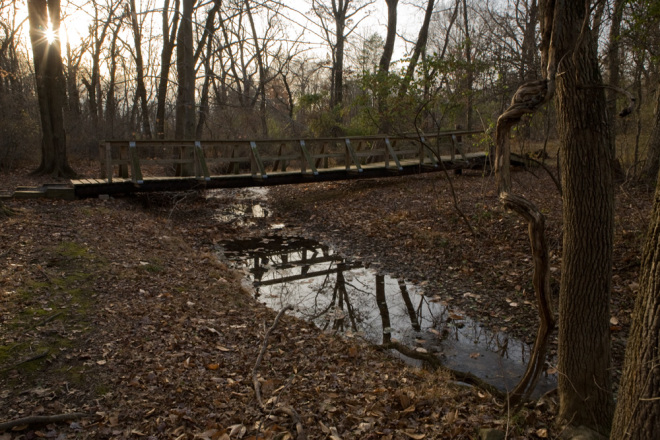 The first bridge of any significance over Wissahickon Creek is this wooden footbridge in the Montgomery Township “natural area” | Photo: Bradley Maule 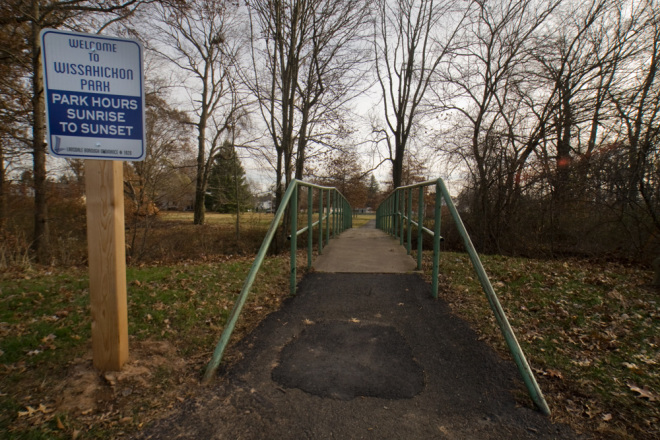 And finally, a little dignity. With a nod toward things to come, Wissahickon Creek enters Lansdale Borough at Wissahickon Park | Photo: Bradley Maule

* * *
The author would like to thank John Ferro of the Wissahickon Valley Watershed Association for his assistance in pinpointing the headwaters, and for turning him on to Penn Pilot, the Pennsylvania Geological Survey’s excellent resource of historical aerial maps hosted by Penn State.